Ever the coward, the PM has used fridges, hospital wards and even foreign conflicts to dodge scrutiny - and tricky TV interviews. 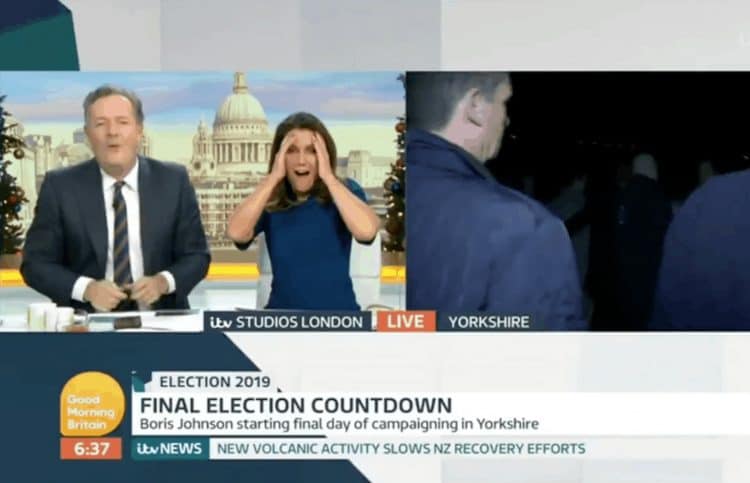 Boris Johnson has been accused of “running scared” after deciding to stay away from an emergency Commons debate on the rules for MPs following the row over Owen Paterson.

Downing Street said the prime minister was unable to get back to Westminster in time following a long-planned visit to an NHS hospital trust in Northumberland.

Instead, the Cabinet Office minister Stephen Barclay opened the debate for the Government amid continuing anger among some Tory MPs over the way the issue has been handled by ministers.

Sir Keir Starmer, who lead for Labour, said the prime minister had chosen to hide away rather than address the mess he had created.

“Boris Johnson does not have the decency either to defend or apologise for his actions. Rather than repairing the damage he has done, the Prime Minister is running scared,” he said.

“When required to lead, he has chosen to hide. His concern, as always, is self-preservation, not the national interest.”

But the prime minister has previous when it comes to hiding from scrutiny.

As David Schneider points out, this is certainly not the first time it has happened:

A maskless prime minister turned down a light-hearted offer of an endoscopy when he visited a hospital to praise staff for getting their Covid-19 vaccine booster jabs.

Boris Johnson said the “long-standing engagement” to be at Hexham General Hospital, Northumberland, meant he was unable to attend the parliamentary debate on standards.

Instead, he toured the hospital, praising staff for their efforts to carry on treating patients and undertaking operations despite the pandemic.

Mr Johnson watched as Myles Donnelly, a member of the estates team, received his booster jab and the Prime Minister revealed he had received his flu jab recently, saying: “I didn’t feel a thing.”

He then met staff on the orthopaedic ward, where patients were being prepared for surgery or recovering from it.

The Prime Minister chatted to nurses from the adjoining endoscopy unit, and one of them cheekily asked if he wanted to try the procedure.

Mr Johnson laughed: “I don’t think I need one just yet.”

Hidden in a fridge

Trying to avoid any hard questions that might make him look foolish in the run-up to the 2019 election, Johnson got up early to pretend to be a milkman at Greenside Farm Business Park rather than face the hard-edged political questioning of Good Morning Britain.

The then hosts Piers Morgan and Susanna Reid were gobsmacked as the Prime Minister bottled out of his promise to appear on their show while pretending to be on a milk round.

Reporter Johnathan Swain asked the PM if he would “deliver on your promise to talk to Piers and Susanna”.

Minders pushed reporters back as Boris Johnson could be seen hiding behind stacks of milk crates and disappearing into the large fridge at the dairy depot.

Boris Johnson skipped a vote on expandingHeathrow airport after previously telling voters he wouldlie down in front of bulldozers to prevent the go-ahead of a third runway.

The vote passed through the Commons by 415 votes to 119 – a majority of 296, with Tory MPs under orders to support the government.

Rather than backing the plans, the then foreign secretary flew to Afghanistan to visit troops.

Later, a Freedom of Information Request would reveal that the cost for three members of staff who accompanied the former Foreign Secretary totalled £19,366.

Labour’s shadow chancellor John McDonnell said the former foreign secretary should consider using his earnings from his Daily Telegraph column to pay back the cost of the visit.

He said: “Boris Johnson, who once said he would lie down in front of bulldozers to stop a third runway at Heathrow, scuttled out of the country at the taxpayer’s expense rather than honouring his promise to his constituents.

“Perhaps our former foreign secretary will consider using some of the money he earns insulting Muslim women with his lucrative £20,000-plus a month column to pay back the taxpayer.”

Boris Johnson was the only party leader to dodge an interview with Andrew Neil in the lead up to the 2019 election.

The ruthless broadcaster sent out a final appeal to the Prime Minister, saying the BBC has “been asking him for weeks now to give us a date, a time, a venue”.

But his plea fell on deaf ears.