Downing Street said Johnson couldn't make it back from the north-east in time for the Commons sleaze debate. 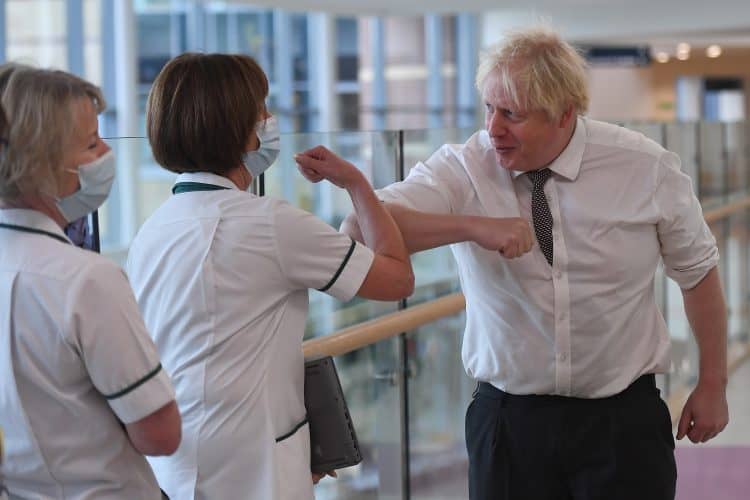 Boris Johnson has been accused of “running scared” after deciding to stay away from an emergency Commons debate on the rules for MPs following the row over Owen Paterson, until last week the MP for North Shropshire.

Downing Street said the Prime Minister was unable to get back to Westminster in time following a long-planned visit to an NHS hospital trust in Northumberland.

Instead the Cabinet Office minister Stephen Barclay will open the debate for the Government amid continuing anger among some Tory MPs over the way the issue has been handled by ministers.

Sir Keir Starmer, who will lead for Labour, said the Prime Minister had chosen to hide away rather than address the mess he had created.

“Boris Johnson does not have the decency either to defend or apologise for his actions. Rather than repairing the damage he has done, the Prime Minister is running scared,” he said.

“When required to lead, he has chosen to hide. His concern, as always, is self-preservation, not the national interest.”

The Liberal Democrats, who secured the emergency three-hour debate, said Johnson’s absence from the Commons chamber represented a “shocking failure of leadership”.

Chief whip Wendy Chamberlain accused the Prime Minister of trying to undermine the rules to avoid scrutiny of his own conduct – including over the lavish refurbishment of his Downing Street flat.

“A fish rots from the head down, and it’s the same with Boris Johnson’s corrupt and sleazy Government,” she said.

“From the redecoration of his flat to holidays reportedly paid for by Tory Party donors, the Prime Minister has serious questions to answer about his own integrity and allegations he has breached parliamentary standards.

“It looks very much like Boris Johnson was trying to use Owen Paterson’s case to get himself off the hook, which would be a new low even by his standards.”

Speaking to reporters during his visit to Hexham General Hospital, Johnson refused to be drawn on the chaotic events of last week.

However, he welcomed moves by the Commons Speaker Sir Lindsay Hoyle to forge a cross-party consensus on reform of the way the standards system operates.

A spokeswoman for Sir Lindsay indicated that he would address MPs at the start of the debate.

Johnson said: “I think it is very important that we get this right. We are going to hold MPs to account. MPs should not break the rules.

“If there is anything positive to come out of the whole thing it is that as far as I can make out the Speaker is determined to try to move us all forward with a system whereby we have a cross-party approach, which is what we were trying to achieve last week.”

Many Tories are still smarting after being ordered last week to vote for a new committee to consider a new system of appeals for MPs found to have broken the rules, only for the Government to backtrack after the opposition parties refused to co-operate.

In the bitter aftermath of the row, Paterson, the former cabinet minister at the centre of the dispute, announced he was quitting as MP for North Shropshire blaming the “cruel world of politics”.

It followed a recommendation by the Commons Standards Committee that he should be suspended from Parliament for six weeks after committing an “egregious” breach of the centuries old ban on paid lobbying by MPs.

Paterson had hoped to challenge the finding through a new appeals system but there was anger among MPs on all sides of the House at the way ministers had sought to conflate his case with wider reform of the system.

Speaking ahead of the debate, Sir Lindsay Hoyle said MPs now needed to move forward after a “very dark week for Parliament”.

“I don’t want another week like that, we’ve got to move forward,” he told Sky News.

“This House matters to me, the MPs matter, the people who work here matter to me, and what I don’t want is another dark week like last week.

“I want to make sure the public have faith in parliamentarians and faith in the House of Commons, and today’s debate will be painful, but the one thing is, it’s got to cleanse the House to move forward.“