Trying to block PN’s return while flying the rainbow flag is rank hypocrisy on the part of the Home Office. It is clear they are trying to cover up the miscarriage of justice that was done to her. 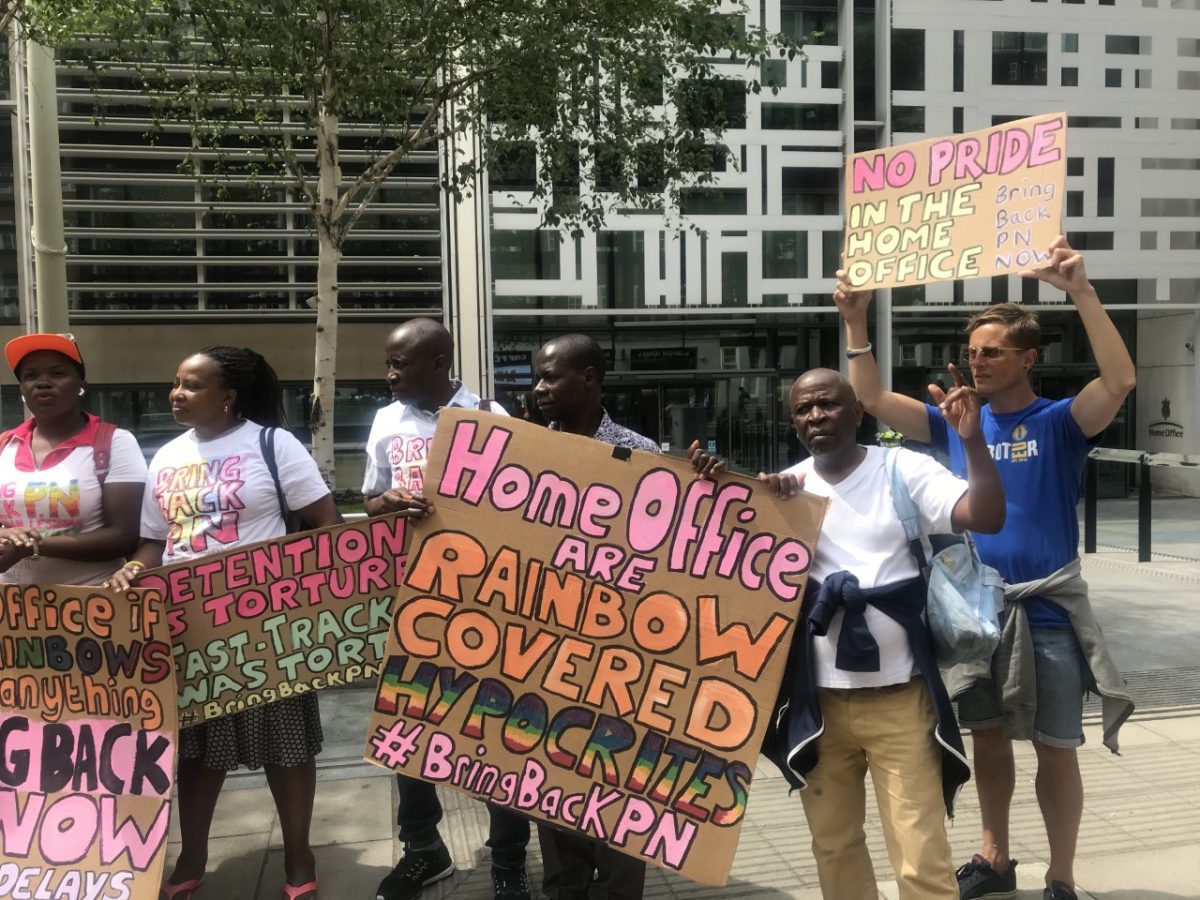 At the same time that the Home Office joined the Pride Parade in London and while it flies the rainbow flag this LGBT Pride month, it has decided to appeal against a High Court order to bring back Ugandan Lesbian PN, who was deported in 2013 under the now-unlawful Detained Fast Track system.

PN has been living in hiding since her removal in December 2013.

As a lesbian and a 25-year old woman living alone Uganda, and as an asylum seeker sent back from the UK, she lives in daily fear of discovery and violence.

She has fought to survive the resulting and serious mental health problems and deteriorating physical ill-health, and the periods of homelessness.

She has continued to fight for her right to asylum in the UK, against her unjust removal under Fast Track. Movement for Justice has been with her every step of the way since she was detained in the notorious Yarl’s Wood detention centre.

“I didn’t get a fair hearing, the Home Office must do what the High Court judge told them to do. I want my life back. I am a lesbian, I don’t want to live in fear anymore” – PN

The judgement that quashed the decision in PN’s 2013 asylum appeal and ordered the Home Office to bring her back to the UK (PN v Secretary of State for the Home Department [2019] EWHC 1616)[1] is part of a series of on-going cases where people are challenging negative asylum decisions made under the now-unlawful Fast Track system.

The government’s Fast Track system was ruled unlawful because it denied people the time and legal advise it takes to make an adequate asylum case.

PN is the very first person whom the Home Office has been ordered to bring back because their asylum claim was unfairly processed.

“In all the circumstances, and principally because the claimant had been unlawfully deprived of her statutory right of appeal within the United Kingdom and would be required to appeal from a country where she claims she faces a real risk of persecution, it is appropriate to order that the defendant use his best endeavours to facilitate the claimant’s return to the United Kingdom to proceed with her appeal against the rejection of her claim for asylum. The other factors relied upon do not outweigh those conclusions and, at least in one respect (the ability of the claimant to give live evidence at the appeal hearing) are consistent with facilitating the return of the claimant to proceed with her appeal,” said High Court Judge Justice Lewis. [2]

Instead of accepting this judgement and bringing PN back to prepare for the new appeal she is entitled to, the Home Office has decided to appeal against the High Court’s ruling. The High Court rejected its request for permission to appeal, but on Friday 5th July – the day before they marched on the London Pride Parade – the Home Office submitted an application to the Court of Appeal for permission to proceed, this could delay PN’s return for many months, if not longer.

Trying to block PN’s return while flying the rainbow flag is rank hypocrisy on the part of the Home Office. It is clear they are trying to cover up the miscarriage of justice that was done to her.

By preventing her return they are endangering her life and continuing to deny her right to a fair hearing.

If the Government’s stated commitment to LGBT+ Equality means anything they should be doing everything to bring home PN.

PN’s victory is a huge step forward for asylum rights and LGBTI+ rights. It is a serious set-back for the Home Office’s attempts to bring back some form of Fast Track.

Today we protested on her behalf outside the Home Office.

Speaking from Uganda, PN voices the hopes of thousands of other who suffered the injustice and inhumanity of the Home Office, when she says, “I didn’t get a fair hearing, the Home Office must do what the High Court judge told them to do. I want my life back. I am a lesbian, I don’t want to live in fear anymore.”

By Karen Doyle, Movement For Justice.

[2] Analysis of the significance of this decision https://www.freemovement.org.uk/home-office-ordered-to-bring-ugandan-asylum-seeker-back-to-the-uk-five-years-after-removal/