President Donald Trump has been accused of racism over his attack on four congresswomen, and Theresa May made plain her discontent. 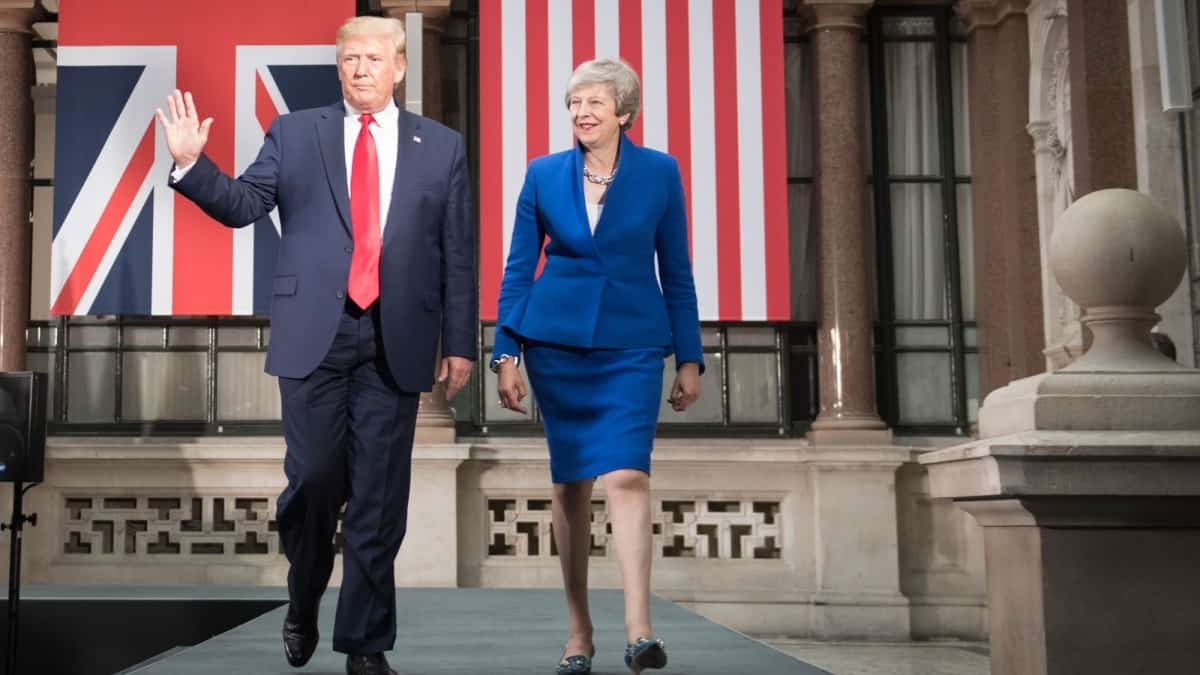 A fresh row has broken out between Donald Trump and the UK Government as Theresa May hit out at his “completely unacceptable” language after the US President was branded racist over a Twitter outburst.

All are US citizens, and only one is foreign-born.

In a tweet on Sunday night, Donald Trump said it was “so sad” to see Democrats supporting the women.

While Mr Trump did not name the four, he is believed to have been referring to congresswomen Alexandria Ocasio-Cortez, Ilhan Omar, Ayanna Pressley and Rashida Tlaib. Only Ms Omar, from Somalia, is foreign-born.

“Her view is that the language which was used to refer to the women was completely unacceptable,” the Prime Minister’s official spokesman said.

The spokesman said he was not aware of any plans for Mrs May to speak to the president.

Scotland’s First Minister Nicola Sturgeon said the president’s comments were “not OK and diplomatic politeness should not stop us saying so, loudly and clearly”.

Mr Trump hit out at the congresswomen “who originally came from countries whose governments are a complete and total catastrophe, the worst, most corrupt and inept anywhere in the world” and suggested “why don’t they go back and help fix the totally broken and crime infested places from which they came”.

And rather than apologise at the racism, he doubled down on his Twitter assault, insisting the congresswomen shoudl be apologising.

His comments led to attacks from senior Democrats, with presidential hopeful Elizabeth Warren condemning the “racist and xenophobic attack” and another 2020 contender, former Texas representative Beto O’Rourke saying “this is racist”.

Despite the backlash over his comments, Mr Trump remained unrepentant on Monday, suggesting the congresswomen should apologise.

The latest row follows the storm created by the leak of sensitive diplomatic messages from the UK’s ambassador in Washington, Sir Kim Darroch, which prompted the envoy’s resignation.

The Metropolitan Police are investigating the leak, but have been accused of being “heavy handed” in their approach to the reporting of further releases.

In the latest leak, this weekend it was revealed diplomatic that the ambassador informed then Foreign Secretary Boris Johnson that Trump only wrecked the Iran nuclear deal to spite his predecessor President Obama.

Former Brexit secretary David Davis called for senior officer Neil Basu to be pulled from the investigation after he urged journalists in possession of leaked Government documents to return them, warning any further publication from the dispatches could result in prosecution.

Mr Davis wrote to the Times accusing Mr Basu of “straying beyond his brief” and called for commissioner Cressida Dick to put the investigation in the hands of “an officer who puts preservation of our free press ahead of protection of the state’s reputation”.

He wrote that prosecuting journalists for “embarrassing the state is not what we do in the UK”.

Meanwhile, the chairman of the Digital, Culture, Media and Sport committee Damian Collins urged the force to focus on the leaker, rather than the media publishing the leaks.

He told the Sun: “The Metropolitan Police should… make it clear that there is no legal risk for newspapers freely reporting on the leaked documents.

“Neil Basu’s statement was clearly a threat aimed at newspaper editors encouraging them not to report on a story, in which there is clear public interest.”

The Prime Minister’s official spokesman said: “The leak was completely unacceptable and the person who leaked the documents should now face the consequences.

“I’m not going to comment on an ongoing investigation and it’s important that the police are now able to get on with their work.”

The investigation to identify the leaker “has the Government’s full support”, the spokesman said.

“On press freedom, the Prime Minister’s views are very well known – as she has said, a free press is one of the foundations on which our democracy rests.”

Sir Kim resigned last week saying his position had become “impossible” following the leak of diplomatic cables in which he described Donald Trump’s White House as “inept” and “dysfunctional”.

The Mail on Sunday released further details of his correspondence, including a memorandum from May 2018 in which the ambassador suggested Mr Trump had decided to pull out of the Iran nuclear deal in an act of spite because it was agreed by his predecessor Barack Obama.