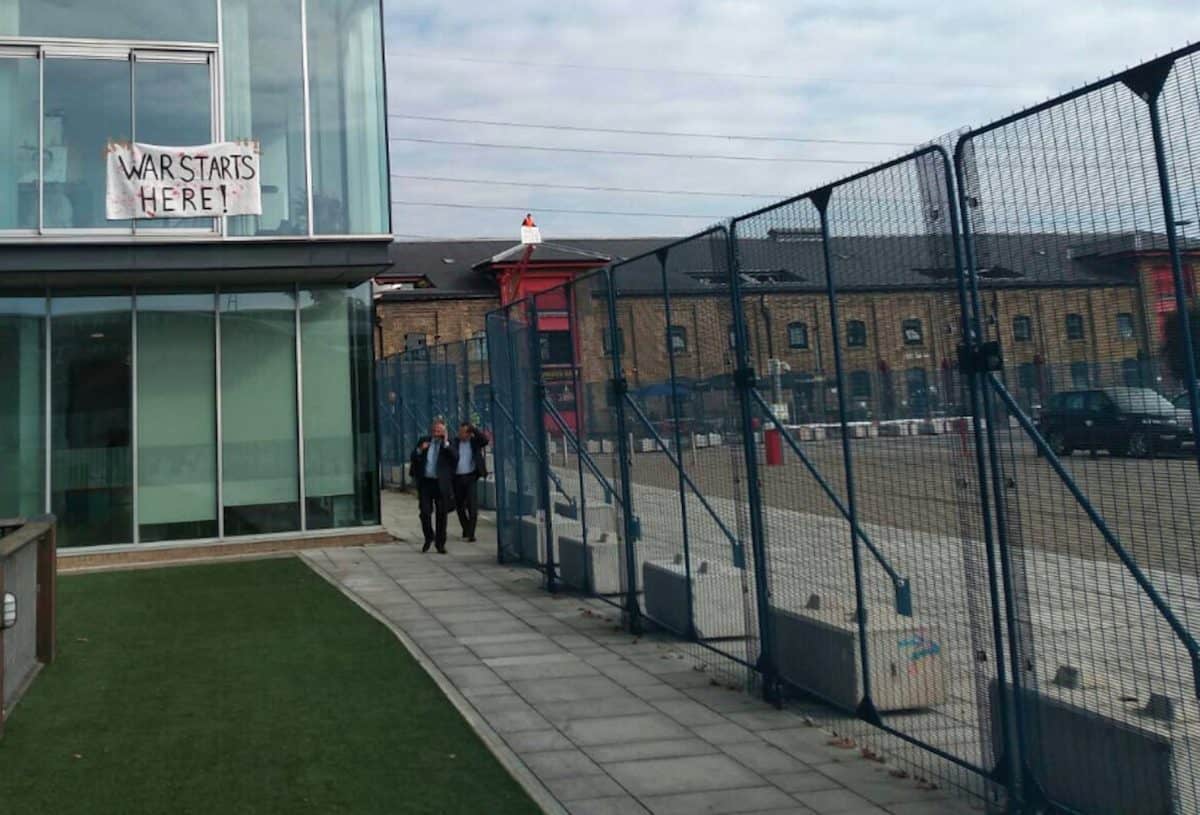 The DSEI arms fair opens at the Excel Centre in East London today amid accusations that the 68 delegations on the guest list, includes a ‘who’s who’ of human rights abusers.

Over 100 people have been arrested for taking action to stop the set-up of the arms fair at which government ministers will be rubbing shoulders with delegates from despotic regimes.

Defence & Security Equipment International 2019 (DSEI) is one of the biggest arms fairs in the world. It runs from 10-13 September.

68 international delegations have been invited to London for the event, including representatives from the Saudi Arabian regime, and all of its coalition partners that are bombing Yemen.

This as a new report from the United Nations has found that the UK and other arms exporting nations could be complicit in Saudi war crimes in Yemen due to the arms sales, intelligence and logistical support they have provided.

The report noted: “The legality of arms transfers by France, the United Kingdom, the United States and other States remains questionable, and is the subject of various domestic court proceedings.”

The Tories have licensed £6.3 billion worth of arms to Saudi-led forces in first 4 years of Yemen bombing. This despite the crisis becoming the greatest humanitarian disaster in the world according to aid agencies, including the UN who warn 20 million people are at risk.

In total, the guest list includes representatives from eight governments that feature on the Foreign and Commonwealth Office’s list of ‘human rights priority countries.’ The countries that feature on the watch list are Bahrain, Bangladesh, Colombia, Egypt, Israel, Pakistan, Saudi Arabia, Uzbekistan.

Over 2000 people have taken action to protest and disrupt the event with over 100 arrests.

Protestors argue that DSEI would not be possible without the support of the UK Government. It is supported by the Department of International Trade and the Ministry of Defence, with the Secretary of State for International Trade Liz Truss and the Defence Minister Ben Wallace both due to speak at the event where 1,600 companies advertising weapon and defence technology attend.

Andrew Smith of Campaign Against Arms Trade said: “The guest list for DSEI reads like a ‘who’s who’ of despots, dictatorships and human rights abusers. They are in London for one reason only, and that is to buy as many weapons as possible. There is no way of knowing how these weapons will be used or who they will be used against.

“DSEI exposes the hypocrisy at the heart of UK foreign policy. The Government may talk a lot about the importance of human rights and democracy, but it is arming and supporting some of the most abusive regimes in the world.”

The UK has also licensed over £360 worth of arms to Israel since the bombing of Gaza in 2014 and despite Israel flouting countless UN resolutions over occupied territories. Israeli Prime Minister Binyamin Netanyahu was in the UK to meet Boris Johnson as Israeli military ​and industry representatives prepared to buy and sell weponry at DSEI.

Since the ‘Operation Protective Edge’ military assault on Gaza, which killed 2,251 people, including 1,462 civilians, the UK has licensed over £361 million worth of arms to Israel. Licences include components for drones, combat aircraft and helicopters. 2017 saw a £183 million licence for ‘technology for military radars.’ ​​

In 2014, Tory peer Baroness Warsi resigned in opposition to the continued arms sales. A review by the government at the time found 12 licences for arms which are likely to have been used in the 2014 war.

Andrew Smith of Campaign Against Arms Trade said: “Netanyahu is responsible for years of terrible atrocities against Palestinian people. By arming and supporting his administration the UK Government has made itself complicit in those abuses. Tensions in the regions are only escalating and if weapons continue to be sold then it is only a matter of time before they are used again.

“Boris Johnson and his colleagues should be using their influence to push for peace and regional disarmament, not promoting arms sales.”

Anti-nuclear Trident Ploughshares campaigners, along with Extinction Rebellion have also been protesting against DSEI.

They seek to highlight the actions of the likes of Lockheed Martin in targeting civilians and threatening mass destruction.

Lockheed make the Trident D5 missiles which are based at Faslane in Scotland as well as manufacturing the fighter jets that the UK government have arranged to be sold to Saudi Arabia and which are being used in its bombing campaign on Yemen, where civilians are being killed.

Trident Ploughshares are calling on the UK government to stop the arms sales to countries like Saudi that are using them to commit gross violations of international law and to sign the Treaty on the Prohibition of Nuclear weapons and to disarm the Trident nuclear weapons system.