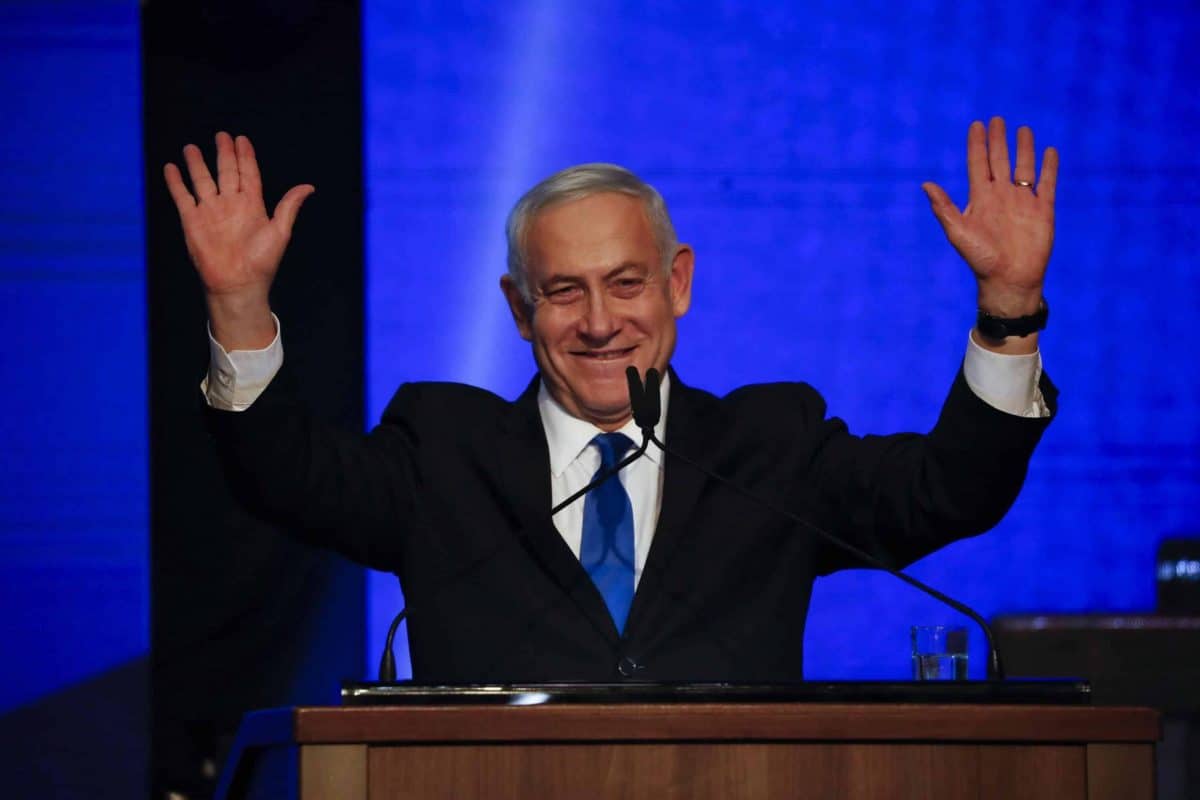 Prime Minister Benjamin Netanyahu is facing an uphill battle to hold on to his job, which is the only fail-safe way for him to avoid prosecution for corruption allegations.

Addressing a half-empty hall at his right-wing Likud campaign headquarters in Tel Aviv, he insisted he would form a “strong, Zionist government.”

“There won’t and cannot be a government supported by anti-Zionist Arab parties who deny the existence of Israel as a Jewish and democratic state, who glorify bloodthirsty terrorists who murder our soldiers,” Netanyahu added.

He warned against a “dangerous, anti-Zionist government” which would involve forming a unity coalition which involved Palestinian parties.

What are the latest Israeli election results?

Netanyahu said he had already been talks with potential coalition partners among right-wing and ultra-religious parties. “They all committed to pursue our goals together,” Netanyahu insisted, as his supporters chanted “We don’t want unity.”

Full election results are due on Wednesday afternoon, but on Wednesday morning so far, Netanyahu’s Likud and Benny Gantz’s Blue and White parties, based on partial results, are currently tied at 32 seats each.

This is a real blow for Netanyahu, who was hoping for an outright lead for him and his right-wing and orthodox religious parties, not least to give him immunity from corruption charges.

The third largest party is likely to be the Joint List, an alliance of four Palestinian Arab parties, with 12 seats.

Ultra-Orthodox Shas – which as always has come out in support of Netanyahu – has nine seats, followed closely by United Torah Judaism with eight. Ayelet Shaked’s right-wing alliance Yamina has seven seats, according to the partial results, followed by Labor-Gesher with six seats and the Democratic Union with five.

Can Likud or Blue White form a coalition?

Neither Likud nor Blue and White, with its smaller respective allies, could control a majority in the 120-seat parliament without the support of Avigdor Lieberman’s Yisrael Beitenu party which is projected nine seats.

That puts Avigdor Lieberman, a former protege of Mr Netanyahu who has become one of the PM’s fiercest rivals, in the position of kingmaker.

Lieberman refuses coalition with ultra-religious parties and has been campaigning against their influence on politics and for orthodox religious Jews to have to perform national service the same as all other Israelis.

However the controversial champion of secular Israelis is also a hardline right-wing hawk and Lieberman has ruled out coalition with parties that include Palestinian Israelis.

He has said the “one and only option” on the table is a secular unity government between his Yisrael Beitenu party, Likud and Blue and White – but that is also problematic.

Mr Gantz, a former military chief, notorious for attacks on the Gaza strip, has ruled out participating in a government led by Netanyahu at a time when the PM is expected to be indicted on corruption charges in the coming weeks.

What are the corruption charges Netanyahu faces?

Mr Netanyahu desperately sought an outright majority with his hard-line and ultra-Orthodox allies in hopes of passing legislation to give him immunity from his expected indictment.

A formal indictment would increase the pressure on Mr Netanyahu to step aside if he does not have immunity.

The election is the second this year after a deadlocked result in April.

The partial results released on Wednesday by the Central Election Commission were based on 35% of the vote counted.

Three Israeli TV channels reported the same outcome, based on more than 90% of the vote counted, but did not explain the discrepancy with the commission’s percentage.

According to the partial results, Likud with its natural allies of religious and ultra-nationalist parties mustered 56 seats — or five short of the needed majority.

Addressing his supporters early on Wednesday, Mr Netanyahu refused to concede defeat and vowed to work to form a new government that excludes Arab parties.

His campaign focused heavily on attacking and questioning the loyalty of the country’s Arab minority – a strategy that drew accusations of racism and incitement from Arab leaders.

In the hung election five months ago, Likud supporters were also seen filming in polling stations where Israeli Arab voters would go – under the pretext of preventing electoral fraud – but intimidating many to desert the poll.

With these areas among the last to be counted, it remains to be seen if Israeli Arabs were determined not to let their vote be stifled again, or if many as is customary have boycotted the Israeli election.