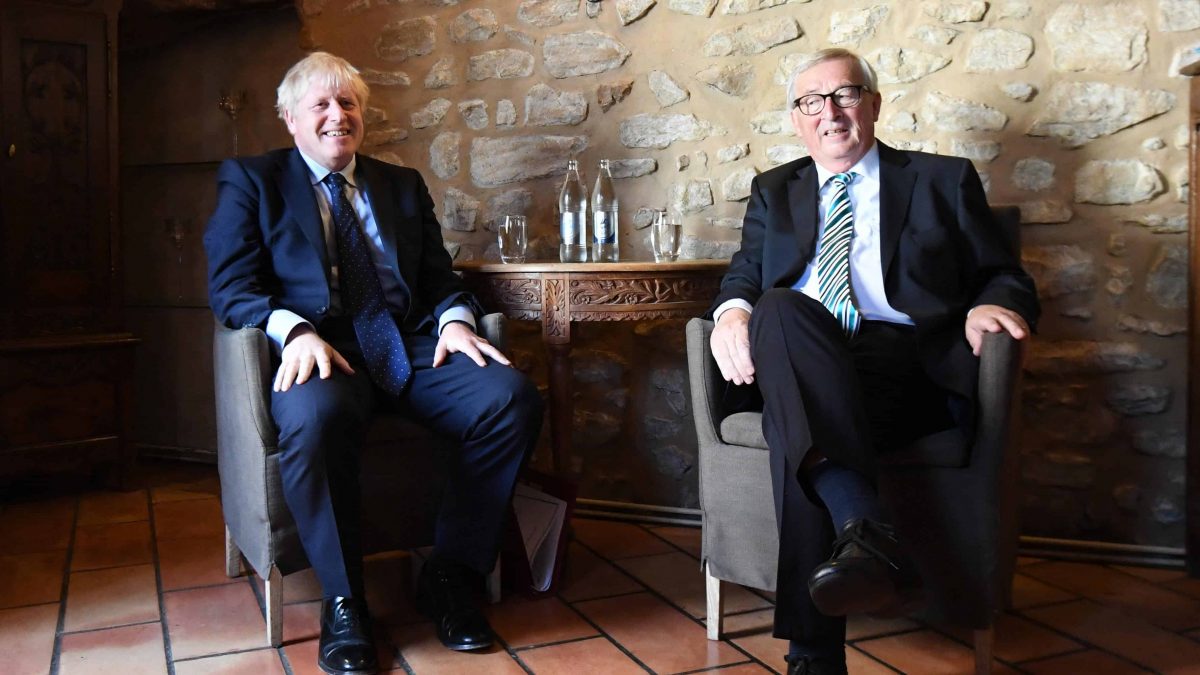 It was their first meeting since Boris Johnson became PM in July, though they have spoken on the phone.

Writing in the Daily Telegraph ahead of the meeting, Mr Johnson said he was working “flat out” for an agreement but that he would force through Brexit even if a deal cannot be reached at the European Council summit next month.

“But be in no doubt that if we cannot get a deal – the right deal for both sides – then the UK will come out anyway,” he added.

However if anybody is under the illusion that Boris Johnson – who used the comic book Hulk as an analogy in the Mail on Sunday – is talking tough but has an actual realistic alternative to the EU Withdrawal deal his predecessor Theresa May negotiated, they should by now have been disabused by the desertion of many previously loyal Tory MPs.

And today the EU confirmed what everybody already knows – Boris Johnson still has no alternative to offer to the backstop which guarantees Irish stability is not wrecked with a hard border when the UK leaves the EU.

“Such proposals have not yet been made”

Operational proposals to replace Brexit backstop “have not yet been made” by Boris Johnson or his negotiating team, the EU confirmed.

The commission said the Government had still not made “legally operational solutions” to replace the controversial Irish backstop element of the Brexit divorce deal, which keeps the UK closely tied to EU rules in order to avoid a hard border.

A European Commission statement released following the working lunch at Luxembourg City’s Le Bouquet Garni restaurant said: “President Juncker recalled that it is the UK’s responsibility to come forward with legally operational solutions that are compatible with the Withdrawal Agreement.

“President Juncker underlined the Commission’s continued willingness and openness to examine whether such proposals meet the objectives of the backstop. Such proposals have not yet been made.”

Both Brexit Secretary Steve Barclay and the EU’s chief negotiator Michel Barnier were at the lunchtime meeting with the Prime Minister and commission president.

Downing Street said the meeting was “constructive” and contact between the two sides would be stepped up.

A Downing Street spokeswoman said: “The Prime Minister reconfirmed his commitment to the Good Friday/Belfast Agreement and his determination to reach a deal with the backstop removed, that UK parliamentarians could support.

“The Prime Minister also reiterated that he would not request an extension and would take the UK out of the EU on October 31.

“The leaders agreed that the discussions needed to intensify and that meetings would soon take place on a daily basis.

“It was agreed that talks should also take place at a political level between Michel Barnier and the Brexit Secretary, and conversations would also continue between president Juncker and the Prime Minister.”

The UK side believes it has put forward suggestions on issues including an all-Ireland approach to checks on plant and animal products.

But Mr Johnson’s Government is reluctant to produce fixed, written proposals, with Whitehall sources saying they fear the EU side will just “trash it” in public unless the timing is right and Brussels has shown it is open to the possibility of making changes.

Ahead of the meeting, Mr Johnson said he was working “flat out” to reach an agreement with the EU, but reiterated that he would take the UK out of the bloc even if a deal cannot be reached at the European Council summit next month – despite the legislation passed by Parliament requiring him to seek an extension in order to avoid crashing out without a deal on Halloween.

Will Boris break the law?

The law passed by Parliament after MPs seized control of Commons business requires the Prime Minister to seek an extension to the Brexit process if a deal has not been reached by October 19.

But Foreign Secretary Dominic Raab suggested the Government was still examining the implications of the “deeply, deeply flawed” legislation – fuelling speculation Mr Johnson may try to find a loophole to avoid seeking a delay.

Downing Street said the Prime Minister could both ensure the UK left the European Union come what may on October 31 and comply with the law.

Asked how those two things could be compatible, the Prime Minister’s official spokesman said: “I’ve avoided getting into any of that beyond saying that governments comply by the law but we will be leaving on October 31.”

Over the weekend, Mr Johnson likened Britain leaving the EU to the Incredible Hulk breaking free from manacles.

But former justice secretary David Gauke told BBC Radio 4’s Today: “Maybe the Incredible Hulk doesn’t have to comply with the law, but the British Government does.”

Ahead of the meeting with Mr Johnson, Mr Juncker used an interview on German radio to warn “time is running out” for an alternative Brexit agreement, as he suggested no-deal was unpatriotic.

The Prime Minister faced a barrage of chanting from pro-EU protesters as he left the two-hour lunch with Mr Juncker.

“Go home Boris” and “stop Brexit” were among the loudest cries directed at the Prime Minister after leaving the restaurant with the European Commission president.

A Downing Street source said any further delay would be a “huge mistake” which would pile on “additional long months of rancour and division”.

“This is why the PM will stress to Mr Juncker that, while he wants to secure a deal, if no deal can be agreed by October 18 his policy is to leave without a deal on October 31 – and reject any delay offered by the EU,” the source said.

The Benn Act passed by Parliament after MPs seized control of Commons business requires the PM to seek an extension to the Brexit process if a deal has not been reached by October 19.

Foreign Secretary Dominic Raab contradicted himself while tying himself in knots when asked if the government would obey the law of the legislation.

“At the same time, the legislation that was required, the surrender bill, is deeply, deeply flawed.”

Downing Street has sought to downplay speculation that Monday’s meeting would be a breakthrough moment and Mr Barclay said on Sunday that while there was still “significant work” to do to reach an agreement, a “landing zone” for a deal was in sight.

With Mr Johnson needing to break the deadlock in Parliament, he must find an alternative to the Irish backstop, which aims to prevent a hard border returning to the island of Ireland.

“Time is running out”

There have been suggestions that the PM is planning an alternative that would keep Northern Ireland more closely aligned with the EU than the rest of the UK.

Mr Juncker, in an interview on German radio, said “time is running out” for an alternative, as he suggested no-deal was unpatriotic.

Mr Johnson was due to meet the Luxembourg’s current prime minister, Xavier Bettel, for further talks in the afternoon.