The timely artwork, titled 'Devolved Parliament', may become Banksy’s most expensive artwork, and is expected to sell for more than £1.5M, according to auctioneer Sotheby’s.

by Ben Gelblum
in Arts 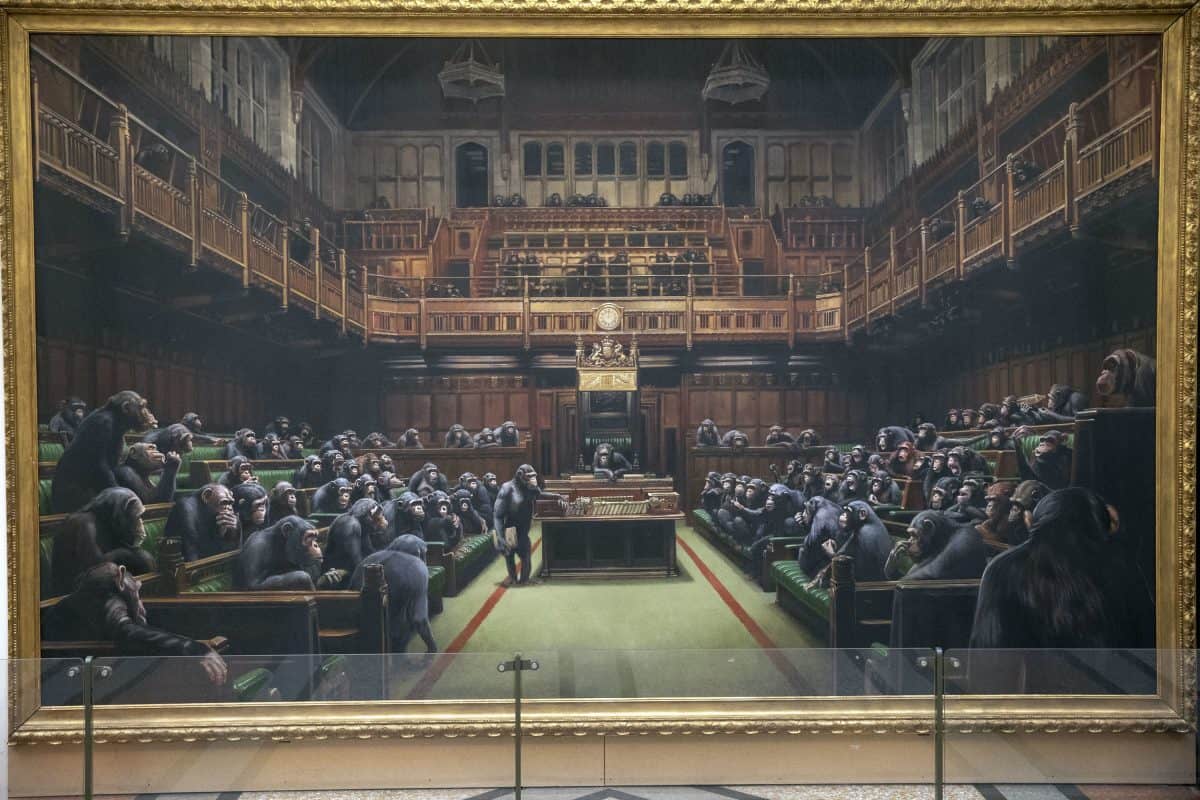 A Banksy painting showing the House of Commons packed full of chimpanzees is to be auctioned and could fetch a record £2m for one of the artist’s creations.

The artwork, titled ‘Devolved Parliament’, was completed by the famous artist in 2009 and is expected to sell for £1.5 – 2 million, according to auctioneer Sotheby’s.

Banksy’s current auction record stands at £1.87 million for Keep It Spotless, sold in New York in 2008.

The painting goes on sale on October 3 just weeks before the Brexit deadline of October 31 and with the House of Commons suspended as Boris Johnson has lost the backing of a majority of MPs over his refusal to rule out a no-deal brexit.

The anonymous artist created ‘Devolved Parliament’ for the takeover of the Bristol Museum a decade ago, which attracted more than 300,000 visitors.

Banksy said his painting of politicians as chimpanzees went back on public display at the Bristol Museum and Art Gallery in time for March 29 – the original date of Brexit to “mark Brexit day”.

Banksy posted a photo of the chimp piece on his Instagram account at the time, along with a caption reading: “Devolved Parliament. I made this ten years ago.

“Bristol museum have just put it back on display to mark Brexit day.”

He ended the post with: “Laugh now, but one day no-one will be in charge.”

Chimpanzees first appeared in Banksy’s work in 2002, with his piece Laugh Now.

The painting shows a row of apes wearing aprons carrying the inscription “Laugh now, but one day we’ll be in charge”.

In 2009, Banksy said of Devolved Parliament: “You paint 100 chimpanzees and they still call you a guerrilla artist.”

Alec Branczik, European head of contemporary art at Sotheby’s, said: “Regardless of where you sit in the Brexit debate, there’s no doubt that this work is more pertinent now than it has ever been, capturing unprecedented levels of political chaos and confirming Banksy as the satirical polemicist of our time.”

It stands at 13 feet across, making it the artist’s largest known canvas.

A woman takes a picture of the artwork (Steve Parsons/PA)

The painting will be auctioned in the same room where Banksy shocked the world by shredding one of his works a moment after it was sold last year.

The auction takes place almost a year after Banksy’s Girl With The Balloon self-destructed as the gavel came down at Sotheby’s, becoming the freshly titled Love Is In The Bin.

READ MORE: “Laugh now, but one day no-one will be in charge” – Banksy marks “Brexit day”