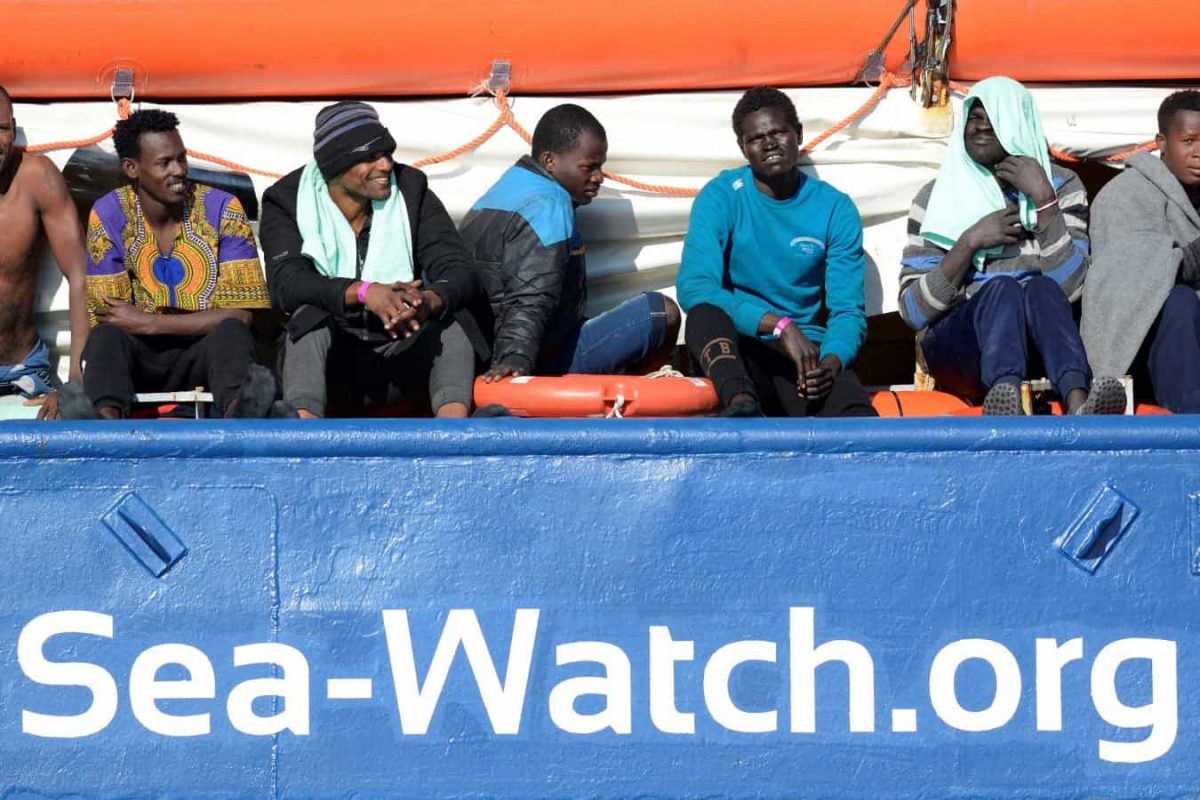 FILE PHOTO: Migrants rest on board the Sea Watch 3 off the coast of Siracusa, Italy, January 27, 2019. REUTERS/Guglielmo Mangiapane/File Photo

European countries are set to withdraw sea patrols altogether that have saved the lives of thousands making the risky crossing across the Mediterranean from North Africa. Not only are ships to be withdrawn but rescuing migrants is being criminalised.

The EU’s five-year action plan is focussed on restricting help to those making the crossing amid warnings that puts many more lives at risk.

United Nations data shows irregular sea arrivals from the Middle East and North Africa dropped from over 1 million in 2015 when it peaked resulting in some of the reactionary measures that have seen volunteers threatened with jail for rescuing refugees from sinking boats.

Only 141,500 people attempted the dangerous crossing last year. And fewer than 23,000 refugees and migrants have made it across the sea to Europe so far this year.

The data also shows nearly 15,000 people are estimated to have died or gone missing in the perilous sea voyage since 2015, including more than 500 so far this year.

The Council of Europe, the continent’s leading rights organisation that includes EU states and others as members, said Europe had failed in its duty to save lives and prevent returning people to where they are at risk.

“(EU member states) have adopted laws, policies and practices which have often been contrary to their legal obligations to ensure effective search and rescue operations, the prompt and safe disembarkation and treatment of rescued people, and the prevention of torture, inhuman or degrading treatment,” the rights watchdog said in a report on Tuesday.

The report outlines 35 recommendations for the EU to “reframe their response according to human rights standards”, including by reversing the scaling back of its sea rescue operations and ending pressure on aid groups who do it.

“Not only do migrants continue to die at sea, but in some cases they are intercepted and brought to countries – like Libya – where they are often subjected to torture, rape, slavery, exploitation or indefinite and unlawful detention.”

“The urgency to act is evident. Since 2014 thousands of human beings have died in the Mediterranean Sea as they tried to reach a safe shore after fleeing war, persecution and poverty. Despite this, state search and rescue operations have been reduced; the European Union and individual European states continue to outsource border controls to third-countries with notorious human rights records; and the NGOs which filled the vacuum left by states’ disengagement in providing humanitarian assistance have been harassed with administrative and judicial proceedings,” warned Dunja Mijatović, Council of Europe Commissioner for Human Rights.

The Commissioner stressed that this situation is also the result of the long-standing inability of European states to share responsibility for search and rescue operations and the reception of refugees, asylum-seekers and migrants on land. “Undoubtedly, some coastal countries have been left alone in facing the challenges posed by the arrival of migrants at sea”, says the Commissioner. “However, this cannot justify measures that endanger the life and safety of human beings.”

The EU has become tougher on immigration since a 2015 spike in Mediterranean arrivals caught it by surprise, stretching social and security resources and feeding support for right-wing and eurosceptic forces across the bloc.

The EU has since tightened its external borders and asylum laws, as well as giving aid to non-EU states on the eastern and southern rim of the Mediterranean to help them contain migration to Europe.

The bloc’s 28 national leaders are set to restate their commitment to these policies in a new “Strategic Agenda for 2019-2024”, a document they are due to endorse at a summit in Brussels on Thursday and Friday.

Meanwhile the Italian government has introduced a new security decree that would mean non-governmental organisation (NGO) rescue boats that bring migrants to Italy without permission could face fines of up to €50,000.

On Friday night the Italian president, Sergio Mattarella, signed a bill on security and immigration drafted by Matteo Salvini, the far-right interior minister and leader of the Northern League party, which has been described by aid groups as a “declaration of war against the NGOs who are saving lives at sea”.

Italian Interior Minister Matteo Salvini threatened on Wednesday to use tough, new measures for the first time on a German charity ship, Sea Watch, after it picked up migrants off the coast of Libya without authorisation.

“This is the umpteenth time Sea Watch, which is a real pirate ship, has done something like this,” said Salvini, who also serves as deputy prime minister in the ruling coalition and is head of the far-right League party.

The Italian government on Tuesday approved a security decree that gives the Interior Ministry the power to deny access to Italian territorial waters to vessels that it considers are a risk to security or public order.

It did not specify that charity ships were the intended target, but Salvini has vowed to halt their operations and he jumped on news that the Sea Watch vessel had picked up 52 people from a rubber boat some 47 miles (75 km) from Libya.

Another practice that has raised alarm with rights advocates are repeated instances of EU states barring rescue boats from their ports, keeping them floating for days to avoid taking responsibility for the people on board.

The Council of Europe said its was the EU’s clear obligation under international humanitarian law to run effective sea rescue missions, guarantee entry for those picked up, and provide legal migration avenues to Europe.

Underlying the EU’s reluctance to welcome people fleeing wars and poverty are bitter divisions over how to handle them. The main EU states of arrival, including Greece and Italy, say they cannot cope themselves.

The wealthy destination countries like Germany and France also want the EU to share people out but the nationalist governments – including Poland and Hungary in the bloc’s east – refuse to host any of the new arrivals.

Triggered by the chaos of 2015, the divisive dispute has weakened the EU’s unity and created bad blood between member states that has spilled over to other policy areas from budgets to climate.

Twelve people were killed on Monday after a dinghy carrying migrants sank off Turkey’s western coast, the Turkish coast guard said, adding that 31 others had been rescued.

Search and rescue operations were launched by the coast guard to reach the passengers of the boat, which sunk off the coast of the Bodrum district in the Mugla province.

The coast guard said in a statement that the operations, carried out by two boats, a diving team and a helicopter, had found the bodies of 12 people from the sunken boat at around 32 metres deep in the sea.

The search and rescue operations are continuing.

MORE: Conservatives use refugees as political pawns ahead of crucial Brexit period