A man who threw a milkshake over Nigel Farage, the leader of Britain’s Brexit Party, has been ordered to pay him compensation to cover his suit-cleaning bill after pleading guilty to common assault and criminal damage. Paul Crowther, 32, threw the milkshake over Farage, one of the leading figures in the campaign for Britain to […] 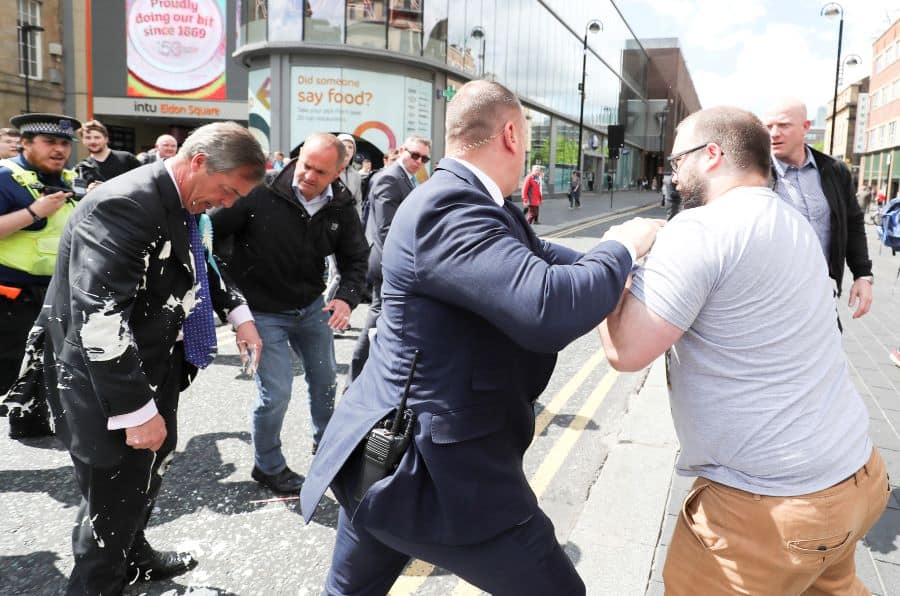 A man who threw a milkshake over Nigel Farage, the leader of Britain’s Brexit Party, has been ordered to pay him compensation to cover his suit-cleaning bill after pleading guilty to common assault and criminal damage.

Paul Crowther, 32, threw the milkshake over Farage, one of the leading figures in the campaign for Britain to leave the European Union, at an event in the northern English city of Newcastle before the European elections last month.

Crowther, who lost his job after the incident, was ordered to pay Farage £350 in compensation to cover the cost of damage to a lapel microphone and his suit cleaning. He was also ordered to do 150 hours of unpaid work.

Farage’s newly-formed pro-Brexit Party won the most support in Britain’s European elections last month with a promise to take the country out of the European Union without a deal.

Crowther, who was arrested after the incident, told journalists at the time the act was “a right of protest against people like him”.

Chris Atkinson, a lawyer for Crown Prosecution Service, said politicians should be free to conduct legitimate campaigns without fear of physical assault.

“While members of the public have the democratic right to engage in peaceful protest, it is wholly appropriate to bring charges in any case where such protests cross the line into criminal behaviour.”

Politicians in Britain have recently have been targeted by protesters who throw milkshakes.