What is going on? Nurses ‘banned from drinking water’ and train drivers using incontinence products

It comes as members of the Rail, Maritime and Transport union (RMT) at train companies and Network Rail will walk out on July 27. 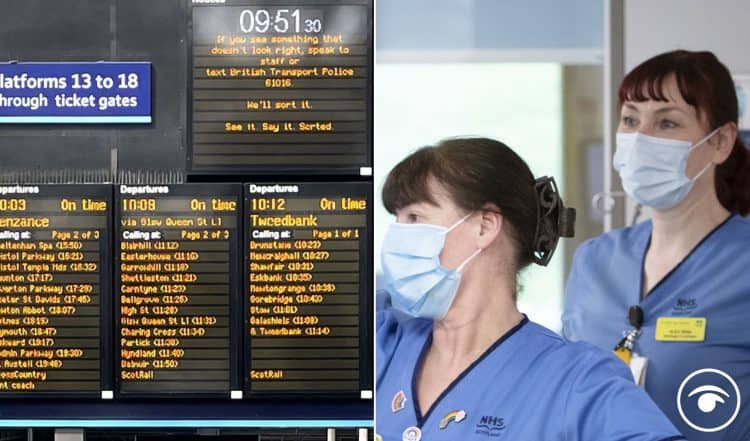 Nursing staff are reportedly still being banned from drinking water in clinical areas despite the UK facing a record-breaking heatwave.

A snap survey of 403 nursing staff by Nursing Notes found that 38 per cent were banned from drinking in clinical areas despite calls from NHS England’s Chief Nurse Ruth May to allow this.

It comes as the UK is set to swelter in soaring temperatures and “tropical” nights as the heatwave grips early next week, forecasters are warning.

The Met Office has extended its amber warning for extreme heat for much of England and Wales, so it is now in place from Sunday until the end of Tuesday, with the hot spell expected to peak on Monday or Tuesday.

It warns that it could cause health problems across the population, not just among people vulnerable to extreme heat, leading to potential serious illness or danger to life.

Widespread disruption, including road closures and cancellations and delays to rail and air travel are also possible, as temperatures look set to soar into the mid-30s or above.

If that wasn’t worrying enough Union bosses have accused the government and rail firms of exploiting the pandemic to force through changes to conditions, with one claiming that drivers were so short of breaks they had to rely on incontinence products.

The comments came from Mick Whelan, general secretary of Aslef, as he was giving evidence to MPs yesterday.

Mick Whelan, the general secretary of Aslef, told MPs there was a “resounding willingness among our members” to pursue industrial action, alleging that some drivers, confined to cabs for long periods without breaks, had been forced to use “Tena products” – an incontinence brand.

Rail workers are to stage a fresh strike in the bitter dispute over pay, jobs and conditions, threatening travel chaos at the height of the summer holidays.

Members of the Rail, Maritime and Transport union (RMT) at train companies and Network Rail will walk out for 24 hours on July 27.

Union leaders made the announcement after rejecting a new offer from Network Rail which they described as “paltry”.

The offer was for a 4% pay rise backdated to January, another 2% next year and a further 2% conditional on achieving “modernisation milestones”.