On Monday, Dhan sent an email to his family in Nepal and said ‘This will be my last email’. 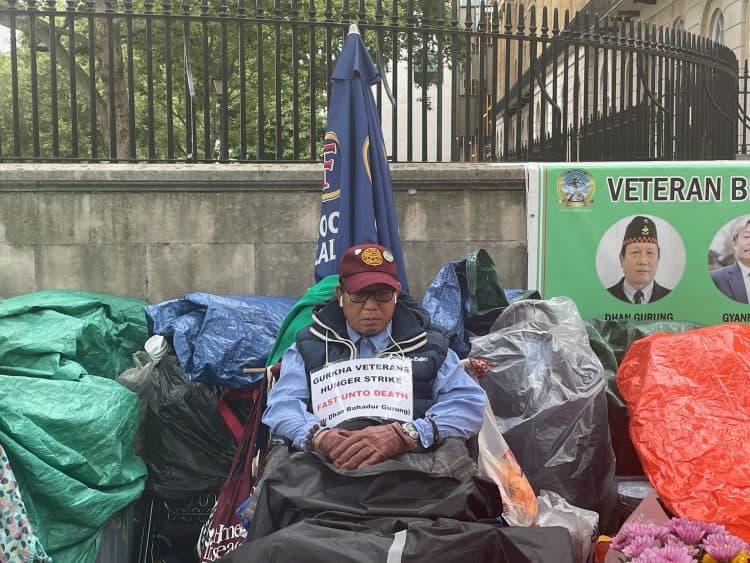 A Gurkha veteran who has been on a hunger strike outside Downing Street was taken to hospital with heart issues.

Dhan Gurung, who is part of a group of protesters and has not eaten for 11 days, was taken to hospital shortly after 1.30am on Wednesday and was later discharged.

The 60-year-old, from Basingstoke, has been protesting from his wheelchair in Whitehall near the gates to Downing Street, calling for equal pensions for Gurkhas who retired before 1997 and are not eligible for a full UK armed forces pension.

He previously told the PA news agency: “We will keep coming back here, we want to continue our hunger (strike) until death.

“We don’t care about sacrificing our life.”

Yam Gurung, 71, spokesperson for the Gurkhas, said he now has a blood pressure monitor and a heartbeat monitor to keep on top of his health.

He said the Support Our Gurkhas protesters are getting “weaker”.

He told PA: “On Monday, Dhan sent an email to his family in Nepal and said ‘This will be my last email’.

“I was so worried about him I stayed with him all day. Then the next morning he said he was OK and so I went home.

“The next thing I hear is he had been rushed to hospital.

“I was so frightened. He was taken to hospital because his heart is so weak and he is taking medicine but is not eating anything, he’s just having water. He’s getting weaker and weaker.

“He didn’t want to go to hospital – he said ‘I will die here’. But we convinced him to go. He told me quietly that his heart can stop any time, so we have got monitors and a medic keeping an eye on his health.”

He added: “It wasn’t a heart attack, he just has minor problems with his heart. They’re (all the Gurkhas) are getting weaker.

“The Government must listen.

“We don’t want anybody to die here. Not a single one. We are human beings. I want to ask Boris Johnson, what is your interpretation of human rights? Tell the world. Tell the Gurkhas.”

Mr Johnson was seen leaving Downing Street and heading to Parliament at around 9.20am on Wednesday.

The Gurkha protesters, along with other protesters campaigning on separate issues, began shouting at Mr Johnson as he drove past.

Hundreds of Gurkhas will be gathering outside Downing Street later and will march to Parliament Square to continue their protest.

Around 200,000 Gurkhas fought in both world wars, also serving in places such as Hong Kong, Malaysia, Borneo, Cyprus, the Falklands, Kosovo, Iraq and Afghanistan.

The change was brought in after a change in immigration rules in 2007, backdated to July 1997, meant that more retired Gurkhas were likely to settle in the UK on discharge, whereas the previous pension scheme had lower rates as it had assumed they would return to Nepal where the cost of living was significantly lower.

Related: ‘If I die another will come:’ Gurkhas say more will join hunger strike over pension disparity