“The fish rots from the head. You’ve got the Prime Minister, who is a serial liar," added guest Kevin Maguire 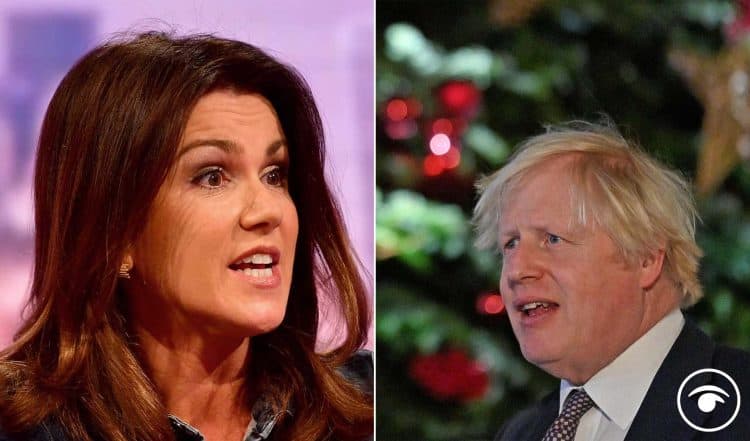 Boris Johnson is facing calls to “come clean” about an alleged Christmas party at No 10 during lockdown restrictions last year as the Government refused to send a minister to defend its position on television.

Sajid Javid was supposed to do the media rounds, but he was nowhere to be seen.

On the day the government was supposed to be celebrating a year since the first person in the UK received the Covid vaccination, they were instead fighting fires over festive celebrations in Downing Street.

Leaked footage from No 10’s £2.6 million press briefing room emerged on Monday night which showed former press secretary Allegra Stratton laughing as she appeared to rehearse answers to questions over the lockdown-busting party.

Labour’s shadow foreign secretary David Lammy called on the prime minister to tell the truth to the British public.

It was left to media commentators to reflect on the revelations. On GMB’s Susanna Reid was really not happy with the Conservative Party this morning.

On Good Morning Britain, Susanna Reid slammed Tory MPs and No 10 staff for “gaslighting” over their Downing Street Christmas party by “muddying the waters”.

“This feels like gaslighting where we know something happened, but we are constantly having the waters muddied. The spokesperson there says a year ago, what’s the right answer? Well, the right answer is that you say what happened!”

“600 people died on the night that Downing Street had the party,” guest Kevin Maguire pointed out. “It’s reached the point when Ant and Dec routinely joke about it on I’m A Celeb.”

Furious Reid went on: “If you were holding a funeral, you were only allowed up to 30 people. They had 20 people more than could go to a funeral.”

“A little lie becomes a huge lie,” Kevin then added. “The fish rots from the head. You’ve got the Prime Minister, who is a serial liar.”

However, former Health Secretary Matt Hancock told the show: “What I know is that the Prime Minister said that no rules were broken. And nobody’s suggesting that he was at this party.”