"No 10 has spent the past week denying any rules were broken. This new evidence calls that into question," Paul Brand said. 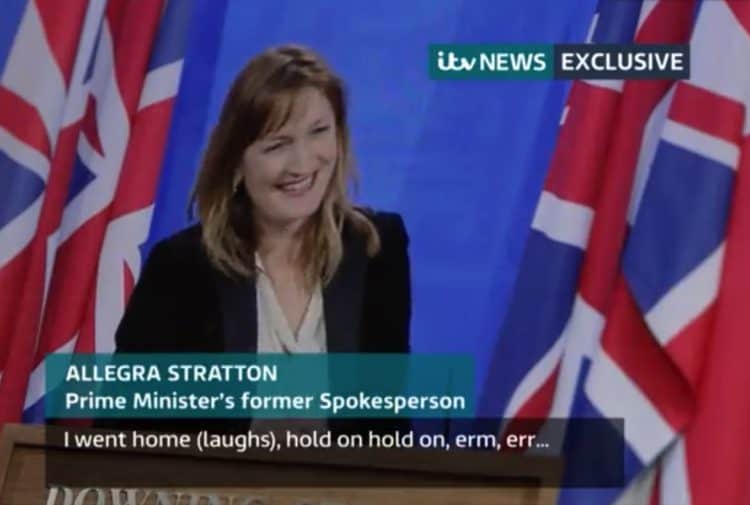 Senior aides to Boris Johnson joked about a Downing Street Christmas party just days after staff are alleged to have held a festive gathering in breach of lockdown rules.

The Prime Minister’s then press secretary Allegra Stratton and adviser Ed Oldfield, along with other aides, were filmed joking about a “fictional” party in December 2020.

But Labour leader Sir Keir Starmer called on Mr Johnson to “come clean and apologise”, adding that for aides “to lie and to laugh about those lies is shameful”.

The footage obtained by ITV News showed Ms Stratton answering questions at a mock press conference on December 22 about a Downing Street Christmas party the previous Friday – the date of the alleged rule-breaking gathering.

Earlier, Mr Johnson declined to repeat the claim from Downing Street that staff did not hold a Christmas party in No 10 during Covid restrictions.

The Prime Minister instead insisted no rules were broken as the Times reported that staff wore festive jumpers and were asked to bring “secret Santa” gifts.

They were reported to have brought alcohol and food to the event said to have been attended by dozens of colleagues on December 18 last year when London was in Tier 3 restrictions banning social mixing indoors.

Mr Johnson’s official spokesman has insisted “there was not a party” but the Prime Minister declined to characterise the event during a visit to a prison in London on Tuesday.

“What I can tell you is that all the guidelines were observed, continue to be observed,” he told reporters.

“Our position has not changed”

Asked if he investigated personally, Mr Johnson said: “I am satisfied myself that the guidelines were followed at all times.”

Ministers are yet to explain how the alleged bash complied with the rules in place at the time, despite coming under pressure since an initial report in the Daily Mirror.

The newspaper said two events took place in No 10 in the run-up to the festive season last year, including Mr Johnson giving a speech at a leaving do during November’s lockdown.

At the time, the Tier 3 rules explicitly banned work Christmas lunches and parties where it is “a primarily social activity and is not otherwise permitted”.

Labour leader Sir Keir Starmer said: “People across the country followed the rules even when that meant being separated from their families, locked down and – tragically for many – unable to say goodbye to their loved ones.

“They had a right to expect that the Government was doing the same. To lie and to laugh about those lies is shameful.

“The Prime Minister now needs to come clean and apologise. It cannot be one rule for the Conservatives and another for everyone else.”