"Yet again this government does not have a plan.. it's just words, messages & sound bite," blasted GMB's Adil Ray. 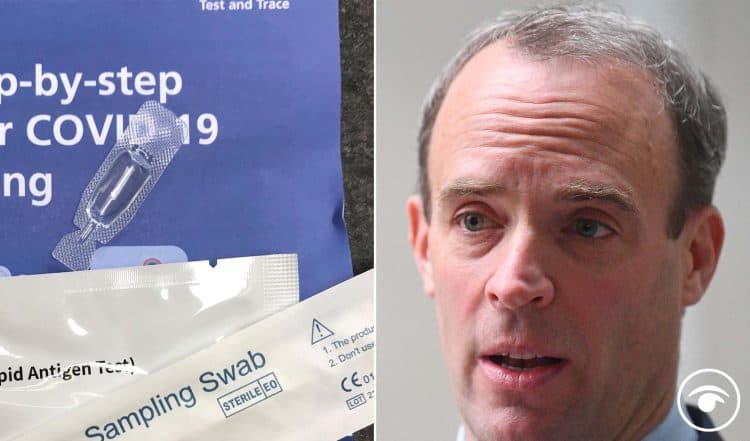 Issues surrounding the delivery of rapid Covid-19 tests have run into a second day as new guidance came into force for the testing of coronavirus close contacts.

Mr Raab appeared rattled when he issued a correction to the statistics for England after twice giving the wrong number during a series of broadcast interviews on Tuesday morning.

His first figure to Sky News of 250 was alarming because that was up by 240 on the figure announced a day earlier by the UK Health Security Agency.

After initially describing the number of people in hospital with Omicron as being “significant”, Mr Raab was pressed over the scale.

“Last I saw it was in the low hundreds, 250 the last time I looked, but of course the data is being updated all the time,” he told Sky.

Minutes later, he told BBC Breakfast: “I know we’ve had one death. I think we’ve got nine people who are in hospital with it.”

Mr Raab went on to say it was “10 at the moment” when he was quizzed over the confusion during an appearance on ITV’s Good Morning Britain.

“First of all, I misheard one of the questions around whether it was hospitalisations of Omicron-related patients or more generally, but the figures are: 1 death from Omicron, 10 in hospital, and I can tell you the latest daily hospitalisations (for all Covid strains) run at 900.”

The confusion came as dozens of Tory MPs plan to rebel on the Government’s new coronavirus restrictions, in what is predicted to be the largest Commons rebellion against Boris Johnson since he entered No 10.

For the second day running, lateral flow tests are unavailable to be ordered via the Government website, though it is understood that a number were available in the early hours of the morning.

A message on the site on Tuesday morning said there were no tests available for home delivery, although tests can still be collected from pharmacies.

On Monday, the UK Health Security Agency (UKHSA) said that “due to exceptionally high demand, ordering lateral flow tests on gov.uk has been temporarily suspended to fulfil existing orders”.

Ministers have insisted there is no issue over supply, but rather there are constraints on the delivery system for the tests, as they encouraged people to pick up testing kits from their local pharmacies.

However, many people have reported that their local pharmacy is out of stock.

Here he is on Kay Burley…