"Where was this Miliband when he was labour leader ffs..." said one person after watching Ed in action. 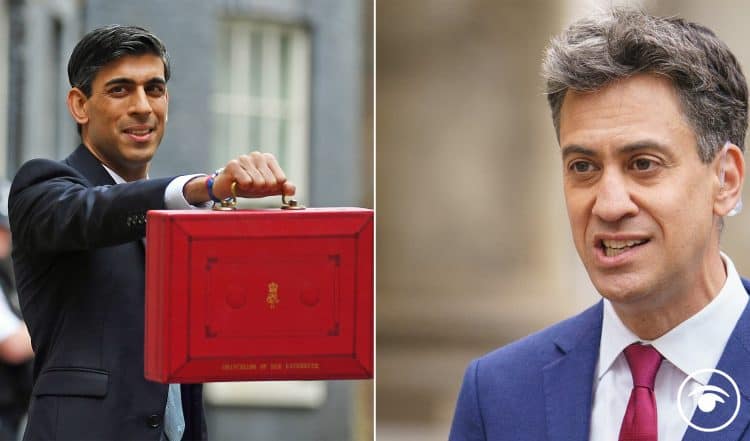 Conservative MPs have been accused of siding with “profiteering oil and gas companies” as they voted down calls for a windfall tax to help ease cost-of-living concerns.

It left Ed Miliband to give Chancellor Rishi Sunak a severe dressing down in the Commons yesterday.

Labour tabled a Queen’s Speech amendment asking for a new tax on the profits of oil and gas producers to provide “much-needed relief” from soaring energy prices for households.

Even Richard Madeley chipped in on GMB to slam the government.

She replied: “We want a low tax economy.”

To which co-presenter Susanna Reid interjected and said: “you want to be a low tax economy, but we currently have the highest tax burden on individuals.. not sure how that’s helping people right now.”

Miliband was unrelating in Parliament as he tore into Sunak over the government’s rejection of a plan to introduce a windfall tax to try and help households through the cost of living crisis.

Speaking in the Commons, hw said Sunak’s position was “wrong, unfair, unjust and out of touch” and said he is quick to blame others for societal problems.

“The government’s position on the windfall tax is part of a wider problem with this chancellor and this government. Just look at the political choices he is making: he leaves non-doms shielding their millions while millions of families and pensioners face a cut in their incomes; he whacks up taxes on tenants and lets landlords off the hook; and he makes young people at work pay more, but those getting money from capital gains pay not a penny extra. Wrong, unfair, unjust, out of touch—that is who he is.

“Of course, being this Government, they always try to blame someone else, as we heard earlier. It is hard to keep track, but this is the roll call of people who the Conservative party have tried to frame in just the past few days: the Bank of England; civil servants working from home; and, shamefully, the British people for being unable to cook properly. That, apparently, is the cause of food banks.

“Yesterday, there was also the ludicrous suggestion from a minister that people were not working enough hours. The chancellor, of all people, is also at it. Who does he blame for the massive cut to benefits? He blames the IT system—the dude from Silicon Valley. Who is he trying to kid? If he had got his act together early enough, of course he could have raised benefits properly.”

That wasn’t the end from Ed, as he continued to slam Sunak saying: “The story of the past few months is this: crypto has crashed, and so has the Chancellor—and how similar they are. The Chancellor and cryptocurrency came out of nowhere. The value surged, and it looked like the future, but it has all turned out to be one giant Ponzi scheme.

Well, people were blown away by Miliband’s stern words: