★★★★☆ 2017’s Japanese zombie comedy, One Cut of the Dead, became a word-of-mouth sensation on the festival circuit. Boasting a clever film-within-a-film setup, it revealed itself to be anything but the same old zombie apocalypse yarn, more a charming celebration of guerrilla filmmaking, artistic creativity, thinking on your feet and the little miracles that happen […] 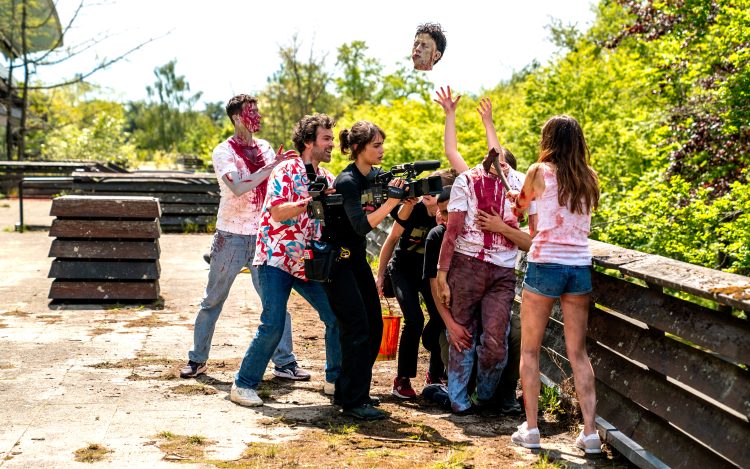 2017’s Japanese zombie comedy, One Cut of the Dead, became a word-of-mouth sensation on the festival circuit. Boasting a clever film-within-a-film setup, it revealed itself to be anything but the same old zombie apocalypse yarn, more a charming celebration of guerrilla filmmaking, artistic creativity, thinking on your feet and the little miracles that happen on a beleaguered film set. Fast forward to 2022, and Michel Hazanavicius’ wonderful French remake has opened the 75th Cannes Film Festival.

The Oscar-winning filmmaker earned his stripes making spy genre parodies starring Jean Dujardin. The Artist (2012), too, was a pastiche of silent era Hollywood, again starring Dujardin, who went on to win a Best Actor Oscar in 2012. Hazanavicius loves to play around with conventions, he deconstructs generic tropes and staples, mines them for visual gags and metatextual amusement. He is the perfect director to remake One Cut of the Dead.

Originally titled Z, in France the letter boasted a pun-style reference to low grade trash cinema, but since the invasion of Ukraine, the Z symbol has taken on unfortunate connotations related to Russian fascists. Hazanavicius, sensitive to this, decided to alter the title to Coupez! (Cut!) and in English-language territories will do the rounds as Final Cut.

Director Rémi (Romain Duris) and his small indie crew are under immense pressure. They’ve got to make a zombie movie and make it fast. In order to deliver some oomph into his failing picture, to achieve his ideal realism, Rémi, a parodic take on the martinet film boss, prior to the shoot, travelled to a remote Japanese village and used an old curse to raise the dead, much to the surprise of his actors and cameraman.

The first half hour is a chaotic hoot featuring bizarre acting, terrible dialogue, shoddy camerawork, plotting so nonsensical it verges on avant-garde, and indecisive music cues. It comes across as a movie that would give schlock legend Ed Wood nightmares. Once the curtain is pulled back and we see behind the scenes, Final Cut becomes all the funnier and endearing, a gesture of sincerity in a cynical world, striking an egalitarian note in dark times, as we come to fully appreciate and understand the haphazard moviemaking tribulations endured by Rémi and his plucky gang.

Like all the quality remakes Final Cut brings its own vision and embellishments and twists to the story, this new one can sit side by side with One Cut of the Dead without stinking up the place like a rotting corpse. Thanks to a game cast, Hazanavicius’s impeccable comic timing and a revelling in the absurd producing plenty of laughs, Final Cut is a love letter not just to movies, but those crazy enough to make them.