The former MP sat in front of a life-size cardboard cut out of Boris Johnson as she made her energy saving comments. 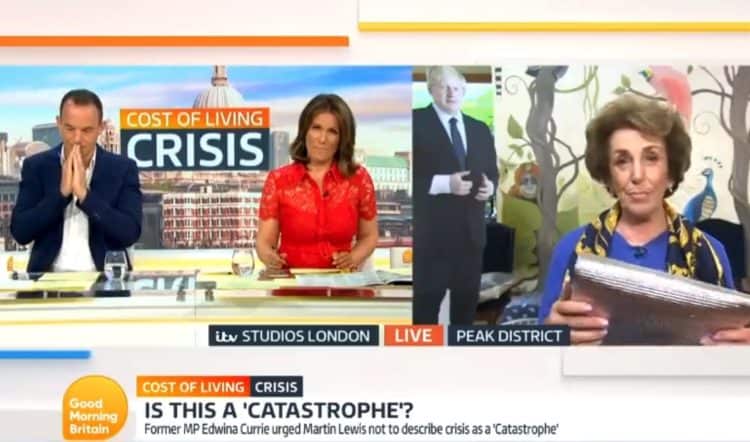 Last week Martin lewis and Edwina Currie clashed after she said he should stop using the word ‘catastrophe’ to explain the cost of living crisis.

Now on Good Morning Britain, this morning viewers were surprised to see former MP Edwina Currie on the show talking about the energy crisis, with a life-size cardboard cut-out of Boris Johnson behind her.

Edwina said: “Here is a tip, something that is dirt cheap.

“Martin knows about this sort of thing, if you put some of this behind your radiators, it really works, it makes the whole room nice and warm,” holding up some foil-lined insulating.

She continued: “And it means you can turn down your thermostat without it causing you any more discomfort.

“Martin, Susanna most people my age have lived in houses without central heating but we are dependent on it now.

Martin Lewis was then seen with his head in his hands.

The car crash interview was met with a mixture of astonishment, laughter and anger online: