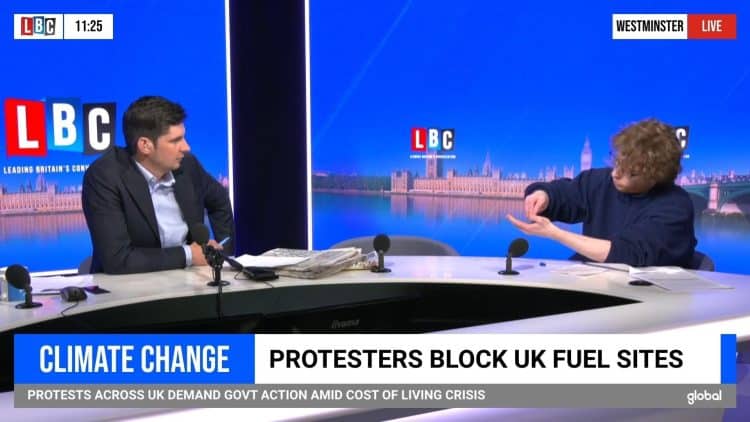 The jokes write themselves here: A ‘Just Stop Oil’ protester has gone viral on Sunday, after he dramatically glued himself to a studio microphone during an interview on the radio station LBC.

Nathan McGovern, a student and anti-oil activist, made his mark during Tom Swarbrick’s show. The seasoned broadcaster was left flummoxed, after the protester covered his hands in the sticky stuff and grabbed hold of the studio equipment.

The bizarre act of defiance forced Swarbrick to move to a different location, taking his show off air for several minutes. The pair had been discussing climate change and the planned interventions of Just Stop Oil, before the glue-stick made an appearance.

Here is the moment that a just stop oil protestor glues himself to the microphone on LBC pic.twitter.com/pus7ES4hXN

Who are Just Stop Oil?

Just Stop Oil are relative newcomers to the protest scene, but they’ve made a major impact already. The group ensured they’d be part of the national conversation, after several activists tied themselves to goalposts during Premier League games last month.

McGovern, while he still has the spotlight on him, issued this statement earlier on Sunday. The 22-year-old has slammed various media outlets for ‘failing to hold the government to account’ on the climate emergency – and explained the significance of his microphone stunt.

“I’m terrified, angry, and sad. Our government is in bed with the fossil fuel industry and leaving millions in the UK to choose between heating and eating. All this whilst fuelling famine and drought across the global South.”

“The media has a duty and obligation to hold the government to account and sound the alarm on the emergency we are in but refuses to do so. If they won’t use their microphone to fight for ordinary people, ordinary people like me will.”