Protesters were glued on to roads, suspended on bamboo tripods, and locked on to oil drums and each other from around 4am. 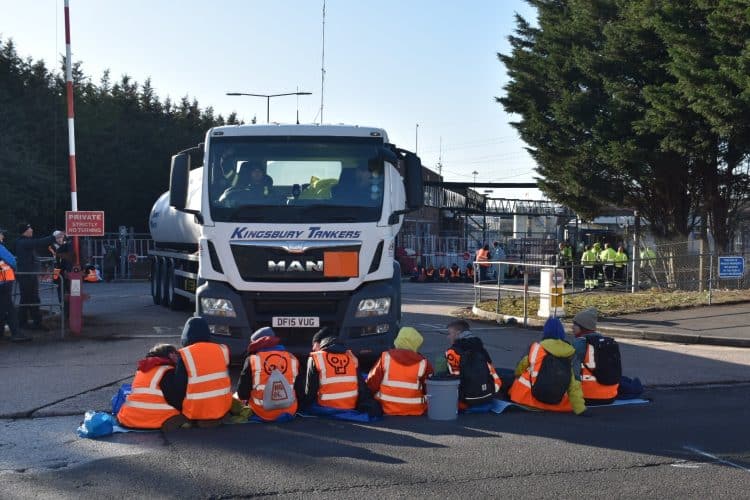 Activists from Just Stop Oil during one of their blockades at the Esso depot in Wood Lane, Birmingham early on Friday. Credit:PA

Climate change protesters say they are continuing to block oil terminals after at least 34 arrests across the country.

Activists from Just Stop Oil said they have blocked access to the Titan Truck Park and revealed a secret underground network of tunnels at the Navigator and Grays oil terminals in Essex.

The protesters are demanding that the UK Government stops new oil and gas projects.

They said Saturday morning’s tunnel activity at Grays and Navigator means the main and emergency access roads to the critical oil terminals are closed.

It comes after activists from Just Stop Oil and Extinction Rebellion obstructed 10 fuel sites in the Midlands and southern England in the early hours of Friday, to stand against “expanding UK oil and gas production”.

Protesters were glued on to roads, suspended on bamboo tripods, and locked on to oil drums and each other from around 4am.

ExxonMobil UK, one of the country’s largest privately-owned underground oil pipeline distribution networks, said it shut down three of its terminals as a result, and police from at least five forces were deployed to tackle the demonstrations.

The Met arrested 14 activists who broke into a facility at Bedfont Road in Staines, Surrey, while Essex Police detained 13 demonstrators at various sites, and West Midlands Police arrested six people at a terminal in Tyburn, Birmingham.

Police said arrests were made for offences including aggravated trespass, criminal damage and obstructing the highway.