Watch: Gove says PM has nothing to apologise for following ‘appalling’ Savile comments

It comes after Dominic Raab described the comments as part of the "cut and thrust" of parliamentary proceedings. 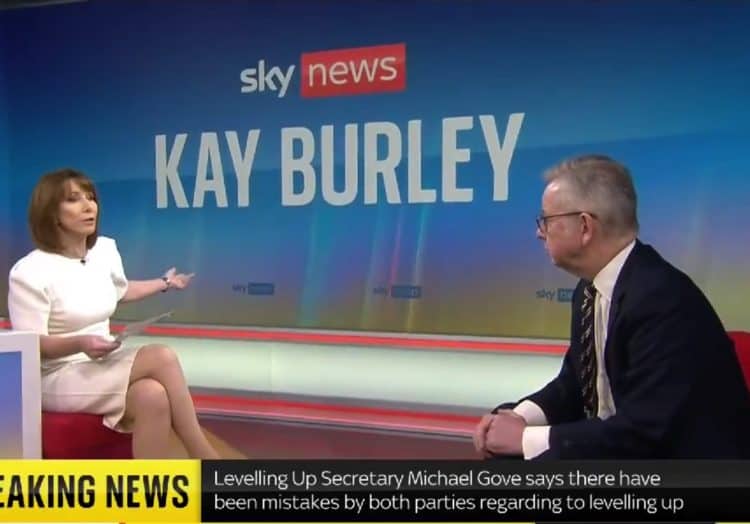 Michael Gove has defended the prime minister’s Jimmy Savile comments after they were slammed as “appalling” by a lawyer for the victims of his horrendous crimes.

The levelling-up secretary, who was doing the media rounds in the hope of promoting the government’s new plans to close the gap between rich and poor parts of the country, was caught up in controversy following remarks made by his boss on Monday.

The claim is one that has been widely shared on rightwing groups, but has been debunked by Full Fact and the BBC’s Reality Check.

Appearing to defend the prime minister this morning, Gove said: “I think this is a uniquely sensitive issue and it does need to be handled with care, and I listen with enormous respect to those who act for victims of the actions of a terrible, terrible criminal.

“But – and it’s not a subject that I want to dwell on because it is uniquely sensitive – it is the case that the CPS apologised for the handling of this case and what happened in 2009, and I think we should acknowledge that an apology was given at the time and respect that.”

Mr Gove added: “Keir Starmer acknowledged that mistakes had been made by the organisation of which he was head, to his credit. He was very clear about those mistakes.”

Earlier this week Dominic Raab said that Johnson’s discredited claim that Sir Keir Starmer failed to prosecute Jimmy Savile was part of the “cut and thrust” of parliamentary proceedings.

However, the deputy prime minister refused to repeat the allegation levelled at the Labour leader by Mr Johnson when questioned on BBC radio.

Mr Raab told BBC Radio 4’s Today: “This is the cut and thrust of Parliamentary debate and exchanges.”

He said he could not substantiate the claim, adding: “I’m certainly not repeating it, I don’t have the facts.”

Richard Scorer, head of abuse and public inquiries at law firm Slater and Gordon, said his clients were “appalled and disgusted.”

Speaking to the Mirror, Mr Scorer said: ”[The victims] are universally appalled and disgusted by those remarks and want him to apologise.

“They also feel he should withdraw those remarks.”

Starmer said it was a “ridiculous slur peddled by right-wing trolls”.

Meanwhile, Lindsay Hoyle has also criticised the PM’s remarks, saying he was “far from satisfied” with what he said.