It comes after Sue Gray published a "flimsy" 12-page update on the partygate scandal that has rocked the government. 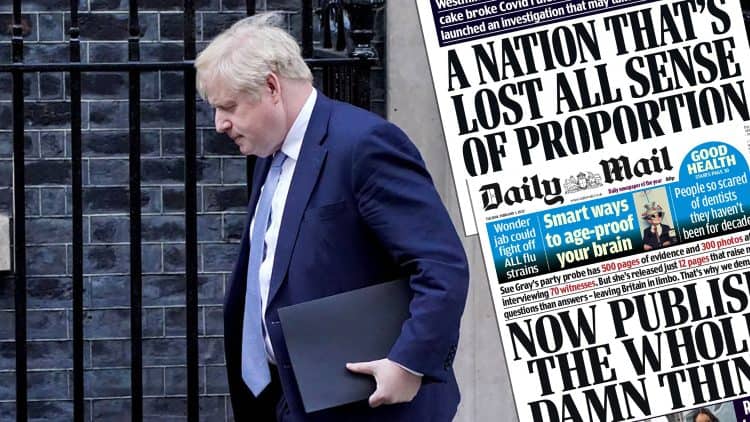 The Daily Mail has called on the government to publish the “whole damn” report after Sue Gray was only able to reveal an “update” to her investigation so as not to impact a police inquiry.

The right-wing rag, which only last week claimed the UK has “lost all sense of proportion” by focusing on the scandal emerging from government lockdown parties allegations, said Gray’s “flimsy” 12-page update would not be enough to quell the public’s clamour for the full version.

Ms Gray revealed in an “update” that of the 16 alleged gatherings she had deemed necessary to investigate, at least 12 linked to government properties in Downing Street and Whitehall were being investigated by the police.

Three alleged gatherings not previously reported were also included in the report.

Fresh claims over No 10 lockdown parties

Johnson today came under renewed pressure over lockdown parties in Downing Street amid reports he attended more gatherings under investigation by the police.

The Daily Telegraph reported that he was seen heading up to his flat on the night of a gathering there which the Met is investigating.

The prime minister is also said to have spoken at two more leaving dos which are the subject of Scotland Yard inquiries.

The reports are likely to fuel claims by opposition parties that Mr Johnson was well aware of the so-called “party culture” in Downing Street and parts of Whitehall at that time.

The gathering in the Downing Street flat took place on November 13th 2020 – the night Mr Johnson’s chief adviser, Dominic Cummings, left No 10 amid the acrimonious fall-out of an internal power struggle.

On Monday, the Prime Minister repeatedly refused to say if he was there.

However in an online question and answer session, Mr Cummings said it was clear there was a party going on and he accused Mr Johnson of lying.

“If cops talk to people there that night, there’ll be witnesses who say ‘we could all hear a party with Abba playing’.”

The Telegraph also said a gathering on December 17 2020 for an official who was leaving was for Captain Steve Higham, then one of Mr Johnson’s private secretaries, who advised on defence and national security issues.

The Prime Minister was reported to have attended the event and to have given a speech.

He was also reported by both the Telegraph and the Guardian to have been present at a leaving do for two No 10 private secretaries on January 14 2021.