But Dominic Raab claimed the comments were just the "cut and thrust of parliamentary debates". 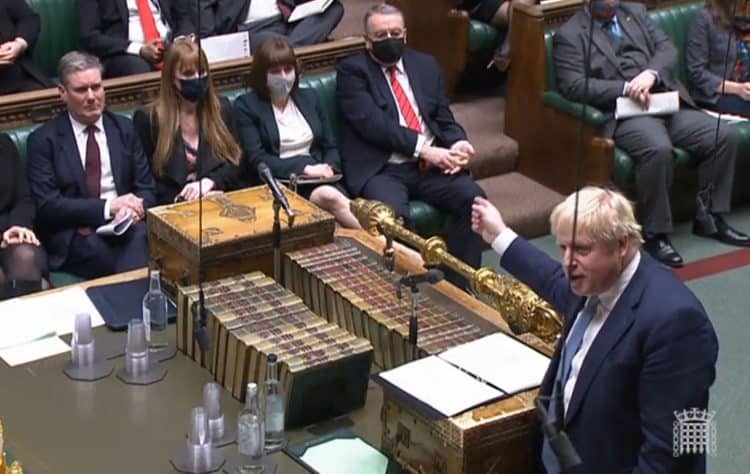 Sir Keir Starmer has accused Boris Johnson of peddling a “ridiculous slur by right-wing trolls”, after the prime minister levelled false allegations about the Labour leader’s involvement in the prosecution of Jimmy Savile.

In a heated exchange over the Sue Gray report in the House of Commons on Monday, Johnson used parliamentary privilege to point the finger at Starmer for decisions made when he was the director of public prosecutions in 2009.

The prime minister claimed Starmer “used his time prosecuting journalists and failing to prosecute Jimmy Savile, as far as I can see”.

Hitting back at Johnson on Tuesday morning, Sir Keir accused Johnson of using “ridiculous slur peddled by right-wing trolls” and said the prime minister had “debased himself”.

Claiming he could see the “disgust” in the faces of Tory MPs when Johnson invoked Savile, Starmer told Sky News: “They knew he was sinking so low with that slur. It’s obviously not true. But he does it because he doesn’t understand honesty and integrity.”

He added: “Many of them expressed that to me, disgust at their prime minister for debasing himself in the House of Commons instead of acting with the contrition and the integrity that he should have shown yesterday.

“He does what he always does, which is to try to drag everybody into the gutter with him. One thing we know about this prime minister is everybody who has ever come into contact with him always gets damaged in the process.”

“The smear made against Keir Starmer relating to Jimmy Savile yesterday is wrong and cannot be defended,” he tweeted.

“It should be withdrawn. False and baseless personal slurs are dangerous, corrode trust and can’t just be accepted as part of the cut and thrust of parliamentary debate.”

Smith’s intervention came after two cabinet ministers defended Johnson’s use of the slur – but one admitted they could not substantiate it.

Dominic Raab, the deputy prime minister, claimed that the comments were part of the “cut and thrust of parliamentary debates and exchanges” – but was unwilling to repeat the allegation.

Meanwhile Nadine Dorries, the culture secretary, told Channel 4 News on Monday night: “I have no idea of the background of Keir Starmer … The prime minister tells the truth.”

And a Downing Street spokesperson said on Tuesday that Johnson “stands by” his false claim about Starmer.