“In a post-Covid world where people will want to get on their bikes more. It’s madness. It’s a disgrace.” 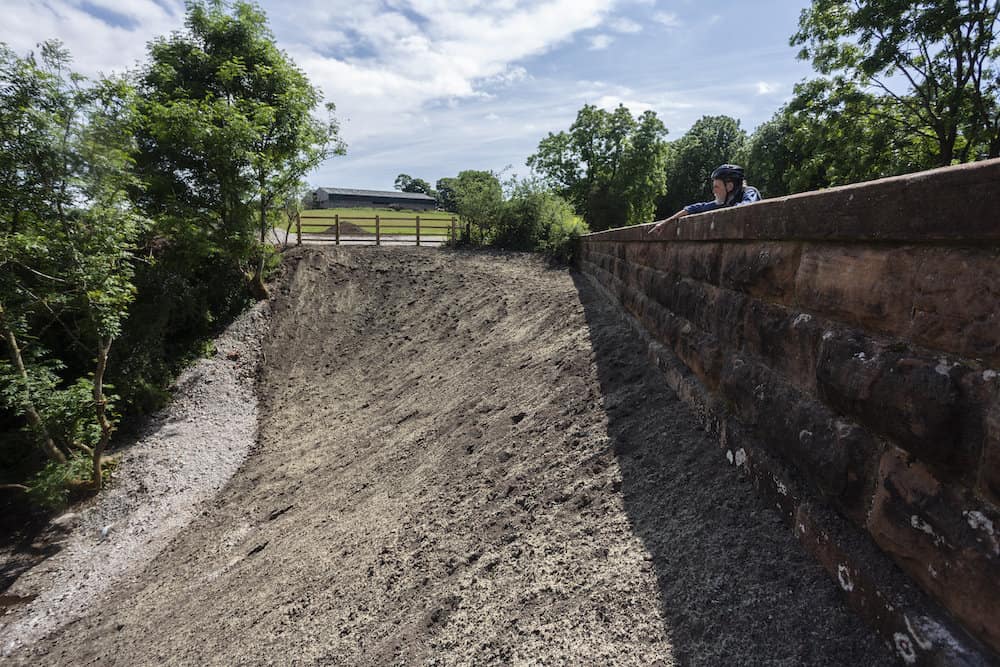 159 year old Great Musgrave bridge, Cumbria which has been infilled with stone by Highways England Credit;SWNS

A heritage group has accused Highways England of ‘vandalism’ by filling-in historic railway bridge arches with concrete and stopping them being used by walkers and cyclists.

The group is an alliance of campaigners, civil engineers and greenway developers who see the Historical Railways Estate as valuable for future transport.

HRE spokesman Graeme Bickerdike, 55, has branded the project as a ‘scandalous wrecking ball’ as he claims it would effectively destroy any chances of turning them into greenways.

The Eden Valley railway and Stainmore railways, which run north and south of the 159-year-old bridge, have a long hoped to unite their tracks to attract tourists.

Highways England said infilling was needed to “prevent further deterioration of the bridge from occurring and remove the associated risk of structural collapse and harm to the public”.

But documents obtained by the two railways reveal inspectors had no concerns about the bridge’s condition.

They added that £5,000 worth of work would have increased its capacity to 40 tonnes and made it safe for any vehicle to pass over – while infilling cost a whopping £124k.

The bridge is one of 134 sites due to be demolished or infilled around the country.

Graeme, from Wakefield, West Yorks., said: “Without any engineering or public safety or cost justification, Highways England is seeking to put beyond future use built and existing infrastructure.

“Infrastructure which has the potential to fulfil a future role when we move into a more sustainable lifestyle in terms of transport.

“There is an immense amount of anger and frustration that a government owned company which has a duty to fulfil government policy, which is to encourage sustainable transport.

“Is actively and destructively working against that agenda without justification.

“It’s just vandalism. They are almost lawless, there is no scrutiny of what they are doing.

“The impact of that will be felt by community groups up and down the country who are trying to build a better future.

“But their ability to do that is going to be compromised by people in Highways England who are simply managing spreadsheet.”

The UK’s developing network of foot and cycle routes has brought new life to many old railways over the past 50 years.

This comes as the government has pledged £2 billion over five years to deliver new infrastructure to promote these changes.

But the campaigners claim Highways England, who have been entrusted to manage 3,200 disuses railways structures, plan to destroy hundreds of them – compromising future greenway schemes.

Graeme added: “We need to do more of that to encourage people onto foot and bike. But we can only do that if there are safe and high-quality opportunities.

“We are recognising what Scotland recognised many years ago, that we need to reopen railways that were closed in the 50s to offer opportunities beyond their cars.

“If you infill these bridges, you can scupper these schemes. If you don’t, designers would have to engineer routes up onto a road because these railways have been filled in.

“From every possible perspective this is detrimental.”

The Queensbury Tunnel in Bradford, West Yorks., is another structure which was due to be infilled as part of Highway England’s strategy.

The 1.4-mile tunnel built in 1870 has been part of a mounting campaign to transform it into one of Europe’s longest underground cycles to connect Bradford and Halifax.

But those plans were scuppered by Highways England, who began work on burying the disused tunnel at a projected cost of £545,000 according to the campaigners.

Preparatory work, which is done to ensure it is safe for the infilling process to begin, was due to last four months – but the project has hit its 1,000th day and seen costs soar to more than £7.5m according to the HRE Group.

Highways England contests the figures, and claims that so far £5m has been spent.

Graeme added: “There is nothing justifiable about this.

“The tunnel connects two of the biggest cities in West Yorkshire.

“Highways England are completely oblivious to the impact of their actions on good people trying to do positive things and build a better future.

“They simply do not care.”

Paul Whitewick, 43, who runs a YouTube channel which looks at abandoned railways and structures, branded Highways England as a ‘disgrace’.

He said: “We go around the country looking at UK heritage and its impact and importance to its communities.

“If we keep infilling structures, there won’t be options for people to turn them into greenways.

“In a post-Covid world where people will want to get on their bikes more, to infill structures which brings no value.

In a letter sent on 23 April 2020, Highways England told Eden District Council that an “assessment undertaken in 1998 found the structure suitable only for 17 tonnes” and action was needed to “remove the associated risk of structural collapse and harm to the public”.