These are the most exciting new London restaurant openings taking place throughout July. 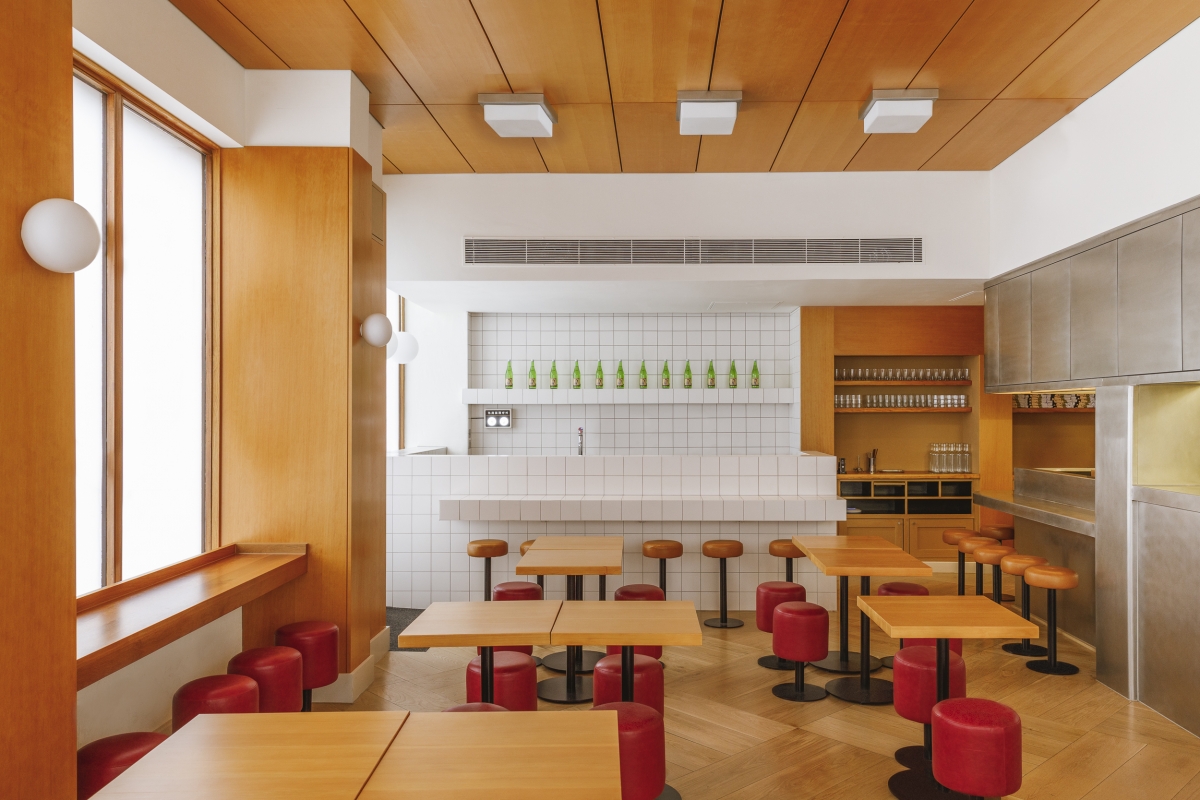 As hospitality businesses continue to re-open, a clutch of brand new restaurants, bars, and pop-ups have also planned to open in London. We pick the most exciting new openings taking place throughout July.

Just off Shoreditch High Street, the team behind BAO will open the first BAO Noodle Shop this month. Taking cues from the beef noodle shops of Taiwan, BAO Noodle Shop will serve fresh wheat noodles made on-site with specialty flour imported from Taiwan. Beef noodle soup will be the main draw, with two versions available. The first, a classic Taipei-style broth will feature slow braised beef cheek and beef short rib, spiced beef butter, and fermented greens. Secondly, BAO’s take on a Tainan-style broth will be much lighter, with imported 400 day-aged white soy and thin slices of rare poached rump cap. Both broths will be made with aged beef bones, fermented chilli bean paste and assorted spices, and guests will have the option of adding cured egg; crispy egg; or spiced beef butter.

BAO Noodle Shop is set to open on 6th July and can be found at 1 Redchurch Street, London E2 7DJ.

The newest restaurant from Big Mamma, the team behind Gloria and Circolo Popolare, Ave Mario promises to be a ‘traditional osteria in feel’. Set across 7,000 square-feet, the 295 seat restaurant will be split into different spaces, with two terraces, a vast dining room, and a ‘70s inspired mirrored basement where counter dining will be available, for the first time from the group. As for the menu, the food is “inspired by the perfect day in Firenze”, set to include the likes of carbonara ravioli filled with pecorino cream, egg yolk, and crispy guanciale; a gigantic cotoletta Milanese using high welfare rose veal; and a 60cm tall Stracciatella ice cream cake marbled with chocolate spread. Pizzas, on the other hand, will be baked using the traditional Italian ‘Biga’ technique, resulting in pillowy dough.

Ave Mario is set to open on Friday 2nd July and can be found at 15 Henrietta Street, London, WC2E 8QG.

From the team behind Lyon’s Seafood & Wine, Hackney Coterie is a new warehouse brasserie and wine bar. For the new restaurant launch, restaurateur Anthony Lyon, has collaborated with sommelier and Kikisake-Shi Master of Sake, Kelvin McCabe, to deliver a ‘multifaceted dining experience’. With an all-day dining space, the restaurant and wine bar will also feature a wine shop and deli. In the kitchen, head chef Dominic Auger, formerly of HIDE, will serve a seasonally-driven with minimal waste in mind. Changing weekly, the launch menu will offer dishes such as salmon tartare with jasmine pickled cucumber, aged soy, and peanut; pig head croquettes with baby shrimp, rhubarb sriracha, and onion seeds; and kombucha-glazed pumpkin with Blackwoods Graceburn, freekeh, spiced sultanas, and pine nuts. Brunch will also be served on weekends.

As for the wine, lesser known producers will be championed, with a strong focus on the modern demand of biodynamic, organic, and minimal intervention wines, as well as a selection of wines which stay true to their classical roots. Special wines will also be available at an accessible price-point, with the mission to get people trying bottles they wouldn’t ordinarily try.

Hackney Coterie is set to open in July and can be found at 230 Dalston Lane, London, E8 1LA.

A popular New York restaurant, Sunday in Brooklyn will open its first international location in London later this month. A fixture on Brooklyn’s dining scene, the Williamsburg original is known for its inventive spin on American classics, playful cocktails and brunch menu. Opening in Notting Hill, the new restaurant will bring all of its best-loved dishes and drinks to London, including a few UK specials such as beef tartare with Worcestershire egg yolk and Walkers Salt & Vinegar crisps; whole smoked artichoke with saffron aioli; clams casino, featuring littleneck clams with garlic bread crumb and smoky bacon. Sunday in Brooklyn will also serve brunch dishes such as malted pancakes with hazelnut praline and brown butter; The Don Reuben omelette with mole sauce, goat’s cheese and roasted mushrooms; plus biscuits and gravy with poached eggs and sambal. To drink, the restaurant will serve a selection of natural wines and signature cocktails.

Sunday In Brooklyn is set to open on Thursday 22nd July and can be found at 98 Westbourne Grove, London, W2 5RU.

Specialising in Yakitori (literally meaning ‘grilled bird’), Junsei is the first venture from chef Aman Lakhiani. Meaning ‘pure’ in Japanese, Junsei is a nod to the traditional Yakitori cooking process, with all skewers grilled over Binchōtan, considered the most pure charcoal in the world. Honouring every part of the chicken, the menu is centred around Yakitori skewers, with over 20 variations available, including shiso breast with ume; heart; crispy skin; tsukune; and neck. A range of vegetarian options are also available, including shiitake mushrooms, soy marinated quail eggs, and fried tofu with ginger and spring onion, while a selection of sharing plates are also offered.

Desserts, on the other hand, also take inspiration from the charcoal, including smoked birch crème brûlée, and strawberry mochi. An Omakase menu is also available, featuring eight skewers, some of which are exclusive to the Omakase menu, and sides. Moreover, the new restaurant also has an extensive sake and shochi menu, including Tamagawa “Red Label” Heirloom Yamahai Genshu, the only sake made by an English sake master.

Junsei is open now and can be found at 132 Seymour Place, London, W1H 1NS.

Taking over the kitchen at the new Sambrook’s Brewery Tap in the historic Ram Quarter site, Crust Bros is set to open its second site. Joining Sambrooks’ 15-strong selection of beers, Crust Bros’ new restaurant will serve its range of ‘leopard-print crust’ pizzas. With bases made entirely from scratch using 00 flour, fresh yeast, and 48-hour-proved dough, Crust Bros pizzas are characterised by their soft bases and big, speckled crusts. At the new site, signature pizzas will be served, including the likes of ‘Notorious P.I.G’ with tomato, mozzarella, basil, ham, and mushrooms; and ‘Olivin’ It Up’ with tomato, mozzarella, basil, artichokes, olives, and mushrooms. A menu of totally customisable pizzas will also be available. Vegan cheeses are also available, as well as gluten-free bases. On weekends, Crust Bros and Sambrook’s will also serve a bottomless brunch, offering 90 minutes of unlimited pizza and beer, priced at £40.

Former GM and partner at Hill & Szrok, Jimmy Stephenson will open Hector’s with his wife Anna Shaffer. Inspired by the cave à mangers of Paris and drinking holes of San Sebastian, the bottle shop and wine bar occupies a site in De Beauvoir, Hackney, selling a mixture of natural and classic European wines. The bottle shop is already open, while the space will also act as a wine bar in the evenings, as of later this month. A short, regularly changing selection of wines by the glass will be available here, with new, interesting bottles opened daily, and a cellar list of unusual and rare vintages will also be available. As for the food offering, expect European-inspired bar food such as Cantabrian anchovies with olive oil and rose petals; courgette carpaccio; salted Catalan almonds; sardines on toast; and Pâté en croute.

Hector’s is currently open as a bottle shop, with the wine bar set to launch on Thursday 22nd July. Hector’s can be found at 49a Ardleigh Road, London, N1 4HS.

London In The Sky, North Greenwich

A unique outdoor dining experience, London In The Sky has returned to the O2 Arena for its longest season yet. Lifting diners 100ft above the ground, this year’s London In The Sky pop-up will take place until Sunday 26th September, having launched with an event which hosted 300 key workers from Lewisham and Greenwich NHS trust for free. Seats at the pop-up’s two 22-seat tables can be booked for breakfast, brunch, lunch, afternoon tea, dinner, and cocktails. Moreover, London In The Sky will also host an all-day ‘Sunday Sessions’ party this August Bank Holiday weekend, with celebrity DJs, live musicians, and cocktails.

London In The Sky will run until Sunday 26th September and can be found at Peninsula Square, London, SE10 0DX.

For summer 2021, Los Angeles’ the Polo Lounge at The Beverly Hills Hotel will pop-up at The Dorchester Rooftop. Until the end of August, the new restaurant will be open daily for lunch and dinner, with the al fresco space transformed to reflect the original restaurant’s famous décor, including candy-stripes and pink bougainvillea flowers. As for the food, a selection of Polo Lounge classics will be available, including the restaurant’s signature McCarthy Salad, a chopped salad named in honour of the polo player Neil McCarthy who regularly visited to Beverly Hills Hotel during the 1960s. Polo Lounge cocktails will also be served, including the Prickly Paloma, made with tequila, prickly pear grapefruit, lime, and pink salt.