A protester dressed as one of the furry mammals followed the Foreign Secretary with placards that read “I am innocent” and “176,000 badgers shot by Defra. 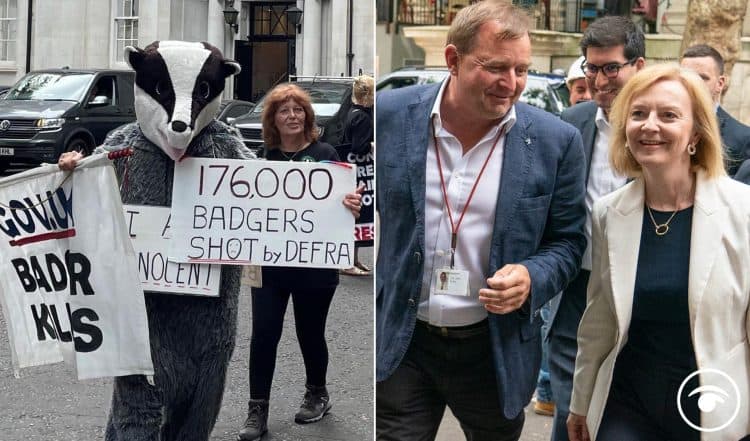 Liz Truss was ambushed by a group of badger cull protesters as she arrived for a hustings with Conservative councillors in London.

The Tory leadership hopeful, fittingly dressed in black and white, was met by the noisy demonstrators as she walked up to the Local Government Association’s offices in Westminster.

Back in 2015 at the annual National Farmers Union (NFU) conference, Liz Truss set up a pre-election badger battle with Labour, which has promised to end what it calls the “ineffective and inhumane” programme intended to halt the spread of TB in cattle.

Truss said: “We will not let up, whatever complaints we get from protesters groups. We are in it for the long haul and we will not walk away.” She said culls in areas “where the disease is rife” were an important part of a 25-year strategy to eradicate bovine TB, which also includes controls on cattle movement and vaccination.

Protesters chanted “Save our badgers, stop the cull”, drowning out any questions from journalists hoping to gauge Ms Truss’s mood ahead of her grilling by local government politicians.

A protester dressed as one of the furry mammals followed the Foreign Secretary with placards that read “I am innocent” and “176,000 badgers shot by Defra” (Department for Environment, Food and Rural Affairs).

Ms Truss oversaw the culling of badgers as environment secretary as part of a programme intended to halt the spread of TB in cattle.

But critics want a moratorium on badger culling in England, calling the policy “inhumane and ineffective” and not backed up by scientific evidence.

Ms Truss and her rival Rishi Sunak were holding the first in a series of summer hustings on Thursday, a day after making it into the Tory leadership run-off.

The pair will tour the UK to take part in 12 hustings for Tory members who will vote for the next prime minister, with the result being announced on September 5.

Mr Sunak, who faced the Conservative Councillors’ Association first, avoided the growing crowd of protesters and the media as he slipped out unnoticed.

Ms Truss followed suit by leaving via a side entrance, but her exit did not go unnoticed by the badger proponents.

They rushed to her car and surrounded it as she got in, shouting: “Stop killing badgers.”