It seems that Business Secretary Kwasi Kwarteng has seemingly gone on strike by refusing to appear in front of a select committee. 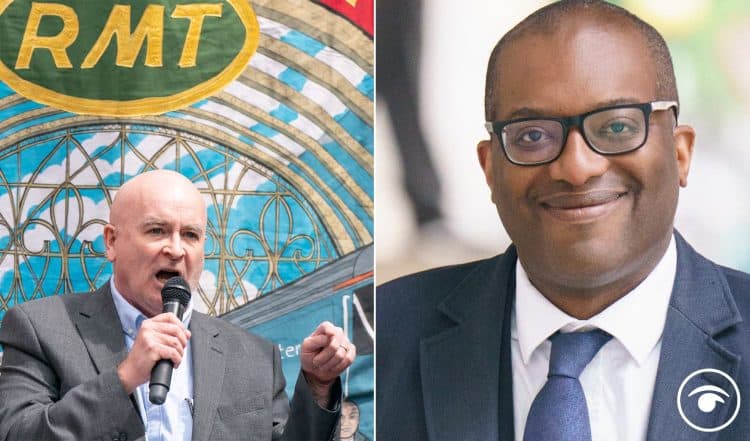 Businesses can now provide skilled agency workers to plug staffing gaps caused by strike action under changes to the law coming into force on Thursday, the Government has announced.

The move follows a wave of strikes by railway workers in recent weeks in a bitter dispute over jobs, pay and conditions, with more planned in the coming weeks.

Strikes have also been held by Post Office workers, while union members at BT and the Royal Mail recently voted to take industrial action.

Unions and Labour have criticised changing the law.

The Government said from today, businesses most affected by industrial action will be able to call upon skilled, temporary staff at short notice to fill essential positions.

“This will help to mitigate the disproportionate impact strike action can have both on the UK economy and society by allowing crucial services, that we all use on a daily basis, to continue functioning,” it said.

“Today’s change in the law will apply across all sectors, for example, in education where strike action can force parents to stay at home with their children rather than go to work.”

Business Secretary Kwasi Kwarteng said: “In light of militant trade union action threatening to bring vital public services to a standstill, we have moved at speed to repeal these burdensome, 1970s-style restrictions.

“From today, businesses exposed to disruption caused by strike action will be able to tap into skilled, temporary workers to provide the services that allow honest, hardworking people to get on with their lives. That’s good news for our society and for our economy.”

Kwarteng became the third Cabinet minister has pulled out of an appearance before a House of Commons committee at short notice.

Business Secretary Kwasi Kwarteng had been due to answer questions on Wednesday afternoon from the Environmental Audit Committee on accelerating the transition away from fossil fuels and securing energy supplies.

But Mr Kwarteng wrote to the committee’s chairman, Philip Dunne, on Wednesday morning to say he could no longer attend.

The minister gave no reason for pulling out, but offered to rearrange for a date in September, after MPs return from their summer recess.

A new prime minister is due to be announced on September 5, the first day that the Commons returns, meaning a new business secretary could be in place before the meeting can be rearranged.

Secretary of State for Transport Grant Shapps added: “While next week’s rail strikes will come too soon to benefit from this legislation, it’s an important milestone reflecting the Government’s determination to minimise the power of union bosses.

“For too long, unions have been able to hold the country to ransom with the threat of industrial action, but this vital reform means any future strikes will cause less disruption and allow hardworking people to continue with their day-to-day lives.”

The Government has also changed the law to raise the maximum damages that courts can award against a union when strike action has been found to be unlawful.

The changes apply across England, Scotland and Wales.

Related: Rail strikes to go ahead as ‘no-one’s coming to the table’, union leader says