Stephen Yaxley-Lennon, the far-right anti-Muslim campaigner who changed his name to football hooligan Tommy Robinson was spotted sneaking out early from the North West England vote count in Manchester last night.  The former BNP and EDL member’s campaign to win a seat in the European Parliament he has been railing against has failed spectacularly.  Yaxley-Lennon […] 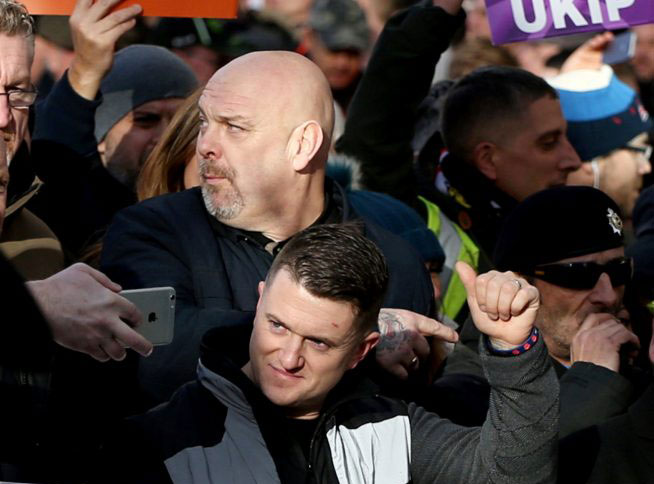 The former BNP and EDL member’s campaign to win a seat in the European Parliament he has been railing against has failed spectacularly.

Yaxley-Lennon endured underwhelming turn-outs at rallies around the North West, milkshake peltings, a social media ban for race hate-peddling and a possible two-year jail sentence looming after he lost a court case to stop a prosecution for potentially disrupting a set of grooming court cases by filming people in a trial.

Despite a campaign in which he proclaimed he was riding a far-right wave, Yaxley-Lennon came eighth with just 2.2% of the North West votes, lashing out as it quickly became apparent he was more likely to be eating porridge in prison than take a seat in the European Parliament.

The English Defence League co-founder compared himself to the US President and blamed the government for his spectacular loss.

“Trump won his campaign on social media. Brexit was won on social media. I’m banned from social media,” he railed at reporters in Manchester. “My ability to fight a fair campaign is gone, orchestrated and organised by the government. I feel like I have been fighting with my hands tied behind my back.”

With UKIP on course to fail to win a single seat for the first time, the anti-Brexit party’s choice of controversial candidates backfired colossally too.

Carl Benjamin – also known as YouTuber Sargon of Akkad – unapologetically  joked about raping Labour MP Jess Phillips, precipitating a vicious campaign against her by social media trolls, quipped about the age of consent, and used “nigger” as a taunt, yet was chosen as an MEP candidate by UKIP.

Despite facing a barrage of milkshakes around the campaign trail too, the social media personality failed to win a seat in the European Parliament he was calling for the UK to leave.

Fellow internet vloggerMark Meechan, also known as Count Dankula, infamous for teaching a pug to do Nazi salutes, is unlikely to win a UKIP MEP seat in Scotland, where results are expected soon.

Carl Benjamin came sixth for UKIP in the South West, with just 3.2% of votes.