Standing as an independent candidate for the North West in the European Parliamentary elections hasn’t proved a walk in the park for far right Islamophobe Tommy Robinson. Today, turning up to another underwhelmingly attended rally in Bury, Greater Manchester, the far-right activist, whose real name is Stephen Yaxley-Lennon was pelted with strawberry milkshake outside McDonalds. […] 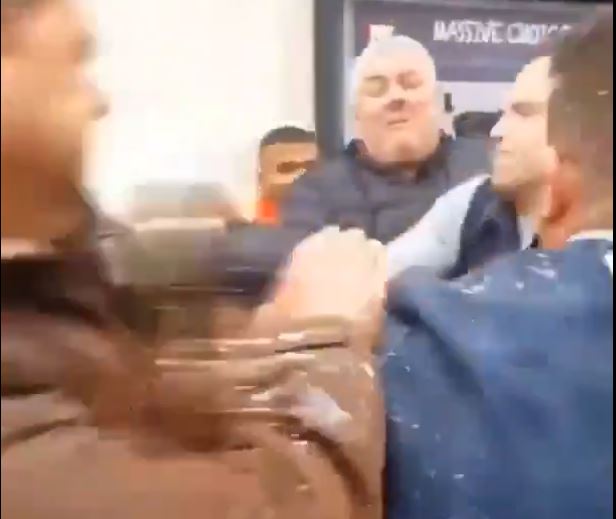 Standing as an independent candidate for the North West in the European Parliamentary elections hasn’t proved a walk in the park for far right Islamophobe Tommy Robinson.

Today, turning up to another underwhelmingly attended rally in Bury, Greater Manchester, the far-right activist, whose real name is Stephen Yaxley-Lennon was pelted with strawberry milkshake outside McDonalds.

Yaxley-Lennon accused whoever threw the milkshake that spattered him of being “some Muslim supporter” as his followers ran through town looking to confront the culprit.

Then, this man got Yaxley-Lennon from rather closer range, shouting “that’s what you get for being a fascist” as Yaxley-Lennon and his followers punched the young man.

Yaxley-Lennon, banned from all major social media for hate speech was appointed by Ukip leader Gerard Batten as a Grooming Gangs Adviser, but is running as an independent candidate, possibly because of his criminal past and as he was co-founder of the far-right Islamophobic English Defence League.

So far his campaign has not been the walk in the park he may have hoped for, the crowds he had hoped to pull largely outnumbered by anti-racism protestors.

Yesterday a mum in Salford accused him of “spouting any old shite” during a live broadcast he was making on the street.

Tommy Robinson has already violated electoral law just 24 hours after he announced he will run for MEP in the North West of England.

The far-right independent candidate was told by police to stop handing out free burgers and hot dogs to supporters at a rally because free food is paramount to “bribing voters”.