As the old adage goes, only when the working class stop reading right-wing news will we see progressive change. 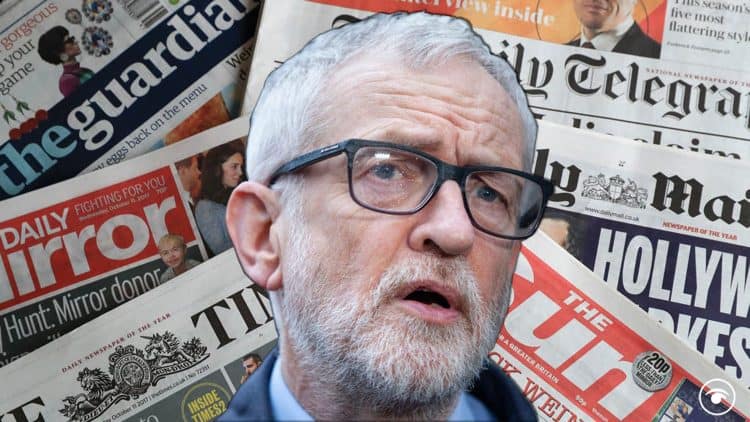 On the evening of Thursday 8th June 2017, something quite remarkable happened.

Stood in a pub next to the Houses of Parliament I watched in amazement as the familiar bong of the 10pm exit polls sounded, predicting a collapse of the Conservative’s majority to a rampant Jeremy Corbyn, who had achieved the improbable against the odds.

Following consecutive general elections decided by the whims of Fleet Street, this one had bucked the trend. Press hostility towards the new-look Labour Party had failed to derail the surge of ‘Corbynism’, which had gripped the country in a way few political movements ever had.

At the heart of its meteoric rise was a new band of ‘alternative’ left-wing media set up by a “generation of radical activists” ready to “take on the established press”, the New Statesman noted at the time.

It was they who, according to Press Gazette, stole the most social media views over the course of the campaign, with this very publication claiming the mantle of ‘most shared article of the general election’.

Meanwhile, across town at the headquarters of The Times, rumour had it that Rupert Murdoch stormed out of the election party having seen the unexpected results.

In the run-up to the election News Corp publications had backed Theresa May to ‘kill off Labour’ (The Sun) and achieve an ‘election landslide’ (The Times), with voters expected to desert Corbyn.

Both papers had May down to increase her majority to over 100 seats just weeks before Brits headed to the ballot box.

In the end, the prime minister’s majority was slashed by 13 and the popular vote was split in half (42.4 per cent Conservative to 40 per cent). Corbyn increased Labour’s vote share more than any of the party’s leaders since 1945.

Subsequent analysis would show that the MP for Islington North was just 2,227 votes away from having a claim on the keys to Downing Street, a feat he would have achieved without any help – and, indeed, with a great deal of hindrance – from the popular press.

But rather than bringing about a collective re-think on the universality of Corbynism, the mainstream media doubled down and set about driving drive voters the other way.

Researchers at Loughborough University found in the subsequent election in 2019, press hostility towards Corbyn and the Labour Party in the mainstream media doubled compared to the 2017 election.

The Conservatives, conversely, enjoyed a halving of negative media coverage.

Speaking to The London Economic, Noam Chomsky described the media onslaught as a “major assault.”

“Anything that could be thrown at him was,” he said. “Again, pretty much across the spectrum, The Guardian, right-wing press, ‘we got to get rid of this guy’.”

It disempowered voters, who – understandably – bought the narrative that was being peddled across the board.

Corbyn was bad news for big media barons, and it really told.

But big media is only one part of the problem.

Big Tech has been wielding increasing amounts of power over media publications for years, strangling their access to market and favouring publications who are deemed to be more ‘established’.

Facebook algorithms rolled out over the years since 2017 have made it increasingly hard to compete for alternative publications, with Google search traffic overwhelmingly primed towards outlets who have the resources and capabilities to bend computer codes in their favour.

Recently, a mistake by YouTube showed just how powerful Big Tech has become: Novara Media’s channel was taken down “without warning or explanation” due to ‘violations’.

It was restored shortly after following an outcry on social media, but according to Ed Procter, chief executive of the Independent Monitor for the Press, it was at least the fifth time a news outlet had material deleted by YouTube, Facebook or Twitter without warning.

The rise of the right

These challenges have come to the attention of the wider media, with the New Statesman asking what is next for alternative left media in a post-Corbyn world and rabble-rousing right-wing blog Guido Fawkes questioning why the left is trailing the right in the audience stakes.

According to their research, left-wing sites aren’t performing very well in terms of raw audience size.

“To give you an idea how much worse they are faring after the Corbyn-era glory days, consider this: Toby Young’s Daily Sceptic alone had last month more online readers than the New Statesman, Novara Media and Morning Star combined!,” they say.

Conveniently, they left The London Economic out of the picture.

But it does raise a serious point.

With the Conservatives holding onstoically to a handsome lead in the polls after two years of – how shall we put this? – turbulent leadership, there is clearly a void in the media landscape that was once filled with the much-needed balance we so desperately need right now.

As the old adage goes, only when the British working class stop reading right wing news will we see progressive change.

When that day will come, however, is another debate entirely.