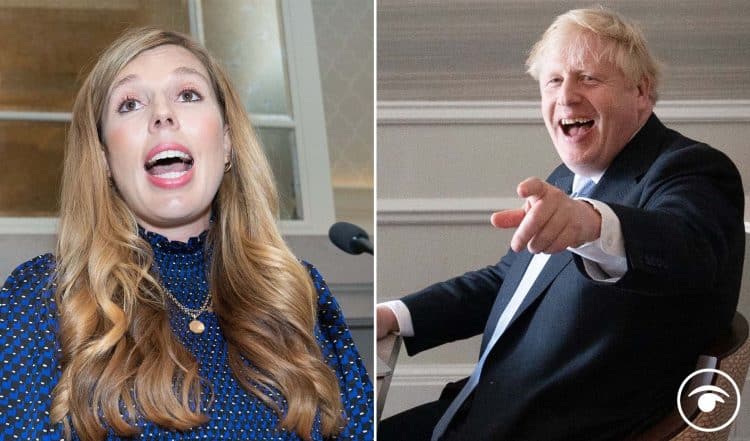 Carrie Johnson has said her husband, the Prime Minister, is “completely committed” to protecting the gains of the LGBT+ community and extending them further.

She defended Boris Johnson’s track record on LGBT+ rights, with the Prime Minister often criticised over his use of the slur “tank-topped bum boys” to refer to gay men in a newspaper column.

The “bum boy” quote dates back to a 1998 Telegraph column about the gay MP Peter Mandelson’s resignation from the New Labour cabinet.

Here it is, in full, in its original context.

“In the Ministry of Sound, the tank-topped bum boys blub into their Pils.

But Mrs Johnson praised her husband’s efforts and highlighted Conservative activists’ role in modernising the party as she gave a speech at a pride event on the fringes of the Tory conference in Manchester on Tuesday.

“Whether you are LGBT+ or an ally like me we are all committed to equality and acceptance for everyone whoever you are and whoever you love,” she told a crowded room in the Midland Hotel.

“There are still those who tell me that being LGBT+ and a Tory is somehow incompatible, well, looking around me tonight, we can see that is blatantly untrue.

“Many of you here tonight have helped play a part in the journey our party has taken on gay rights and we can now say with huge pride that it was a Conservative prime minister who delivered equal marriage in England and Wales.

“I want you all to know that we now have a Prime Minister who is completely committed to accepting those gains and extending them further.”

“Good”, replied a member of the audience, before Mrs Johnson went on to praise the Prime Minister’s record on LGBT+ rights.

“Boris also wanted me to remind you that as mayor he led the pride parade wearing a rather fetching pink stetson, which I think we should encourage him to do again,” Mrs Johnson added to laughter.