Theresa May’s first major live appearance since a shambolic Conservative Party Conference speech in which she was served a P45 by a comedian was a chance to make the comeback the beleaguered Prime Minister urgently needed. Instead it was a shocking balls up. Three times when pressed by LBC presenter Iain Dale, the PM refused […] 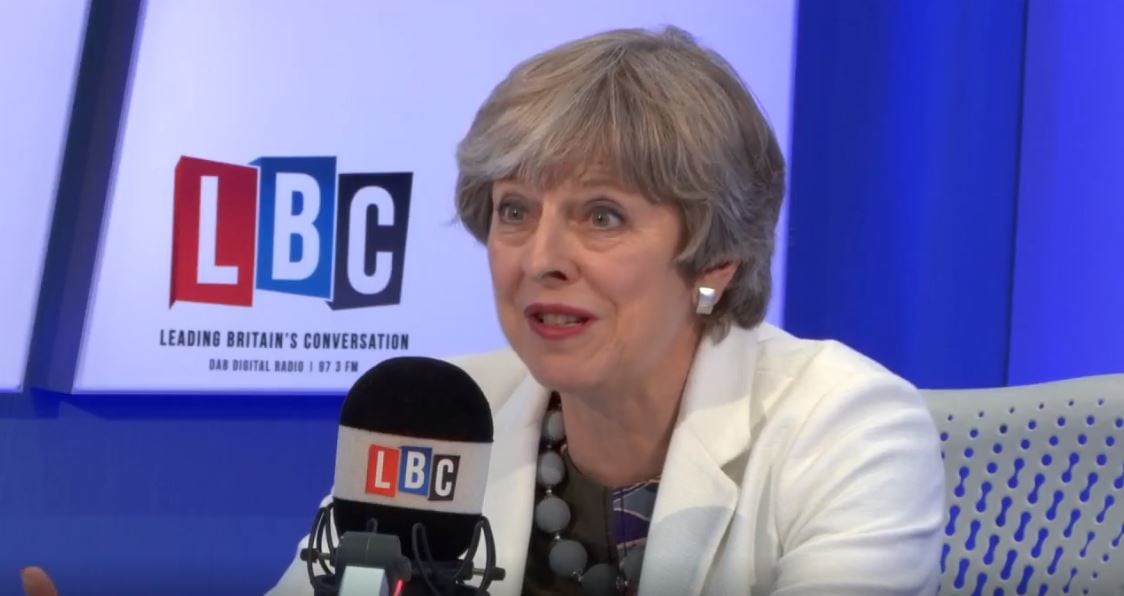 Theresa May’s first major live appearance since a shambolic Conservative Party Conference speech in which she was served a P45 by a comedian was a chance to make the comeback the beleaguered Prime Minister urgently needed.

Instead it was a shocking balls up. Three times when pressed by LBC presenter Iain Dale, the PM refused to say how she would vote tomorrow if there was another referendum on leaving the EU.

Yet three times when asked,  May refused  guarantee that 3.2 million EU citizens living in the UK can stay if as she warned this week might happen, her government fails to secure a deal with the EU.

And perhaps the most shocking admission from the PM was when presenter Iain Dale played her a clip of the then Tory Chancellor George Osborne confessing that under the Conservatives Britain did not have a plan for Brexit just before the EU Referendum. Dale asked:

“Has that lack of planning proven costly?”

And Theresa May blithely replied: “I don’t think it’s been costly, no…”

So according to the Tories having absolutely no plan for the greatest constitutional and economic upheaval since the ‘Glorious Revolution’ isn’t a colossal mistake.

And not one that Theresa May thinks might be “costly” – even though she refused in Parliament this week to come clean when asked by Labour MP Catherine West what the cost to Britain of leaving the EU with a deal and the amount it will cost if she fails to negotiate one.

Instead Theresa May admitted that there might not even be a deal until the last minute. “We will not have negotiated that deal until, I suspect, close to the end of that period that’s been set aside for it,” replied the PM. “At that point, we will be able to see what the benefits of that deal will be for the British economy.”

It’s no wonder even this Conservative Party member phoned in cringingly demanding their party leader resign or let Jeremy Corbyn be the next Prime Minister:

Ouch. The painful moment a Conservative party member calls Theresa May and tells her to resign https://t.co/6s1AMtrFAr pic.twitter.com/6qifPfVhpZ