The Conservative Party Conference in Manchester has been slammed for a Boeing-sponsored “Drink Tank” while the corporation aggressively pursues Bombardier, urging the US to impose job-threatening tariffs. In a shameful Tory conference embarrassment, the Secretary of State for Health Jeremy Hunt is due to speak tonight at a drinks sponsored by Boeing, the US air […] 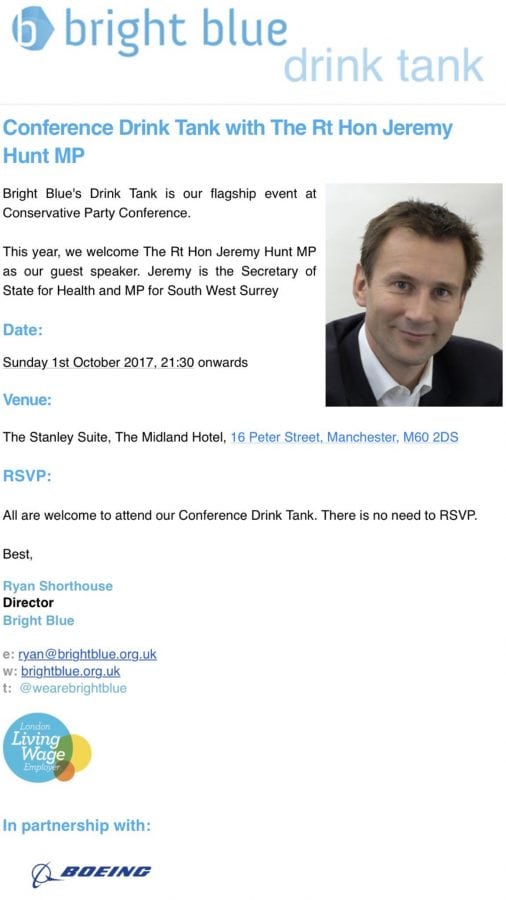 The Conservative Party Conference in Manchester has been slammed for a Boeing-sponsored “Drink Tank” while the corporation aggressively pursues Bombardier, urging the US to impose job-threatening tariffs.

In a shameful Tory conference embarrassment, the Secretary of State for Health Jeremy Hunt is due to speak tonight at a drinks sponsored by Boeing, the US air giant putting a squeeze on the smaller aircraft manufacturer, with thousands of UK jobs at stake.

This week Theresa May said she was “bitterly disappointed” by the US Government imposing massive tariffs on sales of Bombardier’s C-Series passenger jet, under pressure from Boeing, a company that didn’t even bid for the contract, yet is threatening thousands of manufacturing jobs in Northern Ireland.

But Unite the trade union representing much of the workforce whose jobs are on the line now, urged the Prime Minister to do more, criticising Theresa May for being a “bystander” as the US government ignored the massive job losses its move would entail in Belfast.

Jeremy Hunt due to swig drinks on Boeing's while our Bombardier workers worry about thier jobs. Whose side Tories on? #backBombardier pic.twitter.com/NA2cZisZLY

A Unite spokesperson told The London Economic: “It’s remarkable that Jeremy Hunt is schmoozing with Boeing picking up the bar tab when four and a half thousand jobs are at stake in Belfast. The Government needs to follow through with what it said last week in reminding Boeing that the UK is one of its largest customers.

“This raises serious questions about what side the Government is on.”

If Govt serious about standing up for our Bombardier workforce @Jeremy_Hunt CAN'T be schmoozing with Boeing tonight https://t.co/GoDuhrZaT0 pic.twitter.com/0XH3n9536T

Unite assistant general secretary Tony Burke criticised Theresa May’s lacklustre response to the Bombardier affair: “The prime minister cannot be a bystander in all of this and needs to pull every lever to ensure Bombardier jobs are protected from the bullying behaviour of Boeing.  Soon, a quarter of all UK defence spending will be going to the US – this must give us a voice that should be heard.

“Theresa May must also pressure the US government and ask why its department for commerce has decided to impose massive tariffs without allowing Bombardier the chance to put its case.

“Time is not on our side.  With a World Trade Organisation hearing taking up to three years, prime minister Theresa May must act fast, targeting the US government, to preserve the thousands of jobs that depend on Bombardier’s Belfast operation.”

The whole affair as well as being tragic for the jobs that may be lost in the UK and Canada where Bombardier are based – has left Theresa May appearing powerless while she makes UK – US trade a key plank of the UK’s economic progress post-Brexit.