In a live interview on LBC radio streamed across social media, Prime Minister Theresa May just refused THREE times to say if she would vote for a Brexit if there was another EU Referendum. The Prime Minister was originally a supporter of the Remain Campaign, all be it a rather shy one who kept out […] 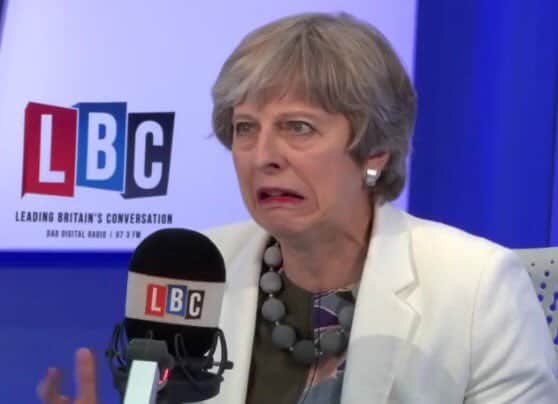 In a live interview on LBC radio streamed across social media, Prime Minister Theresa May just refused THREE times to say if she would vote for a Brexit if there was another EU Referendum.

The Prime Minister was originally a supporter of the Remain Campaign, all be it a rather shy one who kept out of the public eye during the EU Referendum campaign. (Though she did deliver this very persuasive speech to business leaders outlining why she was convinced replacing European markets with ones further afield was doomed to failure.)

But just this week she insisted that Britain would be leaving the EU even if her government failed to come to a deal with the other European States to ensure an orderly continuity of trade. May even insisted customs would be prepared for the eventuality of tariff borders going up between Britain and Europe.

Yet today when pressed by Iain Dale in the live LBC interview, she refused to say whether she would vote for Brexit if there was another referendum tomorrow.

Theresa May’s first interview since her Tory Conference omnishambles led to calls for her to resign started off gentle but when the veteran LBC presenter pressed her on this question she avoided it three times.

“Well, I voted Remain for good reasons at the time, but circumstances move on,” insisted the Prime Minister.

“The important thing now is we should all be focused on delivering Brexit and delivering the best deal.

“So you can’t tell me that you would vote Leave now?” Iain Dale asked her again, adding, “Jeremy Hunt when I interviewed him at the Conference told he that he voted Remain in the referendum – he was a chief advocate of Remain – he said now he would vote for Brexit because he says George Osborne’s economic predictions did not come true and he said he was fed up with the belligerent attitude of the European Commission.

“He says he could change his mind. I don’t quite understand why you can’t, seeing you are Prime Minister leading us into Brexit?”

A flummoxed Theresa May replied: “Iain, I could sit here and I could say I’d still vote Remain or I’d vote Leave just to give you an answer to that question.

“I’m being open and honest with you. What I did last time around was I looked at everything and came to a judgement and I’d do exactly the same this time around.

“But we’re not having another referendum and that’s absolutely crucial.”

The PM is set to get a roasting after this interview.

Theresa May has just told Iain Dale she won’t “answer hypothetical questions”, but then warns what would happen if Jeremy Corbyn became PM

Tory member on #MayOnLBC 'We have a problem Mrs May, the only way we can stop Corbyn is with a new leader,you have to go' OUCH

EU making May look stupid, which they’ll go on doing, because she hasn’t got the BALLS to stand up to them!!