A tiny planet that orbits the Sun beyond Neptune has a Saturn-style ring, it has been revealed. Astronomers say the discovery suggests the stunning bands made up of dust, rocks and ice are not as rare in our solar system as previously thought. They used observations from 12 ground-based telescopes across Europe to measure Haumea’s […] 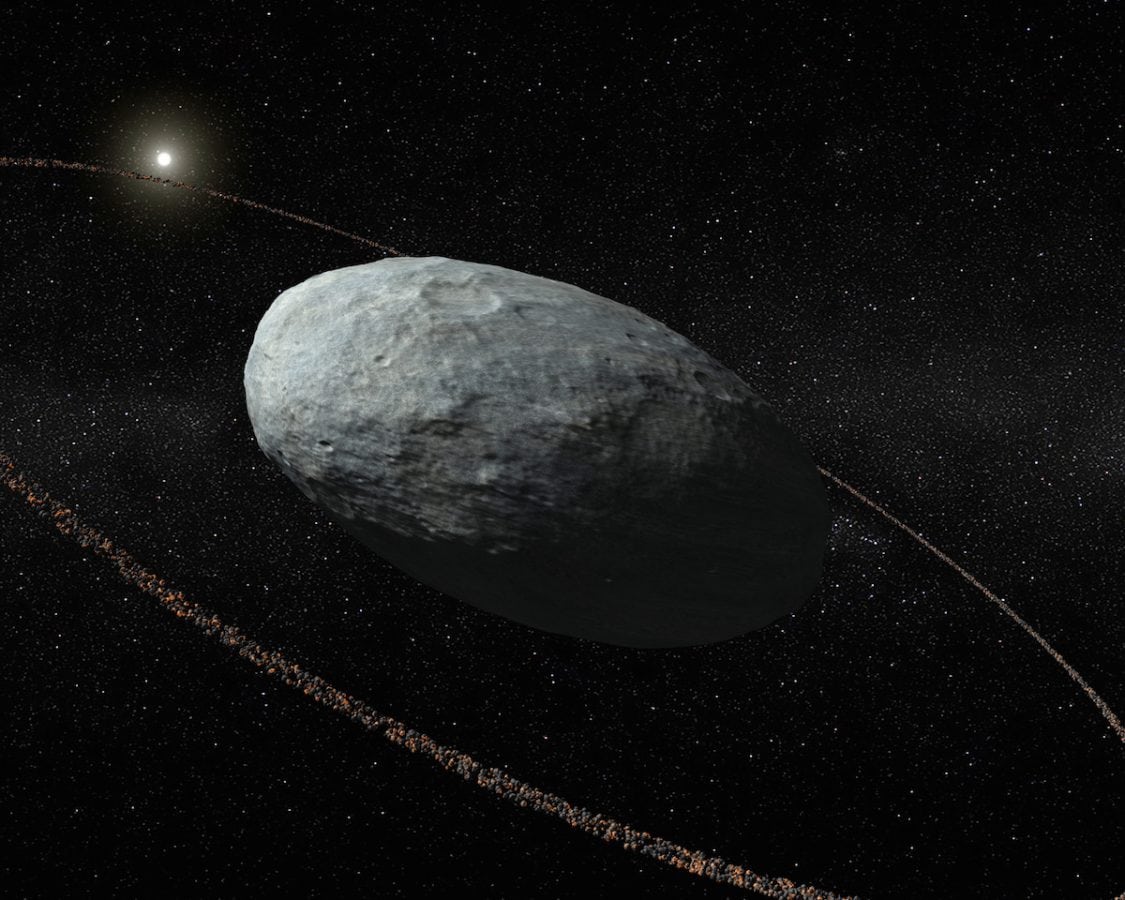 A tiny planet that orbits the Sun beyond Neptune has a Saturn-style ring, it has been revealed.

Astronomers say the discovery suggests the stunning bands made up of dust, rocks and ice are not as rare in our solar system as previously thought.

They used observations from 12 ground-based telescopes across Europe to measure Haumea’s size, shape and density with unprecedented accuracy.

The mysterious icy world was only discovered in 2004. It’s the first time a ring has been spotted around a distant body in the solar system.

Haumea spins incredibly fast – causing the solid rock its made of to flow out. This is the reason for its strange shape – which has been likened to an elongated egg or flattened rugby ball.

The researchers also discovered the ring’s orbital period is three times Haumea’s spin period which – at less than four hours – is one of the quickest known.

Dr Jose-Luis Ortiz, of The Institute of Astrophysics of Andalusia in Granada, Spain, said: “That is, Haumea rotates three times on its axis in the time that a ring particle completes one revolution.”

Planetary rings capture the imagination with their stark beauty. Viewing Saturn and its extended ring system through even a small telescope is awe-inspiring and has drawn many people into studying science and engineering.

In the solar system rings were believed to be present solely around the four gas giants – although only those of Saturn are easily visible from Earth.

But in the past few years they have been unexpectedly identified around Centaurs — small bodies whose orbits lie between those of Saturn, Uranus, Jupiter and Neptune.

Dr Ortiz said: “Haumea – one of the four known trans-Neptunian dwarf planets – is a very elongated and rapidly rotating body.

“The Centaur Chariklo was the first body other than a giant planet known to have a ring system and the Centaur Chiron was later found to possess something similar to Chariklo’s rings.

“Here we report observations from multiple Earth-based observatories of Haumea passing in front of a distant star.”

Trans-Neptunian objects are the most distant solar system objects viewable from Earth.

Like their mythological counterparts centaurs are hybrids – embodying traits of both asteroids and comets.

Dr Ortiz and colleagues used a technique called ‘stellar occultation’ in which the light from a distant star is blocked when an object passes in front of it.

They predicted Haumea would cross paths with the star URAT1 533-182543 and arranged observations from 12 different telescopes at 10 different laboratories on 21 January 2017.

These were situated in Slovakia, Hungary, Czech Republic, Sloveniaa, Germany and Italy.

By mapping the amount of dimming caused by Haumea they could identify the ring and its other features.

They also calculated its longest axis is at least 1,430 miles (2,300 km) which is larger than earlier estimates.

Previous research has shown 75 per cent of Haumea’s surface is covered with a reflective surface of water ice.

The entire surface of Hi’iaka, one of Haumea’s two moons along with Namaka, is also covered in this icy shell.

Around 1,200 miles long Haumea resides in the Kuiper Belt – like fellow dwarf planet Pluto – and is one of five dwarf planets orbiting the Sun.

It is named after the Hawaiian goddess of fertility and childbirth.

The latest findings published in Nature opens up new avenues of research in the trans-Neptunian region.

Dr Ortiz said: “The discovery of a ring around Haumea – a much more distant body, in a completely different dynamical class, much larger than Chariklo and Chiron, with satellites and with a very elongated triaxial shape – has numerous implications, such as rings being possibly common also in the trans- Neptunian region from which Centaurs are delivered, and opens the door to new avenues of research.”

Dr Amanda Sickafoose, a planetary astronomer at Massachusetts Institute of Technology, who reviewed the findings for the journal, said: “Haumea is 50 times further from earth than is the Sun.

She said: “The authors’ discovery prompts speculation that ring systems in the outer
solar system are not uncommon and that we can anticipate more discoveries in this region.”