Boris Johnson’s Leader of the Commons admits the problem with a second referendum is British public would vote to stay in the EU. 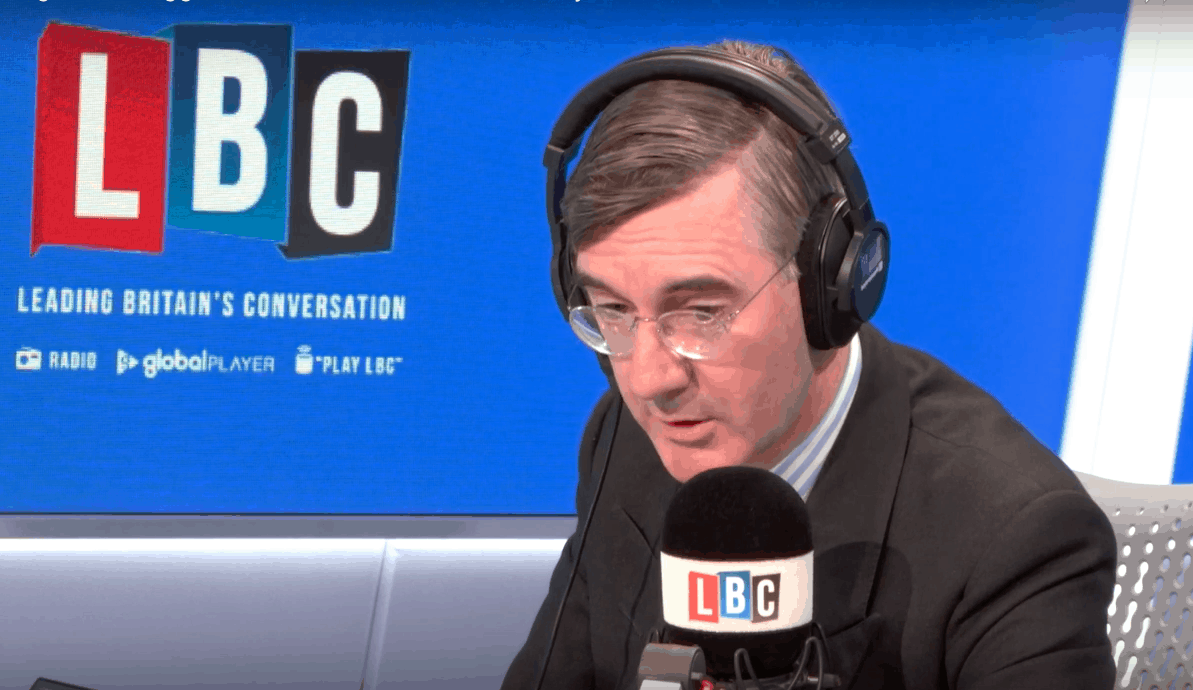 Yes he just said that.

As the country faces the prospect of leaving the EU with no deal amid warnings from the major medical unions among others of the catastrophic effects that could have, Brexit ultra and head of the Tories’ shadowy ERG, Jacob Rees-Mogg had the privilege of airtime on LBC today.

Rees-Moggs’ Tory colleagues will reportedly have Tory whips withdrawn if they attempt to stop Britain facing an no-deal Brexit this week. Meanwhile Boris Johnson still refuses to answer Tory rebels’ questions about whether he has actually come up with an alternative to the backstop he objects to, or even attempted to negotiate any actual alternative to leaving the EU with no deal.

Can the public make an ‘informed decision’ on Brexit?

But the most memorable – and telling – would be this question, from a listener who asked: “do you still think the referendum is relevant considering all the new information we’ve got now?

“Or whether a public vote wouldn’t just clear up the air? – All the information is out, we can make an informed decision now.”

Jacob Rees-Mogg’s reply was a rather startling admission: “The problem with that is that would overturn the result that we’ve already had.”

The Brexit ultra hastily added: “And if you have a second vote, say it goes the other way, do you then have a third vote? When do you stop?

“On what basis should the second vote outweigh the first vote?”

Unsurprisingly people have been pointing out that’s how democracy work.

One of the ways in which the public is more informed now is over the impact of a no-deal Brexit, an eventuality much of the current cabinet ruled out, both in the EU referendum campaign and over the past year.

In a powerful intervention, the major medical unions warned today of the devastating consequences to the NHS of the chaos of no-deal Brexit to access to essential medications and recruitment after a decade of Tory austerity.

Yet when a senior doctor rang into the LBC show, Rees-Mogg dismissed him as “fear-mongering” and a “Remoaner” after he challenged the Commons Leader to say how many people he would accept could die as a result of a no-deal Brexit.

Dr David Nicholl, a consultant neurologist was involved in the Operation Yellowhammer report into the impact of a no-deal Brexit on the NHS, called in to LBC’s Ring Rees-Mogg show to ask what “mortality rate” he would accept if the UK crashed out of the EU without a deal.

Dr Nicholl asked: “Having been involved in writing the plans for mitigation and having whistle-blown because I felt they were unsafe, what level of mortality rate are you willing to accept in the light of a no-deal Brexit?”

Rees-Mogg scoffed: “I don’t think there’s any reason to suppose that a no-deal Brexit should lead to a mortality rate.

“I think this is the worst excess of Project Fear and I’m surprised that a doctor in your position would be fear-mongering in this way on public radio.”

To which Dr Nicholl told the prominent Brexiteer: “Can I remind you I wrote the plans of mitigation?”

But Mr Rees-Mogg replied: “Well you didn’t write very good plans if you hadn’t worked out how to mitigate, had you?

“It’s fortunate they are being written by other people now who are serious about mitigating, rather than Remoaners.”

‘You should be ashamed’

Dr Nicholl pointed out that people could die because of potential problems with access to drugs and radioactive isotopes in the event of a no-deal Brexit.

But Rees-Mogg dismissed the concerns the major medical bodies have voiced too, insisting that there were “reserve plans to fly drugs in if necessary”.

He said: “This is a major focus of Government policy. I think it’s deeply irresponsible, Dr Nicholl, of you to call in and try to spread fear across the country.

“I think it’s typical of Remainer campaigners and you should be quite ashamed, I’m afraid.”

Earlier in the show, Rees-Mogg said the idea floated by Boris Johnson’s opponents of ousting him as Prime Minister and installing a government of national unity led by Ken Clarke would “blow a raspberry” at Leave voters.

Asked if CCHQ was planning for an early general election, he said: “I think any wise party always prepares for an election. Certainly in my own association, once we have had an election I begin muttering about: ‘When are we getting prepared for the next one?’

You can watch the full jaw-dropping Rees-Mogg Q+A here: