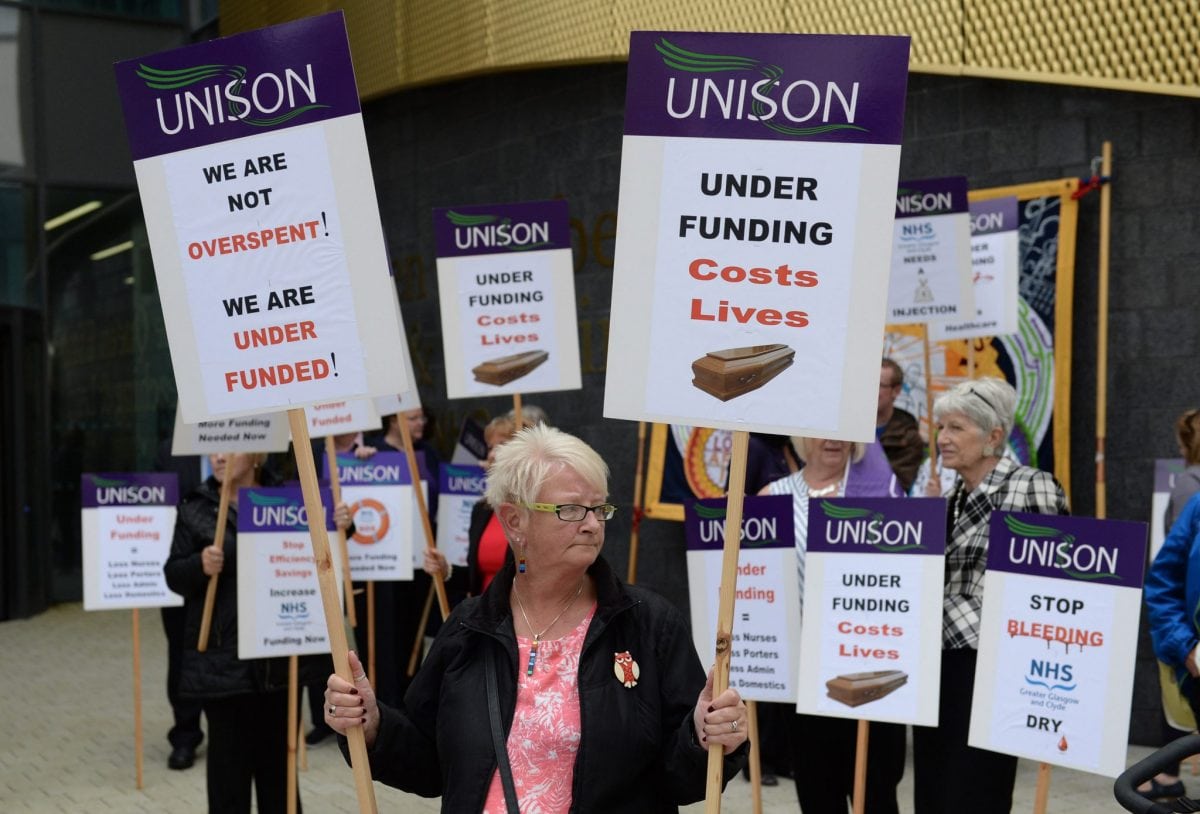 Members of Unison and other NHS campaigners protest outside The Queen Elizabeth Hospital ahead of a meeting of NHS Greater Glasgow and Clyde annual board meeting. August 4, 2016. The protesters are blaming the authority for a number of cuts to services.

There has been a huge rise in the number of NHS patients enduring trolley waits during the summer months, new data shows, with NHS stats worse than during the winter crisis.

Trolley waits refer to the time A&E patients spend on trolleys or chairs while a bed is found for them.

New figures from NHS England show that, in May and June, 119,320 patients endured a trolley wait of more than four hours.

It is also almost treble the number of four years ago, when there were 42,589 trolley waits in May and June 2015.

There were 528,808 emergency admissions in June, 3% higher than the same month last year.

The data also showed record numbers of NHS patients waiting for planned treatment such as hip operations, with 245,079 forced to wait longer than six months.

Figures for May show that 87% of patients were treated within 18 weeks – below the target of 92%.

A record 4.39 million people were waiting for treatment, estimated to be 4.5 million when all trust data is taken into account.

“Patients will find it staggering that this summer A&E performance so far has actually been worse than it was in the run up to Christmas and those stranded on trolleys in overcrowded hospitals is up 376% compared to last June.

“What’s more, the waiting list for treatment is at a record high with patients waiting longer in pain and distress for treatment.

“This is an NHS in a year round crisis thanks to years of cutbacks and understaffing. The Health Secretary must park his obsession with gimmicks, gizmos and gadgets and get a grip of the plummeting standards of patient care happening on his watch.”

The data also showed that just three major A&E departments met the target to treat or discharge patients within four hours in June.

Some 22.5% of people also waited longer than two months between an urgent GP referral and a first treatment for cancer.

The 62-day target has not been met for nearly three-and-a-half years.

Jessica Morris, research analyst at the Nuffield Trust, said: “The high number of trolley waits this summer is a sign of the ever-increasing pressure that hospitals are under.

“The number of patients waiting over 12 hours to be admitted on to a ward were higher in June than in December last year.

“In terms of performance, summer is becoming the new winter.

“Trolley waits are always a real concern, because these are patients who doctors have decided need to be admitted in an emergency.

“Sadly, after many years of scarce resources, staff are often facing situations where the beds are not available for patients when they need them.”

RCS president Professor Derek Alderson said the first step must be to tackle the NHS pensions crisis, which is seeing consultants turn down extra shifts due to fears of hefty tax bills.

He said: “Surgeons up and down the country have raised concerns that waiting times for planned operations continue to grow.

“It is ludicrous that senior doctors who volunteer to do additional shifts on top of their regular jobs to help reduce NHS waiting lists run the risk of receiving a crippling and unpredictable tax bill.

“We urge both candidates hoping to become our next prime minister to commit to helping us clear the backlog of patients stuck on waiting lists.

“It’s unacceptable that a record number of people are waiting more than six months for their operation.

“The warmer months are traditionally when the NHS is able to reduce the backlog of patients waiting for operations, so it is imperative we sort this out quickly, before winter arrives and hospital admissions increase again.”

The data does show improvement on long waits of more than a year.

Miriam Deakin, director of policy and strategy at NHS Providers, said: “Historically, the summer months have been a time of year when the NHS could catch its breath and recover performance following high demand over the winter.

“The monthly performance figures, including those released today, show that this is no longer the case.”

He added: “This is meant to be the time when services are least stretched and staff have an opportunity to draw breath but the numbers are staggering – more than 17,500 people needing emergency admission every day in June, with a 5% increase in 12 months, and the number of patients “stuck” in acute beds is identical to to this time last year (4,500).”

“Local areas across the NHS are now reviewing the extra staffing and capital investment in facilities and diagnostics they will need for the next five years, ahead of national decisions on these later this year.”