The UK is now solving its HGV crisis by employing offenders who used lorries to import drugs. 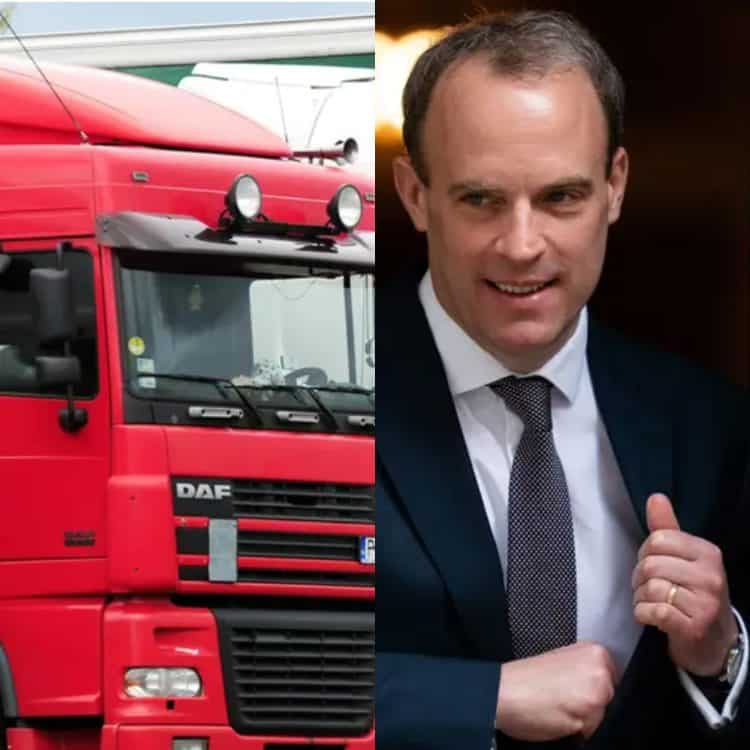 A prisoner drafted in to help ease the UK’s lorry driver shortage has sparked hilarity, after it emerged that his crime was importing drugs… using a lorry.

An ITV News report covered plans by Dominic Raab, the justice secretary, to use offenders to ease the country’s severe labour shortages.

A man filming the TV screen from home can be heard prompting newsreader Mary Nightingale to “go on” as she was introducing the story, followed by consumer editor Chris Choi introducing a man called Dean.

“Here we go,” said the person filming from home.

At this point, Choi can be heard saying: “Behind the wheel was Dean. He’s on day release from jail, working in haulage.

“His offence was importing drugs involving a lorry.”

The person filming burst into laughter due to the irony behind someone committing a crime involving a lorry helping the government by driving one.

Raab insisted in a longer version of the clip that the move will help the UK to be more “self-reliant” whilst also being “good for the economy and the society”.

He also told LBC: “I say to the critics, look, I can demonstrate it works, this is making your community and the public safer – this is just win-win. It’s smart policy and it’s smart politics.”

But the Recruitment and Employment Confederation said Britain needs around 100,000 HGV drivers and that there are not enough prisoners to fill all the vacancies that currently need filling.

The move is part of a series of desperate government attempts to tackle worker shortages, exacerbated by Brexit and the pandemic – from releasing temporary visas for EU lorry drivers, to asking undocumented migrants, ambulance drivers, motorhome owners, German citizens in the UK and even retirees to jump in and take the jobs.

Initially, the government tried to tackle the shortages by simplifying lorry driving tests and allowing companies to ask employees to work longer hours – but both measures sparked safety concerns.

A Romanian lorry driver who has been working in the UK for the past nine months, having previously worked in Britain six years ago, told The London Economic why he is thinking of following in the footsteps of his colleagues and move home to work across Europe.

Speaking to TLE, Viorel Alexandru Onu said his previous work conditions in the EU were “better than the ones he has in the UK”.

His views were echoed by Polish lorry driver Tomasz Oryński, who said Eastern Europeans, who were a “significant part of UK’s lorry drivers” left the country because of bureaucracy caused by Brexit –  and went to EU countries, “where being a truck driver is still an attractive job.”