“My brother-in-law worked as a lorry driver up until this Saturday, he resigned. A lot of my friends who are lorry drivers left the UK as soon as the new Brexit rules came into place.” 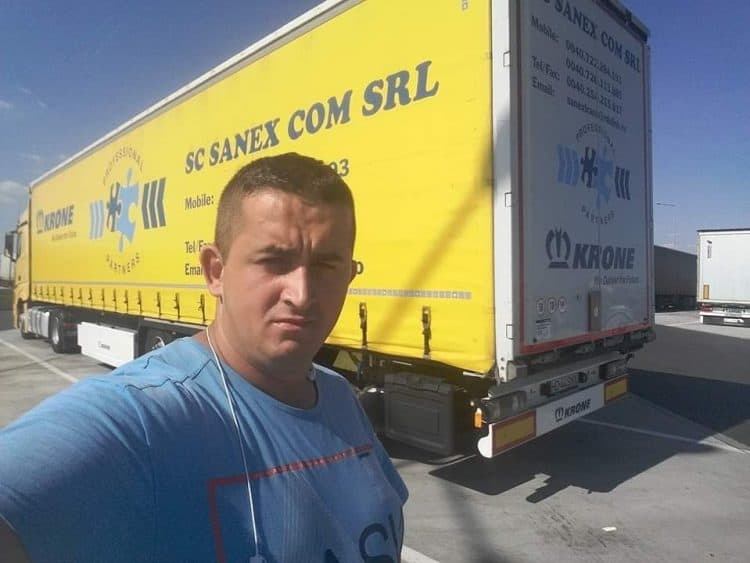 A lorry driver has explained why he is thinking of following in the footsteps of his colleagues and moving back to Romania to work across Europe.

Viorel Alexandru Onu used to work as a lorry driver across the continent for a firm in his native Transylvania, Romania. He was working six weeks at a time followed by two weeks off at home, and used to sleep in the lorry cabin until an EU law meant he had to rest for 45 hours in a hotel room every week.

He thinks his previous work conditions were better than the ones he has in the UK. “I don’t currently have time for anything else,” he said.

He has been working as a lorry driver in the UK for nine months, having previously worked in Britain six years ago, and has delivered a variety of goods, including for supermarkets.

“I have been thinking of going back to Romania and working across the whole of Europe again because of what I am left with here versus there”, Onu told The London Economic.

He added: “Here you pay rent, bills, car insurance, fuel and so on, there you only spend money on food.

“There is a difference between food prices in the UK six years ago when I worked here versus food prices now. Back then, I could live on £40 for a week, now I spend up to £120 per week so the costs are three times higher. Fuel prices have increased as well over the past nine months.”

Onu said being a lorry driver requires sacrifices and is not “necessarily a pleasure to do”.

He added there is now more risk, tiredness and pressure on lorry drivers delivering to UK supermarkets, because they are expected to cover for Brexit-related drivers shortages under even longer working hours approved by the government.

“I think those who focus on delivering goods for supermarkets experience higher stress to do as many deliveries as possible; and to do the same deliveries with the same lorry drivers to make up for the shortages.

“I think that means more tiredness and lack of sleep which can result in accidents.”

Onu told TLE that before Brexit he could finish work after 10-12 hours, but drivers can now work up until 15 hours three times a week, after which they can work a maximum of 13 hours.

He said: “I don’t have time to give to my girlfriend anymore, and not having the possibility to spend time together as much as possible brings all sorts of problems.

“After 15 hours of work, you get home, you shower, you eat and go to bed. In the morning I start work at 5, I have to leave for work, it’s quite bad.”

Onu added his brother-in-law worked as a lorry driver in the UK up until last Saturday, but resigned because of the working hours.

“He was starting work for supermarkets between 10pm and 1am. It was tiring, you can get home around 12 noon the next day or work up to 15 hours, and you can’t really sleep during day time, it’s not the same as a night sleep,” Onu said.

Onu said there is a “strong” shortage of lorry drivers which means supermarket shelves “started being quite empty”.

But he thinks the government prolonging working hours for existing drivers will not help with deliveries after 100,000 UK lorry drivers left their jobs.

And he thinks companies paying bigger salaries for less drivers to do as many deliveries as possible will not help either.

“If you pay better salaries, you attract existing drivers from other companies, but those companies then have drivers shortages and it’s the same thing.”

Under the new Brexit rules, lorry drivers cannot be recruited from the EU anymore because of a government focus on high-skilled workers who can speak English well, among other conditions.

But Onu thinks a lot of the current problems with lorry drivers and supermarket shortages stem from Brexit rules.

He said: “Primarily, lorry drivers in the UK were Romanian, Polish and Lithuanian. A lot of my acquaintances who are lorry drivers have left the UK, as soon as the new Brexit rules came into place. I know of around 10 drivers from my group of friends who went back to Romania completely, and other drivers changed their jobs.

“Before, there were people who were coming to the UK speaking very little English but they were managing. When I first came here I couldn’t speak English almost at all, but by working in the field I started knowing the basic things, especially the ones related to the job.”

He said Brexit also means he now gets taxed 25 per cent every week, which leads to “quite a big difference” in his income.

“Before, you were paying the taxes at the end of the year and you were able to claim money for fuel, expenses, work clothes. Now I have a friend who was earning £1,350 and ended up earning £940,” he said.