His comments come as Tory MPs voted to allow water companies to dump raw sewage into Britain's rivers and seas. 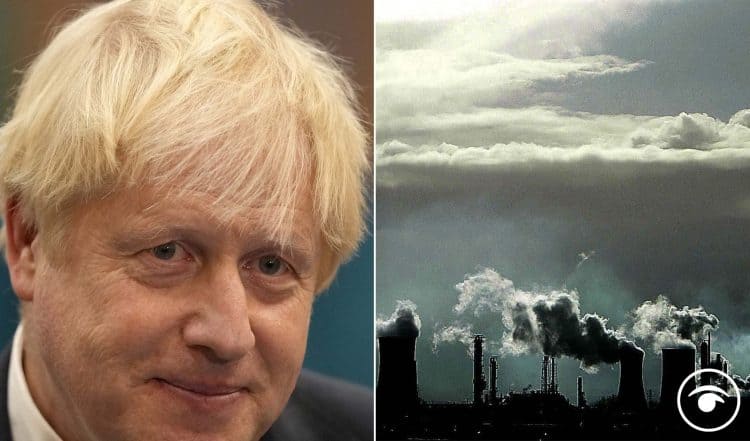 Boris Johnson admitted he fears the major international climate change summit he will host from Sunday could fail to make the progress needed. It comes as levels of planet-warming greenhouse gases in the atmosphere reached record highs again last year,

The Prime Minister will welcome world leaders to Glasgow for the United Nations Cop26 summit but said it was “touch and go” whether key goals would be met.

“We need as many people as possible to go to net zero so that they are not producing too much carbon dioxide by the middle of the century,” he said.

“Now, I think it can be done. It’s going to be very, very tough, this summit.

“And I’m very worried, because it might go wrong and we might not get the agreements that we need.

Mr Johnson said “peer pressure” at the UN summit could force some nations into action.

But with some major world leaders including China’s Xi Jinping expected to stay away due to the state of the coronavirus pandemic the chances of that tactic being a success may be limited.

Concentrations of carbon dioxide and other heat-trapping gases in the atmosphere rose at a faster rate in 2020 than over the previous decade, and the trend has continued in 2021, the UN’s World Meteorological Organisation (WMO) said.

The economic slowdown caused by the Covid-19 pandemic did not have any discernible impact on atmospheric levels of greenhouse gases and the rate they are building up – although there was a temporary decline in new emissions, the WMO said.

If greenhouse gas concentrations continue to increase at current rates, the world will see temperature rises far above globally agreed long-term targets to limit warming to 1.5C to 2C to avoid the worst impacts of climate change.

Greenhouse gases are emitted by human activities such as burning fossil fuels for power, heating and transport, farming and deforestation, and they build up in the atmosphere where higher concentrations of the gases trap more heat, causing rising temperatures, extreme weather and rising seas.

The last time the Earth had similar concentrations of carbon dioxide (CO2) in the atmosphere was three to five million years ago when the temperature was 2C-3C warmer than now, and sea levels were 10-20 metres higher – but there weren’t 7.8 billion people living on the planet then, he warned.

Prof Taalas said: “Many countries are now setting carbon neutral targets and it is hoped that Cop26 will see a dramatic increase in commitments.

“We need to transform our commitment into action that will have an impact on the gases that drive climate change.

“We need to revisit our industrial, energy and transport systems and whole way of life.

“The needed changes are economically affordable and technically possible. There is no time to lose.”