"Probably the only time I shall agree with Priti Patel," tweeted Peter Stefanovic. 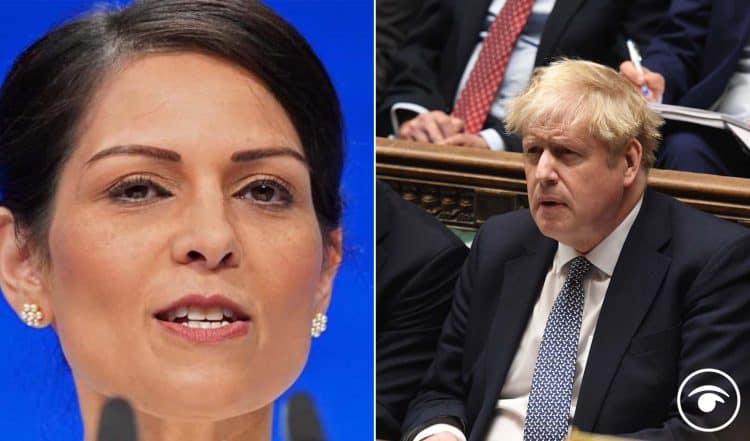 It comes as cabinet minister Brandon Lewis urged people to wait for the outcome of an inquiry by senior civil servant Sue Gray into alleged lockdown-busting parties in No 10 and Whitehall before making judgments on the prime minister’s future.

“The Prime Minister has outlined that he doesn’t believe that he has done anything outside the rules. If you look at what the investigation finds, people will be able to take their own view of that at the time,” he said.

Cabinet ministers rallied round to defend Mr Johnson, but the late interventions of foreign secretary Liz Truss and chancellor Rishi Sunak – both tipped as potential successors – did little to instil confidence in his future.

While Mr Johnson endured a difficult session of Prime Minister’s Questions on Wednesday, Mr Sunak had notably spent the day away from London on a visit in Devon.

Mr Lewis insisted Mr Johnson was the right person to be Prime Minister and “I think we will be able to go forward and win a general election”.

Patel also appeared to back the PM.

Mirror reporter Pippa Crerar tweeted: “Home Sec Priti Patel returning the PM’s loyalty to her during the bullying row by going out to bat for him in a rare appearance on the Tory MPs’ WhatsApp group…”

However, people on Twitter were quick to spot a reweeted message from her account from January 2021, not too long before the ‘work event’ in the Downing Street garden.

Patel had retweeted a clip from the Met showing police officers breaking up an illegal rave in Hackney, East London, during lockdown.

She wrote: “This illegal gathering was an insult to those hospitalised with Covid, our NHS staff and everyone staying at home to protect them.

“Thank you to @MetPoliceUK officers for risking your own health to break it up. Police are enforcing the rules to save lives.”

It wasn’t long before people were pointing out the hypocrisy of her comments.