"He's currently texting donors asking if anyone can lend him fifty quid." 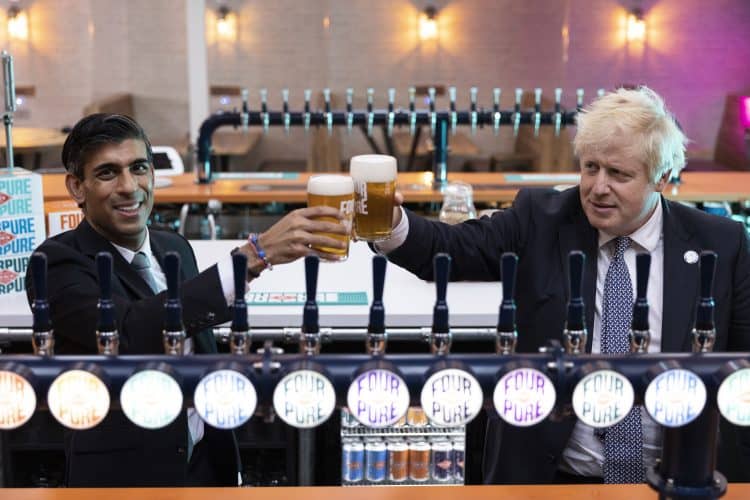 Scotland’s first minister has said both the prime minister and chancellor should resign after receiving fines over parties being held in Downing Street.

The Metropolitan Police said on Tuesday that at least 30 more fines were issued over the partygate saga, with a spokesman for Number 10 confirming both Boris Johnson and Rishi Sunak were among the recipients.

Bereaved families have said there is “simply no way” the Prime Minister and Chancellor can continue in their posts, after they were told they will be fined as part of a police probe into allegations of lockdown parties held at Downing Street.

The Covid-19 Bereaved Families for Justice group called for Boris Johnson and Rishi Sunak to step down after their “truly shameless” behaviour.

Lobby Akinnola, spokesman for the group, said it is “unbelievably painful” to know that the PM was breaking his own lockdown rules while families were cut off from their dying loved ones because they followed them.

Inevitably, calls for their resignations swelled in the hours after the announcement, with Nicola Sturgeon among those calling for them to step down.

On Twitter, the first minister said: “Boris Johnson must resign. He broke the law and repeatedly lied to parliament about it.

“The basic values of integrity and decency – essential to the proper working of any parliamentary democracy – demand that he go.

“And he should take his out of touch Chancellor with him.”

Ms Sturgeon’s deputy John Swinney added: “The prime minister broke the law he put in place. He must resign.”

Here are some of the best reactions to the fines:

Related: PM and Sunak both slapped with fine for breaking law during lockdown