Papers: ‘For heaven’s sake – DO SOMETHING’ – Fury at lack of govt action over cost of living crisis

Britain’s ‘winter catastrophe of rising energy bills’ is the story consuming Saturday’s front pages, as the cuntry faces a bleak end of year. 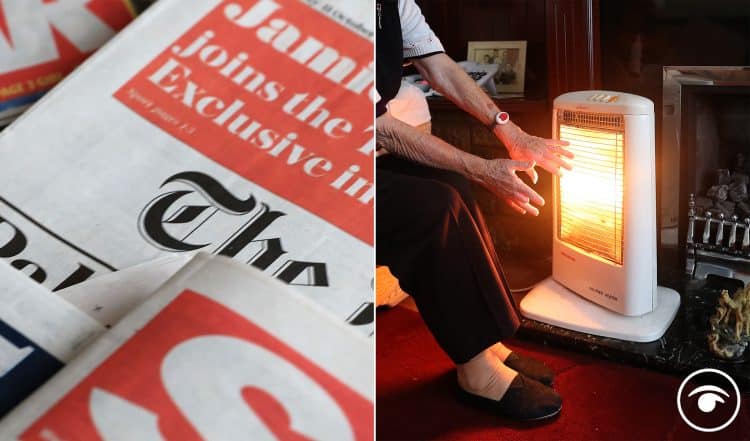 The Chancellor has suggested those earning around £45,000 annually could struggle to cope with soaring living costs as households prepare for another painful price hike over the winter.

Nadhim Zahawi said things will be “really hard” for middle-earners, as well as society’s most vulnerable, as the energy price cap is set to rise by 80% by October, pushing the average household’s yearly bill up from £1,971 to £3,549.

Industry regulator Ofgem warned the Government it must act urgently to “match the scale of the crisis we have before us” as Britain faced the bleak news on Friday.

With this at the forefront of everyone’s minds, the newspapers have focused on the financial storm ahead.

The newspapers are dominated by the 80.06% rise in the energy price cap for around 24 million households, sending the average household’s yearly bill from £1,971 to £3,549.

The Independent covers the news by saying Britain is facing a “dark winter ahead”.

FT Weekend adds the leap will send millions into poverty.

The Guardian covers the “winter catastrophe of rising energy bills” with an ominous warning from consumer champion Martin Lewis that “lives will be lost” as he condemned inaction by ministers.

The Daily Mail has more warnings for consumers – with economists telling the paper up to six million Brits could have their savings completely wiped out by the increase.

The Daily Telegraph‘s splash features an interview with the Chancellor in which he says the middle class will also need help to cover their energy bills.

The Daily Mirror carries a message to leaders over the energy bills crisis, telling them: “For heaven’s sake, do something.”

The Daily Express offers up a promise from the outgoing PM, Boris Johnson, that a “pipeline of cash” is on the way to help struggling families.

Tory frontrunner Liz Truss has done a “U-turn on energy handout”, reports i Weekend, but it adds six million will still lose their savings.

And the Daily Star has Ozzy Osbourne claiming his Hollywood home is haunted.