“These are the UK’s equivalent of the rainforests in terms of both their nature and their storage of carbon.” 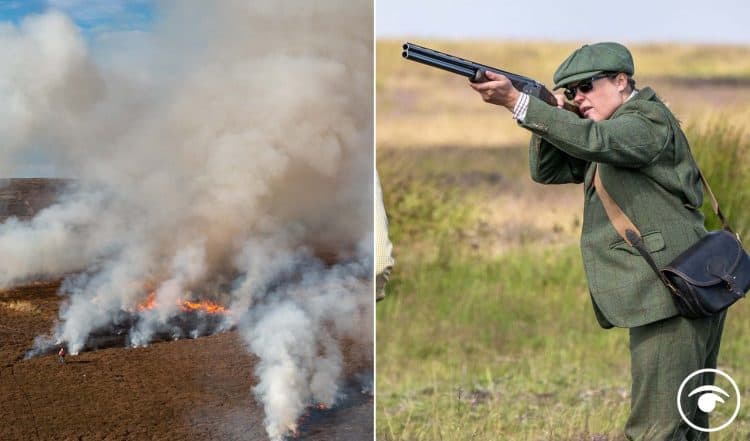 Conservationists have renewed calls for a total ban on burning carbon-rich peatland, as moorland fires are set in the run-up to Cop26 climate talks.

More than 100 fires were reported on upland moors in Northern England, largely in national parks, in the past few days by campaign group Wild Moors and Greenpeace’s investigative journalism team, Unearthed.

The RSPB has also raised concerns over potential illegal peat burning, and said it was “outrageous” the fires were going ahead in the run-up to the Cop26 climate talks taking place at the end of the month in Glasgow.

Grouse moor managers carry out controlled burning of heather on peatland during winter months to stimulate new growth of the plants which red grouse can feed on, and say their methods do not harm the peat below.

But conservationists say burning peatland destroys vegetation, erodes the carbon-storing peat and reduces its ability to slow the flow of water and prevent flooding in the valleys below.

In England, the Environment Department (Defra) has brought in a ban on burning on blanket bog with deep peat, more than 40cm in depth, in specially protected areas, without a licence.

The Government said there was consensus that burning of vegetation on blanket bog was damaging to peatland formation and the condition of the habitat, and made it more difficult or impossible to restore them to their natural state.

But environmental groups say the ban covers less than a third of upland peat and has loopholes that could allow burning to still go ahead there.

They have called on the Government to widen the prohibition on burning to cover all upland peatland in England.

Luke Steele, executive director of Wild Moors, said there had been a surge in burning this year and said: “It’s illogical to keep this outdated, intensive and environmentally-destructive practice afloat for the sake of a cohort of unscrupulous grouse moors who can’t break their burning habit.”

Kate Blagojevic, Greenpeace UK’s head of climate, said: “Just days before the UK is due to host a major climate summit, our largest terrestrial carbon store is on fire.”

She called for a comprehensive and immediate ban, adding: “There are better ways to welcome world leaders to a crucial climate summit than the sight of smoke and flames engulfing our largest carbon store.”

Amanda Anderson, director of the Moorland Association, defended the practice of heather burning, which is permitted between October and April on shallow peat and “in very exceptional circumstances” on deeper peat, as a legal and regulated land management tool.

UK’s equivalent of the rainforests

She said there was no evidence that any legislation had been contravened, and added: “Burning is only undertaken in the right place, at the right time and for the right reason.

“Controlled burning does not damage peatland as the technique burns the heather but not the peat below it.”

She also said the vast majority of emissions from peat came from lowland peatlands and added: “Moor owners are committed to playing their part in tackling climate change and have already achieved significant gains towards climate change targets in terms of peatland restoration.”

But the RSPB’s senior policy officer, Dr Pat Thompson, said the practice needed to stop, warning: “Each burn on peatland destroys crucial vegetation and exposes the surface of the peat itself.

“This leads to erosion both as the carbon in the peat is released into the atmosphere or is carried off into our rivers, causing pollution.

“It’s outrageous that in the run-up to the UK hosting Cop26 in Glasgow we are watching our peatlands burn.

“These are the UK’s equivalent of the rainforests in terms of both their nature and their storage of carbon,” Dr Thompson added.