Images of Valentyna Konstantynovska, 79, appeared across western media today, much to the bemusement of sources closer to the ground. 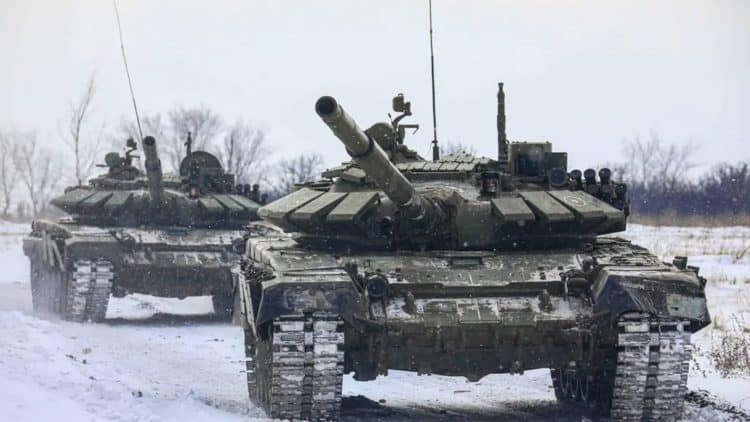 A photo plastered across UK media to illustrate the Ukraine-Russia conflict was organised by a neo-Nazi group, it has emerged.

The Daily Telegraph and The Times both put a photo of Valentyna Konstantynovska, 79, on their front pages today, whilst the woman was receiving combat training in the east of Ukraine.

The woman also appeared in the Daily Mail and ITV News – both online and on TV –  prompting Mark Ames, previously an American journalist in Moscow for 11 years, to point out the photo opportunity was “organised by the neo-Nazi Azov Battalion”.

The Battalion is a Ukrainian National Guard unit – as reported in a caption by the Irish Times and by trustworthy Czech publication iRozhlas.

He later tweeted: “It’s fascinating, as they say, how an Azov-Nazi Granny propaganda photo op managed to slip past the vast billion-dollar network of US-UK disinformation-fighting NGOs, media fact-checkers, online Nazi hunters, Bellingcats etc, all supposedly set up to protect us from exactly this.”

French media company Euronews did not shy away from reporting on the far-right training by picturing the elderly woman either.

A video leading with Konstantynovska’s image shows Ukrainian civilians including the woman being overseen by men wearing coats with the Nazi Wolfsangel symbol on them.

The revelations that the training was provided by a neo-nazi group have sparked hundreds of reactions, with British broadcaster Afshin Rattansi asking: “British newspapers now openly promoting neo-Nazis?”

One Twitter user drew a comparison between Nazi Germany ahead of the Second World War and the neo-Nazi group in Ukraine as tensions between Russia and Ukraine are rising.

“Liberals looking at France and UK in the 30s saying ‘a strong Germany will be a bulwark against Russia’ and thinking ‘good idea, can’t see anything wrong with that’,” he said.

‘Friendly to neo-Nazis and inspired by France’s new right’

In 2019, Foreign Policy was describing Ukraine’s Azov movement as “hostile to Russia, friendly to neo-Nazis, and inspired by France’s new right”.

The publication wrote at the time that the movement was set up in 2014 to support Ukraine’s defence in front of Russian-led proxy forces.

Among the Ukrainian group’s victories was the recapturing of the Ukrainian city Mariupol, where Konstantynovska received the training.

But the victories earned it a reputation as “a place where far-right extremists and self-confessed neo-Nazis could make themselves at home”, FP concluded.