“So a right wing tabloid newspaper has completely misrepresented the truth? Welcome to our world for the last 30 years. It's how Brexit happened," a communications professor has said. 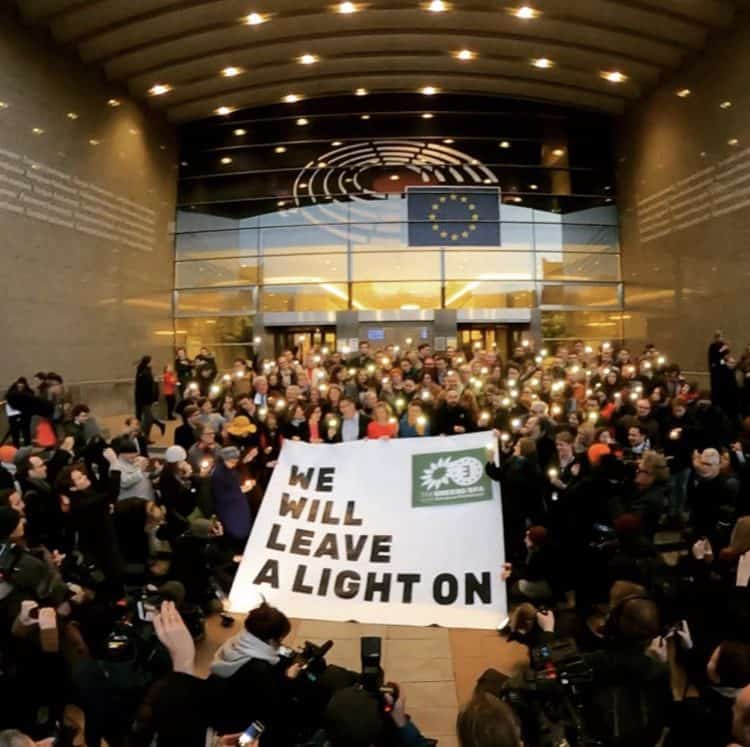 The Express has faced a backlash after portraying an EU politician missing the UK’s membership as an “extraordinary Brexit attack”.

The newspaper described Terry Reintke, vice-president for the Greens-European Free Alliance (EFA), as a “German feminist” – despite her nationality and beliefs not having any obvious relevance to her Brexit stance.

It comes after Reintke said: “I have to admit: It has been very hard to watch what has been happening in the UK – especially in the last months.

“So I thought it would be nice to send over some love and strength. There are still so many of us who truly miss you.”

“We will leave a light on”

In the photo she shared, dozens of people can be seen gathered around a poster reading “We will leave a light on” whilst holding flashlights.

But the Express highlighted one comment pointing out “leaving a light on is not very green” shows “typical British sense of humour fashion”.

Overwhelmed by the support, a day later, Reintke added: “Thank you for all the wonderful responses. I will tell my colleagues in the European Parliament about it.

“The picture was taken during an action right before we voted on the Withdrawal Agreement in the Parliament.”

But the Express was not impressed by Reintke’s support, saying “none showed any support for Brexit” and the “vast majority” thanked the politician for her support.

It continued: “Many even claim they were brought to tears by the gesture.

“Since leaving the bloc, post-Brexit Britain has seen a string of victories for the nation that would not have been deemed possible under strict EU bureaucracy and rules.”

Diverting from the UK-EU focus, the Express then tried to point out many Eastern European nations are concerned about equality within the trading block, arguing Western Europe is “treated more favourably in terms of socio-economic and political sway from Brussels”.

Seeing the string of attacks made in the newspaper, Reintke seemed forced to clarify her position on Sunday.

She said: “Just to avoid any misunderstanding:

“I am not ‘gloating‘. I am genuinely sad. I thought that was obvious.

“And the tweet was not an ‘attack‘. I love the UK. And the way I see it, Brexit has been damaging to the UK and many people in the UK I deeply care for.”

Reactions poured in in support of the EU politician, whilst hitting out at the British newspaper.

Westminster University communications professor Steven Barnett: “So a right wing tabloid newspaper has completely misrepresented the truth? Welcome to our world for the last 30 years. It’s how Brexit happened.”

One Twitter user said: “Many of us in the UK are thankful that politicians like Terry Reintke are still supportive of the UK and Rejoin EU. We need all the European friends we can get. So, thank you Terry.”

Another added: “All the bigotry on display. ‘GERMAN feminist etc…’ Something needs to be done about the British ‘press’!”

“A light shining from Europe is our only comfort & hope in the black storm that has enveloped the UK,” a third concluded.

Reactions: Eastern European who left UK in 2012: ‘My experience made me predict Brexit’