Almost as bad as the time he suggested you can grow concrete. 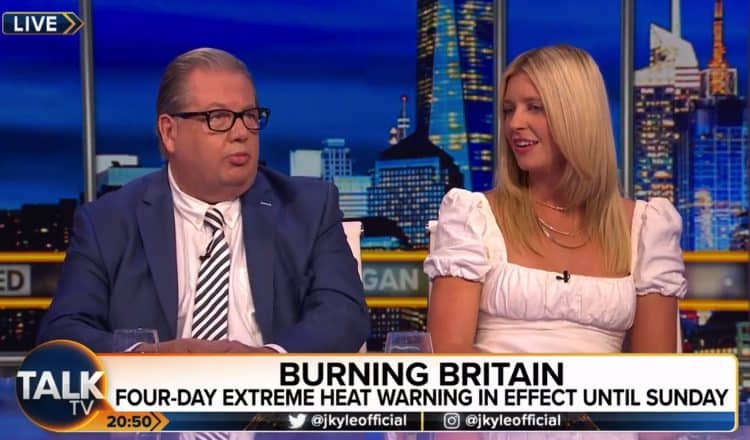 Mike Graham has surpassed himself with comments about the recent water shortages.

The UK has seen temperatures as high as 35C this weekend, amid wildfires, drought, and thunderstorms.

It comes as the southern half of the UK has been beset by drought conditions this weekend, while the northern half braces for thunderstorms on Sunday.

An amber heat warning has been issued by the Met Office.

This means heat-related illnesses including sunburn and heat exhaustion are “likely” among the general population, and delays to public transport are “possible”.

An official drought was declared in eight areas of England on Friday by the National Drought Group (NDG), which comprises representatives from the Government, water companies, the Environment Agency (EA) and others.

England’s drought could persist into the next year, according to the EA.

John Curtin, executive director for local operations at the EA, said that after the driest summer in 50 years, it would take “weeks’ worth of rain” to replenish water sources.

Three water companies, Welsh Water, Southern Water, and South East Water, have all imposed hosepipe bans, while Yorkshire Water has announced a ban will start on August 26 and Thames Water is planning one in the coming weeks.

Talking on Piers Morgan’s Uncensored show, Mike Graham came up with a novel solution for curtailing the shortgages.

“We’re surrounded by water… if I was running things, I’d figure out a way of getting a hose into the sea and putting it into the land”, he said.

Last year Graham was the target of ridicule after he suggested concrete grows on trees.

The TalkRadio host sparked bemusement for his interview with Insulate activist Cameron Ford – in which he quizzed the environmentalist on how “safe” his job is for the planet.

Ford – a carpenter – explained that he works for a sustainable building practice, telling Graham: “Wood is regenerative, you can grow trees. You can’t grow concrete.”

But Graham was not to be beaten, responding: “Yes you can.”