The man dressed as a broccoli floret was arrested on Sunday as part of environmental protests, carrying a sign reading: ‘I’m locally sourced and environmentally friendly.’ 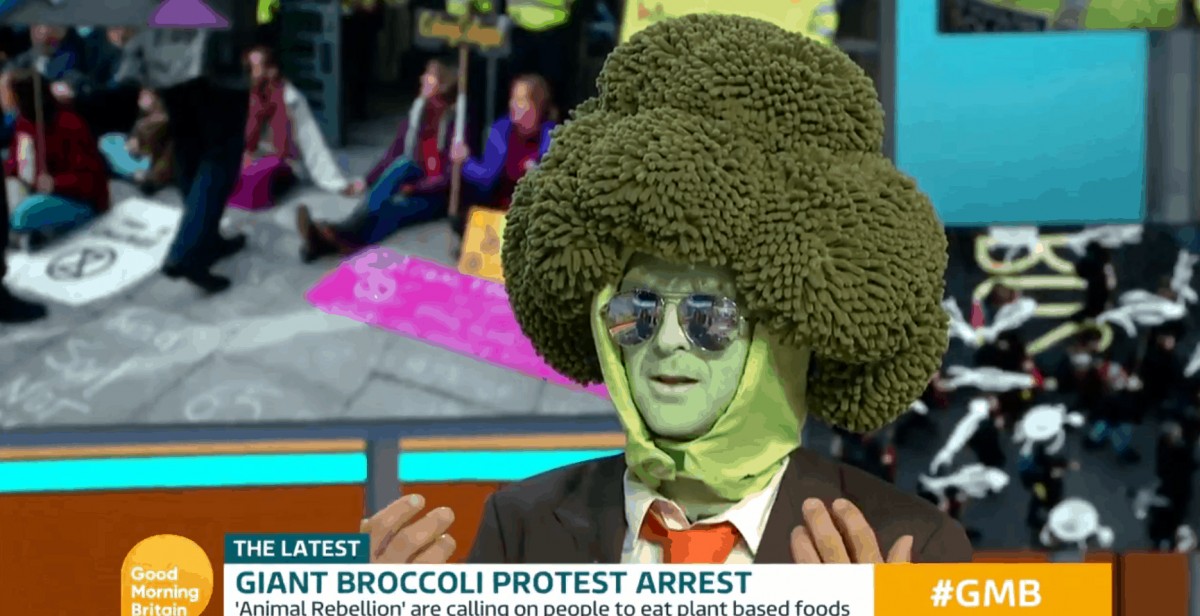 As the Met bans Extinction Rebellion protests from London, arrests have mounted, including as we reported earlier this week, that of a man dressed as a broccoli floret.

When the leguminous costumed protestor detained carrying a sign reading: ‘I’m locally sourced and environmentally friendly’ was invited on Good Morning Britain on Wednesday his TV appearance was less than friendly.

‘Mr Broccoli’ went viral on social media when he got in hot water and was accused of being a “plant” for the meat industry by Good Morning Britain’s Susanna Reid.

The man, who refused to give any other name beyond Mr Broccoli, warned the planet was “in incredibly hot water” as a result of climate change but was scolded by Reid and co-host Piers Morgan for being evasive in his answers.

Morgan reached boiling point as the floret-featured guest kept calling him ‘peas’ instead of ‘Piers.’

He is part of the Animal Rebellion movement, an offshoot of climate group Extinction Rebellion, and was arrested on Sunday as part of the environmental protests in London.

Mr Broccoli appeared on the show in green face-paint and a broccoli floret-style head-dress to promote a plant-based diet.

Morgan, who the guest kept referring to as “peas” rather than Piers, was not impressed by the protester, saying: “You don’t know the science.”

The man replied: “I’m just a broccoli at the end of the day.”

Mr Broccoli then picked up a banana and held it to his ear, pretending he had “a call”.

Referencing climate protests, he said: “I want people to feel like they can come and take part in this protest.”

During the interview, Reid asked: “Can I just ask a straight-forward question and without any comedy – are you a plant?

“As is, because your argument dressed as a broccoli just strikes me as so absurd that you’re wearing a costume but you’re trying to get a serious point across about veganism.

“Are you actually not part of Animal Rebellion and Extinction Rebellion at all but somebody who is trying to send up the whole movement?”

The protester replied: “Not at all.”

When a “really cross” Reid asked if his appearance was a “joke”, he said: “I think given the gravity of the situation, some levity and humour is important.”

At one point, Morgan branded the man an “idiot” and Reid later said: “I think they’re a plant from the meat industry.”

Viewers reacted to the interview using the hashtag #MrBroccoli, with some more keen on the vegetable-themed protester than others.

Twitter user Joe Rush said that the interview was the “best thing” he had seen on television.

Elliott Wright of The Only Way Is Essex said that Mr Broccoli was a “moron”, and that show host Piers Morgan should have “served him up on a plate”.

Many social media users agreed that watching the segment was a strange way to wake up in the morning, with one saying: “What in the hell is going on here?”

Asked about his arrest, a spokeswoman for the Metropolitan Police said they could not comment on individual arrest cases.

More than 1,400 people have already been arrested in the protests, part of an “international rebellion” with action taking place in cities around the world.

Extinction Rebellion are appealing a London-wide ban by the Metropolitan police as they say it criminalises protest.