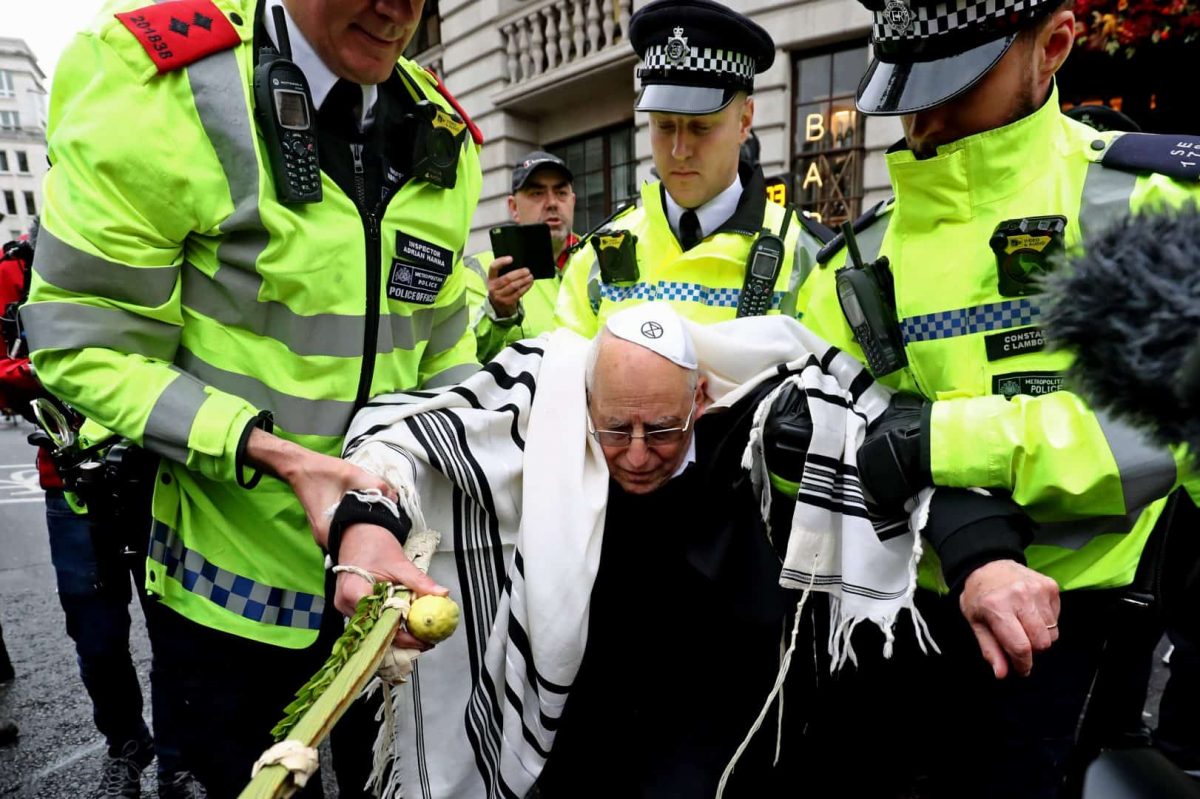 A rabbi has been arrested after kneeling and praying in the middle of the road as part of the Extinction Rebellion protests in London.

Rabbi Emeritus of Finchley Reform Synagogue, north London, Jeffrey Newman, who was accompanied by around 30 Jewish activists, was arrested at around midday on Monday in the middle of a busy junction at Bank in central London.

They joined climate change activists from Extinction Rebellion who have been obstructing five roads since 7am. Rabbi Newman was arrested as the total arrests passed 1,400 people after a week of protests.

The 77-year-old, who was wearing a white kippah (yarmulke or skullcap) branded with the black Extinction Rebellion logo, said: “I see it as my religious and moral duty to stand up for what I believe in, and what I care about, for my grandchildren.

“I haven’t tried to involve the synagogue, because if you are asking for permission, you might not get it.

“I think it’s much more important to do what I’m doing, and they can approve or not approve at a later date.”

Mr Newman, who is also the adviser to the International Secretariat of the United Nations’ Earth Charter, a set of 16 principles for a sustainable global society, said he has been involved with global environmental movements for around 50 years.

The rabbi, carrying a lulav palm frond and etrog yellow citrus which protesters said symbolise human connection with the earth in Judaism, said: “This has been something that I have been involved with since the 60s.

“I am trying to get the Jewish community engaged with these issues.

“Many of the younger people, the activists, have not had anything to do with the Jewish community for a long time.

“And for the first time, they have discovered that there is a potential for meaning within Judaism, because of its connection with issues that they really are concerned about.

“I think this is phenomenal.”

They circled the police van where Mr Newman was taken, waving banners and shouting about how the rabbi had been arrested to passers-by.

‘Financing for fossil fuels increased every year since the Paris Agreement’

“Since 7am we have shut the roads outside the Bank Of England in the City of London. Financing for fossil fuels increased every year since the Paris Agreement,” said a statement by Extinction Rebellion. “33 banks financed fossil fuels with $1.9 trillion since Paris with $600 billion funding aggressive fossil fuel expansion”

1,400 arrests as climate activists storm the city of London

Extinction Rebellion activists have brought disruption to the City of London as the number of arrests topped 1,400 over a week of protests.

Hundreds of protesters spent the day blocking the crossroads at Bank station, outside the Bank of England.

They held banners and placards bearing messages targeting financial institutions and investment in fossil fuels, such as “divest from climate change” and “invest in soil not oil”.

They also blocked the crossroads outside Monument station after marching from Bank, stopping traffic for a time at the junction.

The Metropolitan Police said that more than 1,400 people had been arrested in connection with the Extinction Rebellion protests, which kicked off last Monday with activists shutting down the roads around Parliament and Whitehall before targeting City Airport on Thursday.

Some 76 people have been charged with offences including failing to comply with a condition under the Public Order Act 1986, criminal damage and obstruction of a highway, the Met Police said.

Among the activists at Bank was Dave Evans, 32, an IT consultant from London, said he had taken two weeks’ unpaid leave to join the protests.

He said the finance sector needs to “stop funding the climate crisis”.

“These huge corporations are financing fossil fuels and (are) being subsidised by the Government,” he added.

Activists holding the junction were joined by the “red brigade” – Extinction Rebellion protesters dressed in red cloaks and veils with white painted faces – and a yoga session was held at the crossroads.

The protests form part of an “international rebellion” with protests in cities around the world demanding urgent action on climate change and wildlife losses.

In the UK, Extinction Rebellion is calling on the Government to declare a climate and ecological emergency, to act immediately to halt wildlife loss and to reduce greenhouse gas emissions to net zero by 2025.