Matt Hancock could be out of jungle by FRIDAY

"We will find out soon if some people forgive him AND if they are willing to vote to save him and keep his jungle journey going." 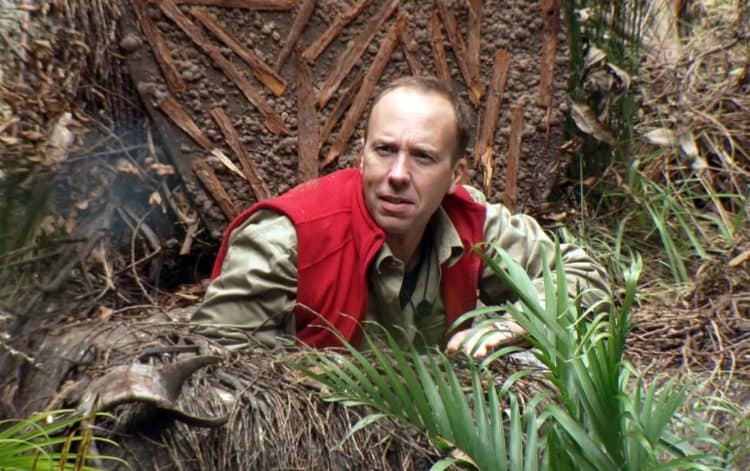 Matt Hancock could be the first I’m A Celebrity… Get Me Out of Here! contestant to be evicted – even though he joined the show late.

The 44 year old MP entered the Australian jungle alongside comedian Seann Walsh as moles, where they were tasked with secret missions while living amidst their campmates.

Now, show insiders have told Mirror that the first contestant to be kicked out of camp will be on Friday and Matt is amongst the favourites to get the boot.

“Things can change quickly in camp, especially if someone was to quit, but at the moment we look all set for evictions to begin from Friday,” a TV source said.

They added: “Currently Charlene [White], Scarlette [Douglas] and Matt [Hancock] are the favourites to go with bookmakers. If there is a second eviction over the weekend it means there would be two chances for viewers to get Hancock out this week.

“So much has been made of him wanting to look human and how he told the group in camp that he wants our forgiveness. We will find out soon if some people forgive him AND if they are willing to vote to save him and keep his jungle journey going.”

This comes after, medics were forced to rush into camp when Hancock yelped in pain after he was stung by a scorpion.

The creature attacked the MP shortly before breakfast today and nipped him unexpectedly leaving him yelping in pain.

A show source said: “Matt didn’t see the scorpion until it was too late and it bit his finger. He felt a lot of pain and made a yelping noise, but thankfully for him there was no lasting damage.

“Medics checked him over and gave him a clean bill of health but the whole camp is now watching out for them.

“Matt was saying afterwards it felt twice as painful as a bee sting.”

While Australian scorpions can give you a nasty sting if you step on one or take it by surprise, their venom is not deadly.

Associate Professor Bryan Fry, from the University of Queensland’s School of Biological Sciences, told ABC news: “Typically, the sting is minor localised pain and a tiny bit of swelling — usually quite trivial effects.

“As far as the pain sensation, the sting would normally be similar to a bee and dramatically less than that of the bullet ants that we have in Australia.”

Some fans may have heard Babatúndé Aléshé make reference to the incident on air at the very end of Saturday night’s show after it was revealed Matt would be doing the next Trial.